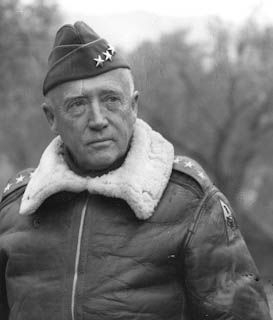 If you've studied military history or read any of our numerous articles that draw upon it for both inspiration and direct application to contemporary business logistics, then the picture above is of a man you're likely familiar with.

You've probably also encountered the following quotation by the same:

“Gentlemen, the officer who doesn’t know his communications and supply as well as his tactics is totally useless.”
— Gen. George S. Patton

I recently learned that the famed WWII general was actually third in the line of George Smith Pattons, the first of whom was a colonel in the 22nd Virginia Infantry during the Civil War fighting (obviously) for the South. Further, there have been two more George Smith Pattons after the man pictured above. 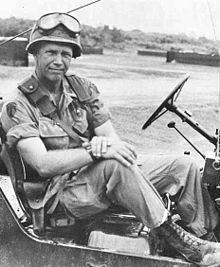 George Smith Patton IV, who dropped the Roman numerals after his father's death, followed in his father's footsteps, pursuing a career in the United States Army and rising to the rank of Major General. George IV's first mission was to participate in a logistical operation, supplying the people of West Berlin with desperately needed food and supplies, resulting from the Soviet blockade, Stalin's first post-war attempt at gaining control over the entire city. George IV went on to command in Korea and served three tours of duty in Vietnam. He was as respected as his father by the men he commanded, but my research gives me the impression that while Patton III was feared, Patton IV was loved.

I share all this with you because, while I could write a great deal on the subject of courage, I could not do so with the depth, intensity, and identity-level mastery of the subject that Patton III evinced. And while he may have had much to say on the topic in any of his inspirational (not to mention profanity laden) speeches to his troops, I doubt he ever expressed it as powerfully as he did in a letter written to his son on the day of the Invasion of Normandy — D-Day — June 6, 1944. Here is that letter.

---
Dear George:
At 0700 this morning the BBC announced that the German Radio had just come out with an announcement of the landing of Allied Paratroops and of large numbers of assault craft near shore. So that is it.

This group of unconquerable heroes whom I command are not in yet but we will be soon — I wish I were there now, as it is a lovely sunny day for a battle and I am fed up with just sitting.

I have no immediate idea of being killed, but one can never tell and none of us can live forever, so if I should go don’t worry but set yourself to do better than I have.

All men are timid on entering any fight; whether it is the first fight or the last fight, all of us are timid. Cowards are those who let their timidity get the better of their manhood. You will never do that because of your blood lines on both sides. I think I have told you the story of Marshall Touraine who fought under Louis XIV. On the morning of one of his last battles—he had been fighting for 40 years—he was mounting his horse when a young ADC [aide-de-camp] who had just come from the court and had never missed a meal or heard a hostile shot said: “M. de Touraine it amazes me that a man of your supposed courage should permit his knees to tremble as he walks out to mount.” Touraine replied, “My lord duke, I admit that my knees do tremble but should they know where I shall this day take them, they would shake even more.” That is it. Your knees may shake but they will always take you towards the enemy. Well, so much for that.

To be a successful soldier you must know history. Read it objectively — dates and even the minute details of tactics are useless. What you must know is how man reacts. Weapons change but man who uses them changes not at all. To win battles you do not beat weapons — you beat the soul of man of the enemy man. To do that you have to destroy his weapons, but that is only incidental. You must read biography and especially autobiography. If you will do it, you will find that war is simple. Decide what will hurt the enemy most within the limits of your capabilities to harm him and then do it. TAKE CALCULATED RISKS. That is quite different from being rash. My personal belief is that if you have a 50% chance, take it, because the superior fighting qualities of American soldiers lead by me will surely give you the extra 1% necessary.

In Sicily I decided as a result of my information, observations and a sixth sense, that I have that the enemy did not have another large scale attack in his system. I bet my shirt on that and I was right. You cannot make war safely, but no dead general has ever been criticised, so you have that way out always.

I am sure that if every leader who goes into battle will promise himself that he will come out either a conqueror or a corpse, he is sure to win. There is no doubt of that. Defeat is not due to losses but to the destruction of the soul of the leaders. The “Live to fight another day” doctrine.

What success I have had results from the fact that I have always been certain that my military reactions were correct. Many people do not agree with me; they are wrong. The unerring jury of history written long after both of us are dead will prove me correct.

The intensity of your desire to acquire any special ability depends on character, on ambition. I think that your decision to study this summer instead of enjoying yourself shows that you have character and ambition — they are wonderful possessions.

Soldiers, all men in fact, are natural hero worshipers. Officers with a flare for command realise this and emphasize in their conduct, dress and deportment the qualities they seek to produce in their men. When I was a second lieutenant, I had a captain who was very sloppy and usually late, yet he got after the men for just those faults; he was a failure.

The troops I have commanded have always been well dressed, been smart saluters, been prompt and bold in action because I have personally set the example in these qualities. The influence one man can have on thousands is a never-ending source of wonder to me. You are always on parade. Officers who through laziness or a foolish desire to be popular fail to enforce discipline and the proper wearing of uniforms and equipment not in the presence of the enemy will also fail in battle, and if they fail in battle they are potential murderers. There is no such thing as: “A good field soldier:” you are either a good soldier or a bad soldier.

Well this has been quite a sermon, but don’t get the idea that it is my swan song because it is not — I have not finished my job yet.

Your affectionate father.
---
The title of this article is taken from that letter. I changed a single word and transformed it into a blessing. While most of us will never see war, business is no less a battlefield engagement, one in which your life may not be on the line, but your livelihood is.

And so, as you face the day's challenges and fight the forces that seek to steal your resources and defeat you, I say, "Your knees may shake, but may they always take you towards the enemy," and wish you, "Good hunting!"

Worried About Employee Turnover? It Takes Motivation, Trust, Social Media and a Clear Vision to Keep Them From Looking