"Every employee tends to rise to his level of incompetence."

If you read the cynical but deadly accurate satire "The Peter Principle," you may come to believe that getting "kicked upstairs" is not a good thing. This book, written by professor of education Laurence J. Peter and journalist Raymond Hull, is a satire based on significant research Dr. Peter conducted and first presented in September 1960. In it, Peter defines promotion as "an upward movement from a level of competence” (p. 158). 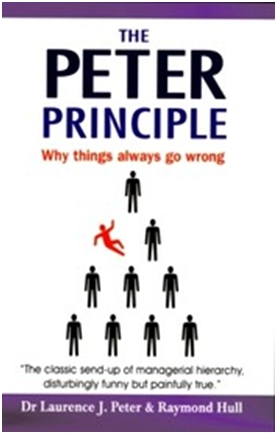 Peter chose to first present his research as satire to a group of directors of federally funded educational research projects. “As I became aware of their plan to spend time and taxpayer money on rediscovering the wheel, I decided to explain their predicament by introducing them to the Peter Principle,” writes Peter in the forward of the book.

The men who attended that first presentation did not necessarily enjoy Dr. Peter’s satire. Each had written successful grant proposals, and they had been rewarded with promotions to positions in which they were responsible for directing various research projects. Some of these people actually had research skills, but these skills were irrelevant to their new positions. Others were inept at research, though perhaps competent at writing grant proposals. The directors' reactions to Peter's presentation were a mixture of hostility and laughter. One young statistician laughed so hard he literally fell out of his chair, later confiding that his reaction had been due both to the humor of the presentation and the sight of the research directors' faces turning various shades of red.

For satire to work, it must reflect life accurately enough to resonate with the audience. Satire always depends on facts, the more accurate the better. Peter focused on small examples of human behavior, and he accurately described that behavior.

Those of us who toil in middle-management positions have all heard our colleagues say that the executives leading the parade don’t know what is going on. How many times have you thought that the CEO was clueless? It is easy to paint senior leaders as incompetent, or that they have been percussively sublimated (kicked upstairs) into positions where they can do less harm.

The Peter Principle asserts that the most competent people must be in the lower ranks, for, as the cream floats to the top, it sheds competence. Peter also asserts that hierarchy spits super-competent people out of the organization because of the damage the super-competent can do to the organization. In the world Peter describes, what is left is the political infighting of rising incompetents and the damage control efforts of middle managers.

Omnipresent incompetence; it's frightening to think that we can't get away from it. In a bad nightmare, legions of incompetent people chase us down darkened hallways and into rooms with no exits. Is this a nightmare? Perhaps it is nothing more than a daydream.

Start asking people about the cause of this problem and you will get plenty of theories. Parents will blame it on kids not learning how to work efficiently. Teachers will blame politicians. ADF will blame churches. Churchmen will blame television and video games. Trade unions blame management and management blames the unions. Conservative politicians blame welfare. Social workers blame moral laxity and the breakdown of the nuclear family. The explanations are as bad as no explanations.

"In time, every post tends to be occupied by an employee who is incompetent to carry out his duties." — Peter's Corollary

I think that the accusation of incompetence is far too easy to make. What you see as incompetence could be nothing more than just plain laziness, apathy, greed, or malice.

The mechanic repairing a forklift truck who cuts the insulation off a wire in order to create the opportunity for a short circuit. When the wire shorts out the circuit, the truck fails, creating more work for the mechanic. This is malice, not incompetence.

The clerk typing item descriptions into a spreadsheet who fails to check for errors. This is an example of sloth, not incompetence.

The truck loader who doesn't use tie straps to hold the load in place. This is an example of laziness, not incompetence.

I once worked with client who had a frustrating habit of labeling poor performance as incompetence. Mere sloppiness was incompetent. Failure to cope with an overwhelming workload was an example of incompetence. The inability to pay attention became incompetence. When I challenged this client to stop using that word, to replace incompetence with more accurate definitions, he couldn't. The employees of that company swiftly learned not to make decisions on their own, but to wait until the boss told them how to do their jobs. Eventually, the boss became incompetent.

Not Just Promotion, but Demotion

Another client ran a business in which managers did the work of clerks and administrative assistants. These managers typed memos, made travel arrangements, and struggled to use the calendar tool in Outlook to reserve meeting rooms. I observed three specific managers for the week that I worked with a department as part of a larger project. They spent almost a third of their working time doing things that a competent administrative assistant could have done in less than an hour.

Manager productivity dropped quickly as department managers struggled to correct their own memos and make their own travel arrangements. Sales decreased as field salesmen started to enter orders into the systems that their administrative assistants had once used. Performance reviews lagged, budget updates didn’t happen on time, and purchase orders were entered late or not at all. As I watched, I estimated the lost revenue. I listened to employee complaints about poor reviews, or reviews that did not happen at all. When I totaled my estimate, the weekly cost was about twice the payroll savings.

Incompetence? Yes. The company had demoted these managers into positions of incompetence.

It's Your Leadership Legacy! Do You Have a Formal Exit Strategy?