How Slow Must You Go
to Win?

I'll begin with a quotation, following it with a short fable and then one last quotation.

The fable:
The Hare was once boasting of his speed before the other animals. "I have never yet been beaten," said he "when I put forth my full speed. I challenge anyone here to race with me." 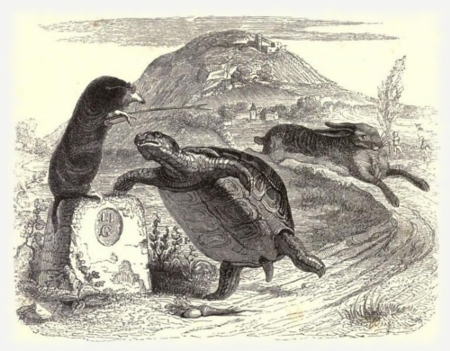 The Tortoise said quietly, "I accept your challenge."

"That is a good joke," said the Hare; "I could dance round you all the way."

"Keep your boasting till you've beaten me," answered the Tortoise. "Shall we race?"

So a course was fixed and a start was made. The Hare darted almost out of sight at once, but soon stopped, and to show his contempt for the Tortoise he lay down to have a nap. The Tortoise plodded on and plodded on, and when the Hare awoke from his nap, he saw that the Tortoise had nearly reached the winning post, and he could not run up in time to save the race. Then said the Tortoise:

And quotation #2:
"The idea of this hike is not to see who can get there fastest. The idea is to get there together."

Any practitioner who reads our articles regularly will recognize the first quote from Sun Tzu's "The Art of War." Anyone who's ever attended elementary school will recognize Aesop's fable of the Tortoise and the Hare. The second quotation comes from a source only slightly less famous in modern times than the first two, Eli Goldratt's paradigm-shifting work, "The Goal."

I share them because a recent conversation with my buddy Chris triggered an epiphany that caused these three literary sources to suddenly burst forth into my mind. I was struck with the kind of clarity that can only be achieved when something known intellectually penetrates the mind-heart barrier and is truly internalized. The kernel of this newfound wisdom came in the form of a question: "How slow must you go to win?"

Chris invited me to be on his team for the upcoming Savage Race, described as "an intense, five to seven mile obstacle run, with 25 world-class obstacles, [including] mud, fire, and barbed wire." These are serious events with thousands of participants, and they are growing in popularity across the country. They offer excitement, physical challenges, and the real risk of injury to a middle-class culture that has grown soft. Ours is a contemporary society in which survival is all but guaranteed, but we still desire action and excitement—as long as it's in a controlled environment. These are the people who always fantasized about joining the military but took a different path in life. And like Chris, many participants are former military themselves. (I don't mean to sound at all disparaging; I'm just being tongue-in-cheek. I actually think such events provide a much-needed outlet for people in search of adventure and camaraderie.) 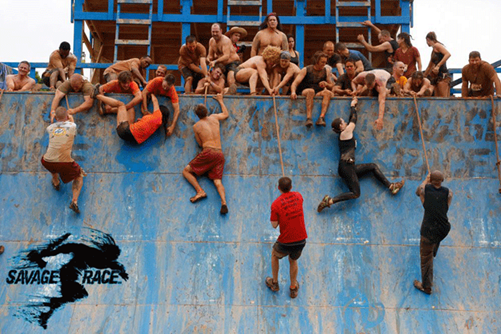 My first reservation upon receiving the invitation was a predictable one: "I don't think I'm in good enough shape for that."

Chris, who goes to the gym daily and is in excellent physical condition, responded nearly as predictably. "Don't worry, man. You'll be fine. You don't have to be an athlete, and you can skip any of the obstacles you think are too challenging. We all run as a team, anyway."

I wasn't convinced. "That may be the case. But I can't stand the idea of holding the team back if I'm just plodding along or if I get stuck in the barbed wire or something." I'm pretty sure I used that exact term, plodding.

"Dude, you should see some of the other people on the team," he responded. "You're in great condition compared to them, believe me. Besides, we have to work together in order to get over the obstacles. You can't do it alone. It takes teamwork. We start the race as a team, we finish the race as a team, and everyone makes it to the end that way. And we all have a great time."

It's at that point I heard the voices of Sun Tzu, Aesop, and Eli Goldratt all speaking to me simultaneously in the warped harmony that is the subconscious mind. (Though perhaps it's not so mystical considering that, coincidentally, I'd just read the story of Alex Rogo's hike from "The Goal" the day before.)

In the business world today, the prevailing theory is that in order to succeed, one must work all hours at a break-neck pace. Time is money, after all, and you can rest when you're dead. We must sacrifice everything on the sacred altar of productivity.

So when Eli Goldratt teaches us that a manufacturing plant in which the entire staff is working all the time is an inefficient operation, you have to wonder whether all that hard work you're doing is increasing profits or diminishing them. Are you plodding like the tortoise or are you racing like the hare? Are you spending time performing calculations in your temple, or are you jumping straight into battle?

How slow must you go to win?

In another article, we'll discuss how modern-day behemoths like Google, Apple, and IBM value time, and search for a possible correlation:  why do the first two continue to finish the race while the third appears to be losing its momentum?

Give a Little: You'll Get a Hell of a Lot More Than You May Realize

Just One of the Guys...Again