Don't Hire Communists:
A Response to Inc.'s "How to Share Company Financials With Your Employees" 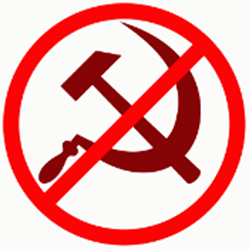 Dave Schneider shares the complete company financials with every member of the David K. Schneider & Company team to keep us informed of the company's progress and overall health as we work toward our goals for cash flow and growth. As an introduction, he sent us a link to an article on Inc. magazine's website entitled, "How to Share Company Financials With Your Employees" [original article here], and solicited our opinions of the advice it gives. Not only was it prominently featured at Inc., it was, unsurprisingly, linked to by numerous SMB consultants on their blogs and praised as the gospel truth, a not-to-be-missed missive for every small- to medium-sized business owner.

But let's stop for a moment and put it into perspective. The article is actually wrong in about six different ways. It's also a very poorly written attempt to turn bullet points into prose. And it's the exact kind of spineless business writing that makes me reach for Excedrin and Pepto-Bismol.

Let's take a closer look at some of the counsel it offers:

"The primary goal you want to accomplish is to demonstrate that your company is stable and an organization of substance." Is that the primary goal? Or is the primary goal to establish the connection between the performance of each member of the team and the health of the company?

“If you were a business making a lot of money you may want to show that, the bad part is it could make negotiations with your employees difficult." Only if A) you are too greedy or ignorant to provide some type of reward to employees based on company performance, B) you are a weak negotiator, or C) you have a tendency to hire communists who don't understand that company profitability is a good thing. Would you rather work for a company making lots of money or one that's unprofitable and riddled with debt?

"Also avoid sharing salaries, as that could lead to personnel drama and jealousy." Or better yet, be fair and consistent in your compensation and be clear about the reasoning behind any differences. Also, hire mature adults and don't hire communists who will expect to paid equally regardless of their performance and actual contribution to the company.

“'You should never give raw financials because they wouldn't make sense,' says [Family Business Institute president Wayne] Rivers. 'Its just gobbledygook unless they are accountants. You should present information in digest or summary format.' … 'Use percentages, bar graphs and pie charts,' Rivers advises if not to help get the message across, then perhaps away to avoid sharing exact digits." Also, use as many monosyllabic words as possible and avoid sentences with multiple clauses that might confuse the team of communist monkeys you've hired. Or maybe you didn't hire communist monkeys, in which case you should either show a little more respect for your employees' intelligence or admit that you're the one for whom the raw financials are gobbledygook.

"Make the amount of financial information you routinely share standard. That way, when someone asks uncomfortable questions beyond the mold, you have the leverage to use a line suggested by Sloane." Better yet, ban the asking of uncomfortable questions altogether in your company bylaws. No one is allowed outside of the mold on pain of their contract being immediately and irrevocably voided. For the great Lenin has lighted the way!

"The road to getting employees to care about company financials (the way you want) is long. 'It takes years, not weeks, not months but years,' says Rivers."  Were I principal of a company with employees, the road to getting them to care about company financials would be about four minutes long. If they don't care within four minutes, they're 95 percent of the way out the door. And they should remember to take their Che Guevara shirts with them.

I don't advocate a totalitarian approach, but I do believe that expecting an employee to care about their company's performance and cash flow should be elementary. I believe that expecting employees to behave like mature adults in issues concerning compensation is obvious. I believe that fostering an environment that encourages probing questions about company health, performance, and direction will do nothing but good, as compared to drawing lines around so-called "uncomfortable" subjects, which will foster doubt and insecurity. Every employee has a vested interest in the company; they deserve the full truth.

I'm familiar with a number of companies that take an entirely different approach to sharing company financials with employees than what Inc. recommends. David K. Schneider & Company is one such company. And the end result? Stronger cohesion within the team, a greater sense of personal accountability, and a powerful motivation to perform in order to help the company reach its financial goals, because if it does, everyone will benefit.