The atmosphere in the DC conference room was depressing. Dr. No had shot down multiple ideas for fixing the root cause of the problems. They thought the problem was in picking. We knew the problem was the lack of trucking capacity. The direct approach did not work, and Dr. No challenged us, declaring, “I still don’t get why you are talking about the dock and shipping. That is not where our problem is. Our problem is that our pickers suck!” With the Mexican standoff between the DC GM, Dr. No, and me, I really needed to get the DC GM to see the connection between where he felt the pain and the real problem.

I walked over to the white board and on the left side wrote the words Effect and Cause. “Think of how you unload a trailer.” I started, while writing the words on the board. “You unload from the tail of the trailer to the nose. I have found that to be a great way to think about unraveling capacity problems. Let’s start at the tail and take the problem apart.” 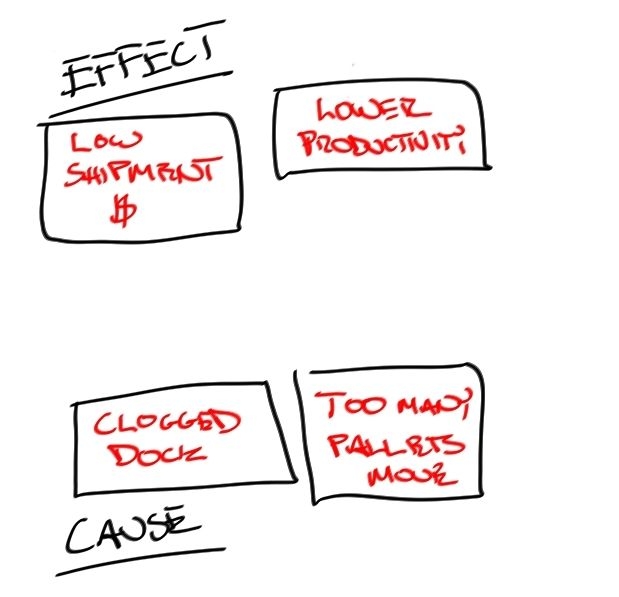 “Now what does the clogged dock do to the operation?” I asked the room. Nobody spoke up. I waited. It got a bit uncomfortable. Finally someone spoke.

“We lose pallets?” said someone.

“Freight gets damaged,” said someone else. “And we handle the pallets too many times,” chimed in a third.

“Ok. So when the dock gets backed up, we handle pallets too many times,” I said, as I wrote “too many pallets move” in another box on the bottom row. “That hits our dock productivity,” I said, as I created an EFFECT box with “lower productivity.”

“Yes, those are all outcomes of a clogged dock. But what happens upstream in the building?” I asked.

Quiet again for about twenty long seconds until somebody said, “We run out of dock space.”

“Yes, we run out of dock space! Then what happens?”

“The pickers have no place to put their pallets!” came a voice from the rear of the room. It was Dr. No. “And when they run out of space they stage in the aisles, or just slow down!”

I kept writing CAUSE and EFFECT boxes as they shouted out problems.

“We lose pallets and have to search for them,” went into a CAUSE box to the right. I watched the room for a few moments before filling in the EFFECT box above with “wasted effort.”

“The auditors run out of room too, so they don’t get to check as many orders,” said another supervisor. In the next CAUSE box I wrote “Not enough room for audits” and then filled in the EFFECT box above with “Poor Quality.”

We kept going until I had filled the white board with a chain of Causes and Effects. A chain of causes lined up behind the one issue; the Clogged Dock. Above the causes came a chain of EFFECTS – undesirable outcomes that grew from the cause below it.

I wrote across the top of the board “Where is the real cause?” and looked at the room. “Where do you think the first cause is? Which one starts all the rest? 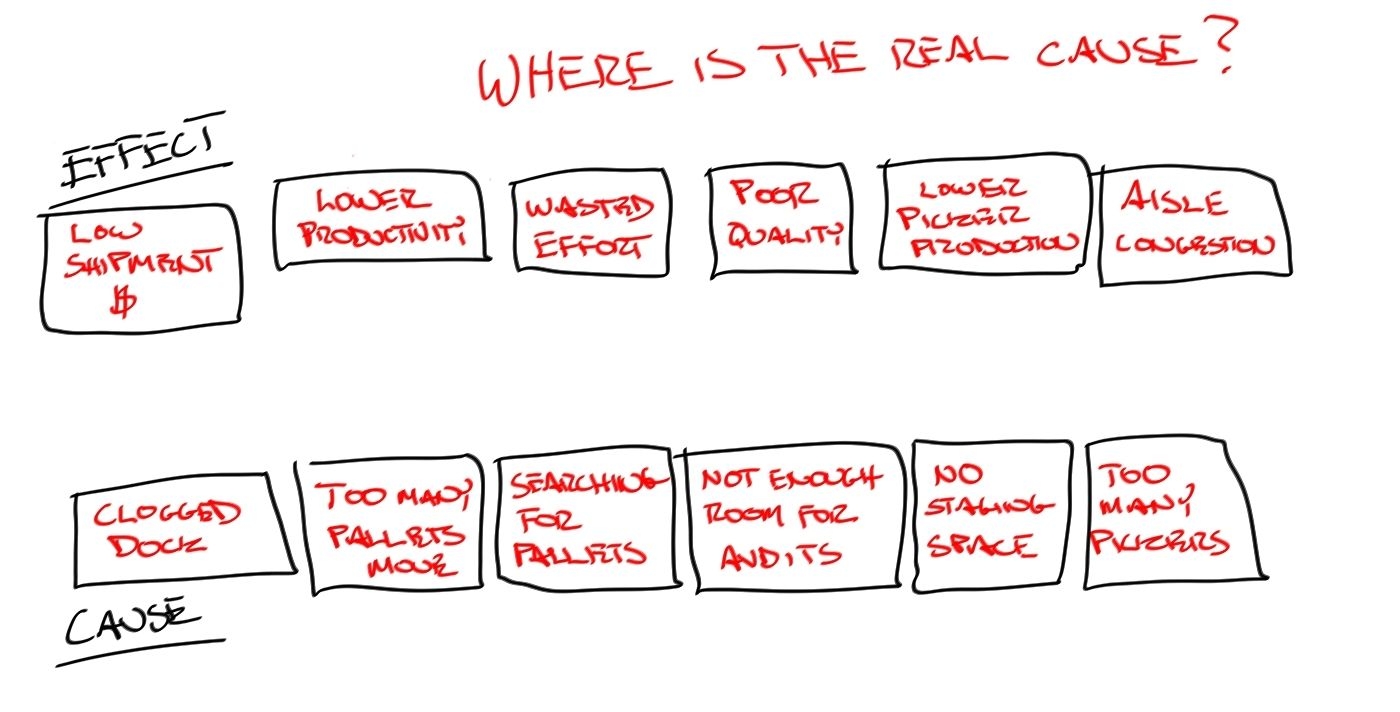 We had worked the problem backwards. As you looked at the chain of causes and the corresponding effects, it was hard to make the claim that the problem started in picking. When nobody said anything, I asked, “Does too many pickers clog the docks?” Around the room heads moved from side to side.

I started to draw arrows between the causes and the effects. The first one pointed from Too Many Pickers to Aisle Congestion. Again, I asked the group to tell me where to draw the next arrow. Somebody said “No Staging Space to Aisle Congestion and another from No Staging Space to Lower Picker Production.” We went like this until we drew causation arrows between each of the causes and the matching effects. The direction of the diagonals helped to tell the story that the problem really was the clogged dock.

“What really is our goal?” I asked. “Is our goal to increase our shipment volume or is it to increase picking productivity?” People hesitated, debating about which one was really the important measure. “If you could have only one goal to measure, which is the most important?”

Looking directly at the DC GM I asked, “Which one is going to get you into trouble if you don’t fix it?”

“Low Shipment Dollars,” was his simple answer. I quickly wrote above the Low Shipment $ box, “We Must Increase Shipment $.”

“If you walk out onto the dock today, how many Shipment Dollars are sitting on your dock, picked, ready to ship? How many shipments are all dressed up and waiting to go?”

Using a blue pen, I wrote “Fix This First” under the Clogged Dock Box. Then drawing an arrow over to the other side of the board, pointing to “Improve Productivity,” I wrote “To Fix This!” 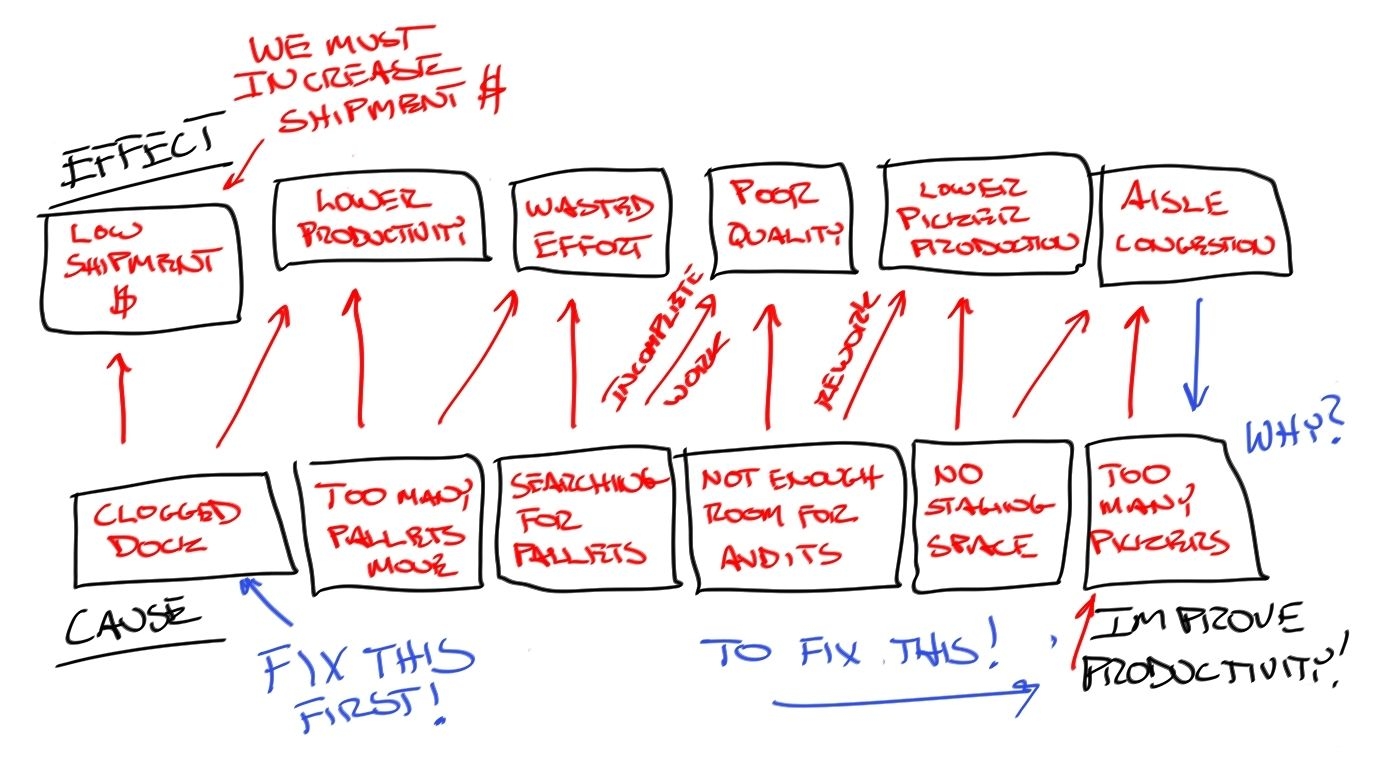 “What do we have to fix first?” I asked. “The clogged dock,” said the DC GM. Dr. No said nothing. We had broken the Mexican standoff.

“Now to fix the problem, we have to divide and conquer,” I started. “And there are at least three options for each problem.”

“Let’s deal with prepaid shipping first, “I said. You have plenty of dock doors to work with, so you can ask your primary carrier to spot more trailers. That way you're not waiting for the carrier’s driver to swap the trailers. You can ask for more swaps, but you can never be sure if they will have a driver ready when you need one. So I recommend that you double the number of trailers on the dock and get more trailers pulled each day."

“They won’t do it,” said Dr. No. He had been quiet for some time. This was his chance to throw a bucket of cold water on our progress. It wasn’t going to work this time.

“How do you know that?” I challenged. Softening my voice, I asked, “Have you actually talked to the terminal manager about your problems?” The room was quiet for about five seconds. Everyone looked to Dr. No to see if he was going to answer.

“Well, I guess you haven’t. Fine, we can consider that settled. You don’t know until you ask. And I think the carrier will do what you ask them to do. You are spending millions of dollars with them, so getting more trailers here is in their best interest.” I let that sink in before moving on. “First, let’s put a plan of action together”

With that statement, positive change started.