Noun:  The center of interest or activity. Verb:  To bring to a focus or into focus; to concentrate; to adapt to the prevailing level of light and become able to see clearly; to become focused.

One thing is common to all failed operations:  a lack of focus on the inherent simplicity of the problem. The problem is not that people are stupid. I myself have overlooked the inherent simplicity of many problems, tied up in unnecessarily complex operations, the complications created by ego and emotion. Good managers fall into traps all the time, failing to confront missing accountability, bitching and complaining instead of solving the problem.

There is a huge difference between symptoms and causes. There is a tendency when the alligators of operational problems are biting your ankles to want to reach for a gun and shoot the overgrown lizards. While we busily blaze away, more alligators pour in because someone forgot the close the gate. The problem is not that we are running out of ammo — it is the open gate.

Great leaders remember not to say, “I know.” Great leaders say, “Let’s make sure.” So are you making sure that your people focus on the root causes of your problems, or are they just shooting the alligators?

When Abnormal is Normal

When the building is new, people don’t know where important places are, like the restrooms, or the cafeteria, or even the shipping dock.

Think that last one is strange? A few years ago, I was observing the operation of a large Distribution Center, working with the shipping manager to figure out how orders got lost in the three-week-old, 500,000 square-foot building. Orders were getting lost between picking and shipping. The WMS tracked the movement of every pallet in the building; lift truck drivers had to scan the pallets to pick them and then scan them into a location to drop them. The AWOL orders were scanned into staging locations, but never appeared in the physical locations. The shipping manager and the picking managers could not explain it. The pallets just disappeared. The two managers would look and look for the pallets, but not find them. In frustration, they would re-issue the same work unit for expedited picking, doubling the work and holding up the release of the shipment.

The managers declared that it had to be a glitch in the system. The WMS support team said it could not be; they had tracked the process when observing the pickers and assured that the system was working.

It was my first day on site. I decided to focus on this as a quality problem in the Gemba, (Japanese for "the place where work is done") and by directly watching what happened in the staging location. I learned that the staging locations where the pallets went missing were on the receiving side of the building, so I walked over there to watch the operation for a few hours.

In two hours, I did not see a manager walk by me. Not one. I watched the pickers put pallets into staging locations, scanning the barcode on the end of the rack row that identified the staging location. Not long after, a lift truck driver would slide by, scan the pallet ID label, and haul the pallet over to shipping. It looked like the process worked. Still, I decided to hang around for another hour watching the operations, taking notes of what I could see from my vantage point. 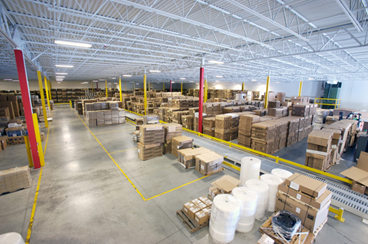 At two of the staging locations sat a trash dumpster. The dumpster was more like a towable cart. Pallets in the staging zone surrounded the cart. While the pickers could get to the cart, the cart was locked in place by the staged pallets. It did not look like a problem, since the pickers could get to the cart. However, the custodian who collected full carts and dropped off empty carts did have a problem — he could not get to his carts. So, to make room to get to the cart, he would grab a pallet jack from the receiving dock, and move the pallet from the staging zone across the traffic aisle to the receiving dock, then grab the cart.

I now knew part of the story, the part of the disappearance. But what about the reappearance? That took a visit to the receiving dock at the end of the shift. I returned to the area near the end of the shift, and observed a receiving operator moving the pallets back into the staging location. He could not scan onto the pallet to move it — it was not his job code, so the system did not allow it. But he could scan the pallet and look up where it was supposed to be, and move it back. And that is what he did.

The real art of getting a start-up operation normalized lies in an effort on the part of management to focus on and lead in the Gemba, being present to help people make things normal. If leadership is not constantly present in the Gemba, things happen that a system cannot track.

If you want your start-up to fail, focus on the screen on your desk and spend no time in the Gemba. Victorious generals focus on the field, working with and training their troops so the soldiers know what to do when it comes to execution, and so the general knows his troops are ready.