Could the Pocket Notebook be the Effective Manager’s Most Useful Tool?

It might not surprise many of my readers to learn that journalism was my first career. I worked as a photographer first, and a writer second. My writing skills earned me assignments that I would not otherwise have gotten, because the attitude in many newsrooms was that the writers were the real journalists. That I could do both gave me an advantage over other photographers—and other writers—both in getting the assignment and getting the story.

That advantage had to do with what was in my hands as I worked the story. Photographers carried cameras and writers carried notebooks. 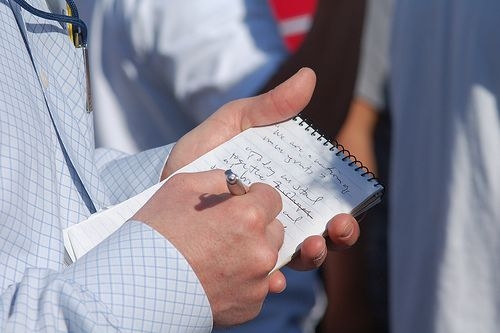 When working a story, I always carried my camera in my hands and my reporter’s notebook in my back pocket. People would see the camera and feel more at ease talking to me because I was taking pictures and not taking notes. Then I pulled out the notebook so that I could record the people’s names for the captions. “I want to make sure I get the right spelling for the editors,” I would say. After getting the name, I sometimes could keep scribbling my notes. Most times I would slide the notebook back into my pocket, ask a few more questions, and listen carefully to what people had to say.

After I returned to the car, my notebook work really started. I dumped my memory out into the notebook, sometimes talking aloud as I remembered what the person had said. I found that I was better at remembering quotes when I actively listened and took notes right after the interview. Not taking notes during the interview enabled me to watch my subjects’ expressions while they spoke; I found that if I kept my nose down, scribbling in the notebook, I missed half the story.

When I turned to my new career, this practice served me well as a manager.

The Notebook as a Tool for Promotion

I worked 40 hours a week to support myself when I went back to college to get my second degree in Industrial Management. That last year in school I worked at a Payless Cashways Building Materials store in Springfield, Missouri; first in the lumber yard and then inside the store. On my first day, the office issued me a number of items for the job:  a hard hat for the yard, some work shirts, a lumber pencil, a tape measure, and a pocket notebook.

When fall turned to winter that year, the store laid off many of the part-timers. I got to stay on. In fact, as the winter turned bitter cold, the yard foreman “promoted” me, expanding my area of responsibility to include one of the warehouse buildings. Getting an extra 25 cents an hour was good, but having a place to work that was out of the cold winter rain and snow was even better. I asked both the supervisor and the foreman why they had promoted me rather than another guy who had worked in the yard longer. “You get things done,” said Jody. “And you take notes. I think you have used at least six of those pocket notebooks.”

That was when I started to pay attention to the other guys in the yard. Except for the two supervisors and the foreman, I was the only one in the yard who had a notebook in his pocket. Everyone else depended on his memory. Once in a while the other guys would ask for a page out of my notebook, but none of them carried one.

A few months later, an opportunity appeared in the store in the hardware department. The sales supervisor noticed how I’d straightened up the inventory in the warehouse building, where we kept most of his department’s large items. He praised my work to the yard foreman, and attempted to transfer me into the store. The foreman told me about the opening, saying that he hated to lose me, but it would mean another 50 cents per hour in pay.

I pulled out my notebook and did some math. At 30 hours per week, the extra $15 per week might be insufficient to induce me to make the move to a harder job. When I talked to the store supervisor—with my notebook in hand—I showed him my math and explained how the extra $15 per week was not worth the harder work. I then wrote down a number, tore out the page, handed it to him, and said, “That is what will get me to take the job.”

The next week I was working in the store, with a full dollar-an-hour raise, and better hours.

The Notebook Is Our Friend

Over the years, my notebooks changed. The 29-cent pocket spiral-bound stayed with me through my time as a warehouse supervisor and manager. When I moved upward to the corporate office I switched over to 3 X 5 index cards. Those worked well for a long time, but I would sometimes lose cards. The cards also lacked the necessary stiffness for writing in the palm of my hand, unlike the little notebooks.

As the job grew I started to use full sheet pads on a clipboard. At first I carried a cheap Masonite clipboard and the yellow pads. My DC manager gave me a nice full-sheet vinyl folio with my name on it when I moved up to the corporate office. When I became a consultant in the early 1990s I bought a leather folio with full sheet pads. In fact, I still use a beat-up, almost worn-out leather folio when I visit clients in their offices for the first time. When working in any warehouse, my main tool today is a full sheet pad on an aluminum clipboard.

Still, I always have the pocket notebook.

I upgraded the pocket notebooks over the years. While I keep the cheap top spiral pocket notebooks in the glove box of the truck, what I carry in my pocket is now much more upscale. When I still used the 3 X 5 cards, I carried a leather wallet that kept them together and gave me the stiff surface I needed to write notes in the palm of my hand. When the Moleskin notebooks came back onto the market, the classic black with the ribbon page marker and the elastic band became my new tool. Last year one of my team members gave me an English Smythson Panama, a soft, leather-bound book with a place-marker ribbon, the cover inscribed in gold: “Inspirations and Ideas.” The featherweight paper pages are super thin but strong, packing many pages between the covers.

Good managers take notes. Great leaders take notes. You may not see them take notes, but they do. The first step to taking notes is making sure you have a notebook. In these times, when computers and smartphones abound, perhaps the most useful tool is a pocket notebook.