What Is the Future Price
of Oil?

If you are considering using natural gas as an alternative motor fuel to diesel, the question you should ask is not what is the price difference between NG and diesel today, but what will it be next year, the year after, and in five years.

How good is your crystal ball when it comes to oil prices? Oil is the deciding factor in this economic decision, not the price of natural gas.

Price changes in the natural gas market do not matter. In fact, double the price of the gas, the commodity itself, and the price of delivered LNG will not exceed the cost of diesel.

Don’t believe it? Just read on.

Understanding the economics of using natural gas as a fuel is made challenging by the compounding conversions needed to analyze the problem. The conversion is not simple, since both volume and energy content determine the equivalent conversations.

The challenge is like determining the equivalence between Apples and Cucumbers. They are both found in the produce department, but each contains different food energy values. Each sells at different prices.

Petroleum products are naturally liquids, so gallons and liters are the standard units of measure. Natural gas, in its normal state, is a gas. But when subjected to unnatural (man-made) conditions, natural gas can be a liquid,.

As we discussed in earlier installments of this series, natural gas is not as energy-dense as diesel. A gallon of diesel has about 139,000 BTU (British thermal units) of energy, while a gallon of LNG has 82,644 BTU of energy. It takes about 1.68 gallons of LNG to generate the same energy as a gallon of diesel.

Pricing adds another form of conversion to the mess. The 42 US-Gallon barrel is the unit of measure for the pricing and sale of crude oil. In February 2014, West Texas Intermediate (WTI) sold for about $100 per barrel, so the crude cost was $2.38 per gallon. The average US price of diesel at the pump was about $3.97 per gallon, about $1.59 in the spread between crude and retail at the pump.

Retail diesel carries a healthy per-gallon fuel tax at the pump. While taxes vary by state, they average about 27 cents per gallon in the US. Subtract the taxes, and the cost for a gallon of diesel is about $3.70 per gallon, FOB refinery.

Removing the tax, the oil companies have about $1.55 in gross profit to transport the crude, refine it, and transport it to the pumps. Along the way from the well to the pump, a number of beaks dip into the money stream, each taking a part of the profit to cover costs and make some profit.

Oil companies distill diesel fuel from crude oil at refineries. Oil companies invest hundreds of millions of dollars in capital to build the refining infrastructure. While refineries are long-life assets, the oil companies still need to continue to invest capital to replace and improve operating equipment. The labor and operating expenses of these huge fuel factories are almost as immense as the investment. Add in a reasonable return on investment in the form of profit, and cost for transport.

In all, the manufacturing, logistics, and profit margin is about 42% for diesel. Remember that as we work through the conversion factor for LNG.

How Much Is That Gas? 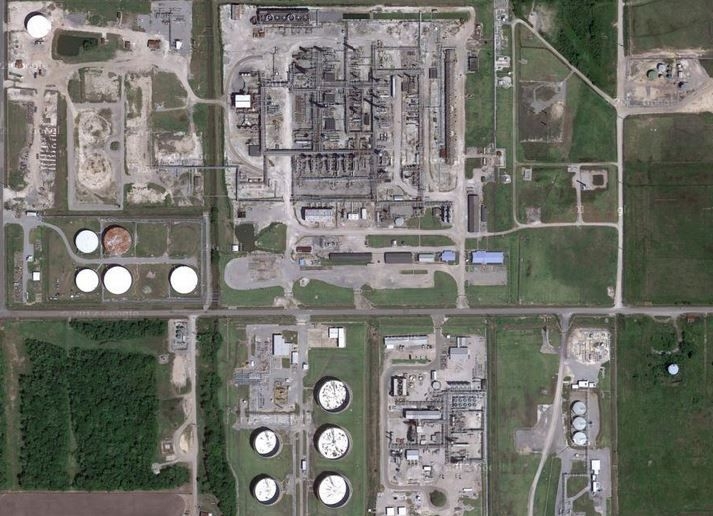 The pricing point for North American Natural Gas futures trades on the NY Mercantile Exchange and over-the-counter contract trades is the Henry Hub, the point where 13 different pipelines interconnect in Erath, Louisiana. The Henry Hub was the place from which natural gas flowed from production to consumption in the US until the tight shale development started a decade ago. Like its cousin, Cushing, Oklahoma, the Henry Hub is part of the history of the North American energy markets, established in the early days of interstate transport of energy by pipeline.

In January, 2014, the price for 1 million BTU of gas at the Henry Hub was $4.85. That is the price of the gas in its natural form, not as a liquid, and not as a diesel equivalent.

Let’s convert the cost of the gas into the energy equivalent of diesel.

First, we have to change the gas into a liquid. If we chill 82.6 cubic feet of natural gas to over 260 degrees below zero, we make one gallon of liquefied natural gas. Each cubic foot of gas is equal to 1,000 BTU, so a gallon of LNG contains 82,644 BTU of heat energy.

Remember, WTI Crude Oil costs $2.38 before we make it into diesel. Based on our math above, the gas needed to make enough LNG to equal a gallon of diesel is 67 cents. The cost of the crude oil is 3.55 times the cost of the natural gas.

What Do You Think the Price of Oil Will Be?

This brings us back to my original argument:  it is not the price of the gas, but the projected future price of oil that drives the conversion from diesel to LNG as a motor fuel for freight transportation. The base cost of the gas can double, from the current 40 cents to 80 cents, and LNG is still over 40 percent less cost than the crude needed to make diesel. 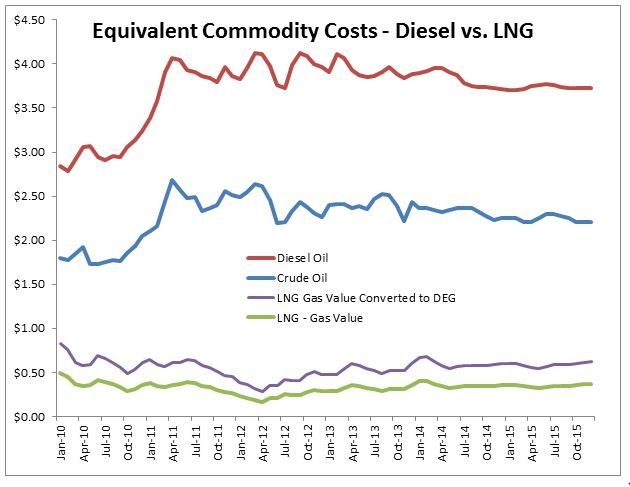 ​​​​​​​There is a cost behind the conversion of natural gas into LNG, along with the transportation and distribution. Like oil refineries, natural gas liquefaction facilities require substantial capital investment. The transportation infrastructure necessary to move the cryogenic liquid requires investment, as does the retail filling station infrastructure.

We calculated a 42% margin for the conversion of crude into diesel. If we apply that same margin to the commodity cost of natural gas, the cost for a DGE of LNG is only 56 cents.

Pricing for LNG is much higher where it is available. As I write this article, LNG is selling on the retail market for $2.59 to $2.69 per DGE. If the commodity cost of LNG is 40 cents per DGE, then the cost of conversion from gas to liquid, the investment cost for the distribution infrastructure and the stations, is nowhere close to a point of efficiency. Obviously, the effort to build the liquefaction plants and the required fueling infrastructure is early cycle, and early cycles are always the high-cost period of any rollout. As LNG use increases, more liquefaction plants and more fueling stations will appear. Investors will back more companies to build out the fueling infrastructure. More stations building more supply, creating more demand, will create more competition, driving costs lower.

If the cost of oil increases, the argument for switching to natural gas becomes more compelling. The question is:  when does it make irresistible sense to convert?

The following video is about one of the ways the cost of building the LNG infrastructure drops. Here is General Electric's take on Micro-LNG plants.