If you want to look for some of the worst vehicular polluters, look no further than the ships that carry cargo on the oceans and waterways. Just a few years ago, many older ships burned thick bunker fuel, an almost tar-like, bottom-of-the-barrel oil that was once cheap. As dense in hydrocarbons as it is thick in energy, bunker fuel created the black smoke that we see coming from the smokestacks of ships.

Oil companies long ago learned how to crack the long-chain hydrocarbons in bunker to create lighter fuels, like diesel and gasoline. Bunker fuel started to fall out of favor as the plastics industry took off in the 1960s; the complex hydrocarbons that made bunker fuel such a dirty but hot fuel to burn are the building blocks for many plastics.

In the past decade, many ships have converted to burning diesel. Ships that use boilers to produce steam and ships that use long stroke, two-cycle diesel engines typically burned high sulfur diesel and bunker (typically 35,000 ppm) until the MARPOL agreement kicked in, mandating the use of low sulfur diesel, also known as LSD (under 1,000 ppm).

MARPOL (short for Marine Pollution) is the International Convention for the Prevention of Pollution From Ships, a global agreement seeking to reduce ocean pollution created by ships and the shipping industries. Designed to minimize pollution of the seas, including dumping, oil and exhaust pollution, MARPOL applies to all ships flagged under countries that are signatories to MARPOL. These ships are subject to its requirements, regardless of where they sail. 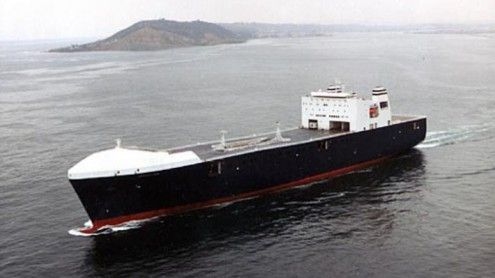 LNG as a shipping fuel started to gain some legs in 2012, as a number of shipping lines and cargo carriers looked for alternatives to the rapidly increasing costs of petroleum-based fuel. Under MARPOL, ships had to convert to low-sulfur diesel. As the EPA-enforced regulations started to kick in, US-based shipping companies, like US-Flagged TOTEM, applied for waivers to exempt them from the new regulations, with the promise that they would convert their ships to running on LNG.

Under these waivers, shipping lines like TOTEM can continue to burn traditional bunker fuel in place of low-sulfur diesel. Helping establish long-term supplies of LNG for use by other sectors of the transportation industry in the Puget Sound region was one of the purported reasons for the waiver. The idea is that investors will see this major demand, helping break supply barriers that constrain the growth of LNG in the transportation industries.

TOTEM provides a majority of the freight carriage via water from Seattle to Alaska, a valuable Jones Act trade route. While some freight can move over land from the US to Alaska via Canada, the water route is the preferred method. The new LSD regulations took effect on August 1, 2012, even as Alaskan lawmakers worked hard to get the regulation blocked, arguing that the regulations increase shipping costs to Alaska by as much as 8 percent, harming Alaskans and the state’s tourism sector.

TOTEM was not the only US-flagged carrier looking at LNG-powered ships. Jones Act competitor Crowley ordered two of the first LNG-powered, combination container and Roll-On/Roll-Off ships in the world. The 2,400-TEU ConRo ships, VT Halter Marine of Pascagoula, will carry containers, ranging from TEU to 53-foot by 102-inch-wide high-capacity units, with room for up to 300 refrigerated containers, and carry vehicle transportation via completely enclosed, ventilated and weather-tight decks big enough to accommodate nearly 400 cars and larger vehicles. Scheduled for delivery in the second and fourth quarter 2017, and using LNG as a primary fuel, the vessels will offer a 38 percent reduction in CO2 emissions per container.

Crowley plans to operate the two new ships to serve the Puerto Rico trade, replacing aged Ro-Ro barges pulled by diesel power tug boats. Over 20 years old, Crowley’s Ro-Ro barges are nearing the end of their lives, as are the massive seagoing tugboats that pull them, so it makes sense to replace these vessels with new LNG-powered ships.

Crowley is not the only player in the Puerto Rico trade with plans to deploy LNG- powered ships. Sea Star Line LLC, a cargo ship operator owned by Tote Inc., announced plans to put two LNG-powered container ships into service between Florida and Puerto Rico starting in late 2015.

"We operate within [the 200-mile coastal zone], and in order to comply, the most logical thing to do would be to move to LNG for our cargo ships," said Sea Star Line chief Peter Keller. "Environmentally it's the best way to go." 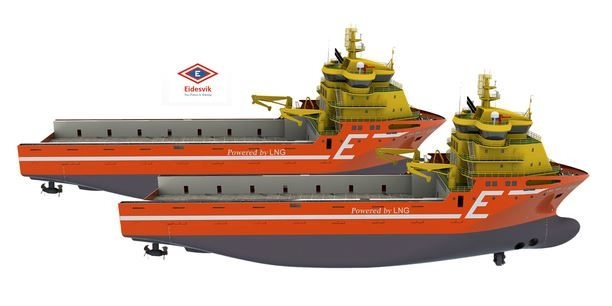 Out in the Gulf of Mexico, supply boat operator Harvey Gulf International Marine has ordered six new boats with duel fuel LNG-Diesel engines. Hauling drill pipe and other materials to offshore oil and gas rigs in the Gulf, Harvey expects the 50 percent fuel cost savings will offset the $58 million cost of each of the ships. With an expected life of 25 years, the company expects the cost savings to attract long-term contracts at competitive rates that deliver better profits.

Powered by long-stroke compression ignition two-cycle diesels, the ships can also burn ultra-low sulfur diesel if they run short of LNG. The market for dual-fuel, large bore, long-stroke marine engines is heating up, with Caterpillar, General Electric, Rolls-Royce, and Finland's Wartsila Oyj (which is supplying the engines for Harvey Gulf) stepping up development of natural gas-fueled engines and conversion kits for the marine industry to meet coming environmental standards.

While most of the engine makers are focused on dual-fuel compression engines that burn some diesel with every stroke, Rolls-Royce holds the record of powering the world's first pure gas-powered cargo vessel. Entering service for NSK shipping during 2012, the MS Høydal is a purpose ship, built to replenish the salmon and trout farms of Northern Norway, powered by a single Bergen six-cylinder gas engine rated at 1,620kW that is linked to other Rolls-Royce systems for optimum energy efficiency. With routine engine maintenance limited to changing spark plugs and filters, Rolls-Royce claims these vessels will provide maintenance cost savings of 5 to 10 percent annually.

The maritime industry is one of the largest commercial consumers of fuel in the US. Sales of diesel fuel for marine vessels reached 2.1 billion gallons and sales of marine oil reached 4.5 billion gallons in 2011, the latest year available from the US. Energy Information Administration.

Ship builders and operators never considered LNG a serious option to fuel ocean vessels in the past, due to a nearly non-existent supply chain and a lack of sufficient studies for supply, bunkering, and ship design. However, over 40 successful LNG projects led to new solutions. That research brought about a new ISO standard, clearing the way for worldwide adoption of LNG as a ship fuel.

With plans to build a large fleet of supply vessels for the Gulf Reason, it makes sense that Harvey Gulf announced its intentions in June 2013 to build and operate the first LNG marine fueling facility in the US at Port Fourchon, Louisiana, supporting an initial fleet of six vessels.

Harvey Gulf spent $400 million to build, own, and operate LNG-powered offshore support vessels, as well as two LNG fueling docks, each with 270,000 gallons of LNG storage and the capacity to transfer 500 gallons of fuel a minute, and the capability to fuel land vehicles that operate on LNG.

The Gulf is not the only US waters where LNG will appear, as Interlake Steamship Co., a major bulk carrier on the Great Lakes, has struck a deal with Shell Petroleum to supply LNG so Interlake could convert its vessels' engines to run dual fuel. Under the deal, Shell becomes Interlake’s exclusive supplier of LNG.

Shell is very active in the development of the LNG infrastructure for North America. It plans to implement a liquefaction unit at its Sarnia Manufacturing Centre in Ontario, Canada to supply LNG throughout the Great Lakes and the St. Lawrence Seaway. Shell also plans to install two smaller-scale transportation LNG plants in Geismar, Louisiana for marine fuels, and another in Alberta for on-road and high-horsepower applications.

Here is a video animation of the bulk ship MS Høydal, purpose-built to replenish the salmon and trout farms of Northern Norway.

This video shows the Bunkering activity of an LNG cargo ship in Norway – filling up the ship’s LNG tanks.