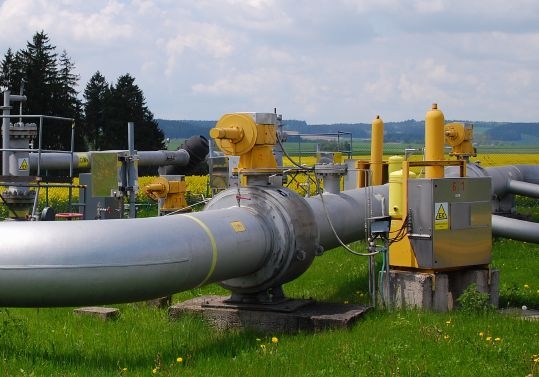 Natural gas pipelines are like highways — they tend to flow to population centers.

A federal regulator, the Federal Energy Regulatory Commission (FERC) governs the rates and tariffs the operators can charge to move the gas. FERC also issues permits for the construction and operation of interstate pipelines, holding hearings to solicit public comment, and ensuring that the pipeline operator completes all the required steps to obtain permits to operate. 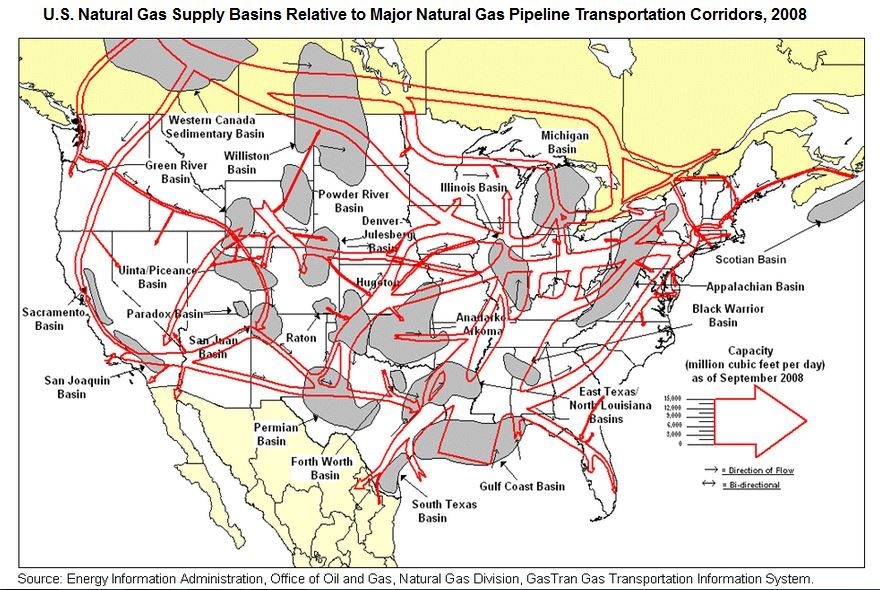 The flow of natural gas across the US follows some of the same surface-traffic routes as major highways and railroads, moving from the points of supply to the points of consumption.

Natural gas is measured in millions of cubic feet (at natural pressure).  Looking at the map above, the full width of the arrow represents 15 trillion cubic feet of gas per day of flow.  If we follow the flow out of the Gulf Coast Basin, that 15 trillion cubic feet of flow quickly splits and flows in a number of directions, moving gas to population centers in Florida, up the mid-Atlantic, and then up along the western slopes of the Appalachians to Ohio.  This is not a single pipeline, this is over 50 pipeline systems moving gas through multiple 20” – 42” diameter pipes.  No single company planned this network; it grew through the competition of private enterprise, private investment, and market demands. 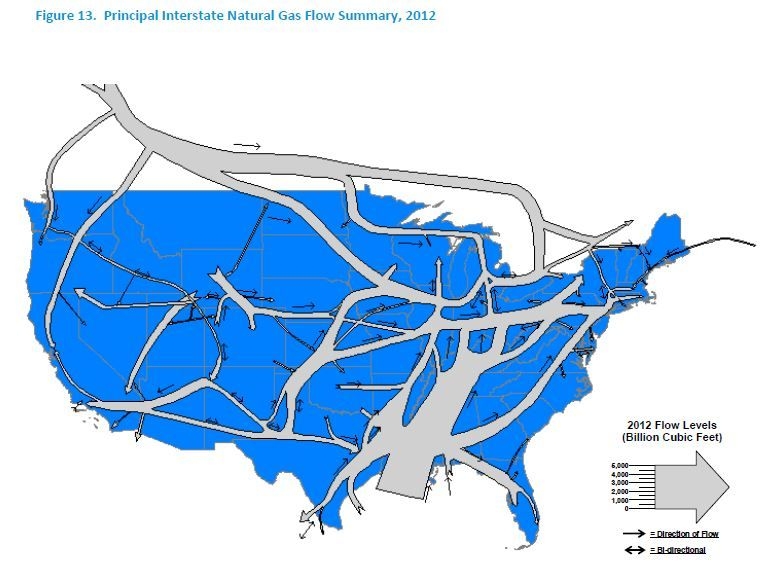 A natural gas transmission system must be capable of meeting the peak demand of its shippers, who have contracts for firm service on the line. To meet this requirement, the natural gas transmission industry built a combination of transmission pipelines to bring the gas to market areas. Individual companies built many of the gas pipelines in the national network in the post-war years of the 1950s – 1970s. There was no national master plan, no grand design of the network. The assets of one network competed against the assets of another network, as much as the FERC, its predecessors, and the states allowed the industry to build.

While there are many different pipeline companies, many of the companies are sisters, owned by the same larger companies. These larger companies are often Master Limited Partnerships (MLPs), companies that sell shares of the partnership on the stock market, using the funds to purchase more of the independent pipeline companies to build integrated transmission networks of pipelines, connections, underground natural gas storage sites, and liquefied natural gas (LNG) peaking facilities. The MLPs own the operating companies, sometimes integrating the operations, sometimes not.

Several key factors influence the design decisions that affect natural gas transmission pipelines. Demand for gas changes with shifts in the population, and with changes in industrial use. Production locations, and the relative cost of the gas, are determined by the capacity of the systems. Natural gas is a fungible commodity; there is really no chemical difference between gas from Louisiana and gas from Pennsylvania. The difference is the price of the gas, determined by agreement between the buyer and the seller in the commodity markets, and the availability of transmission capacity and the cost of production.

Pipelines and integrated storage sites balance efficiency and economy of delivery, employing techniques influenced by the operational requirements facing the company, the volume of demand, the types of customers, and available access to supply.

There are three basic pipeline systems:

For pipeline mileage records, the US Department of Transportation’s (DOT) Pipeline and Hazardous Materials Safety Administration (PHMSA) groups Gathering and Transmission Systems into the same group. Of the 2,438,475 miles of gas pipeline in the US, only 324,832 miles are pipeline systems configured principally for the long distance transmission of natural gas from production regions to market areas, only 13 percent of the total network. These long distance systems are trunklines — as in, the trunk of the tree.

The rest of the network is made up of Distribution Systems under cities, towns, and neighborhoods. These grid systems generally operate in and serve major market areas, receiving their supplies of natural gas from the major trunklines or directly from local production areas. The grid systems transport natural gas to local distribution companies and large-volume consumers.

Demand, Supply, and the Need for Storage

Demand is never steady. Natural gas is a heating fuel, so demand changes with the seasons. Natural gas is a feedstock for the plastics and chemical industries, but not as much as the liquids and compounds extracted from the gas prior to long distance transport. In the past decade, natural gas has become the fuel of choice for peak load electrical generation, and increasingly the primary fuel for power plants. Now, transportation companies are examining how they can use natural gas as a motor fuel. Each form of consumption has variable cycles that may help to smooth out the peaks and valleys of demand, but peaks and valleys will always exist.

Production is much steadier than demand. Once a well is ready for production, it produces gas. But it does not produce the same quantity of gas throughout its life. All hydrocarbon wells follow the same lifecycle as the chart below, swiftly declining in production in the first few years until production hits 20 percent of where it started, where the curve flattens out over the long-term life of the well. 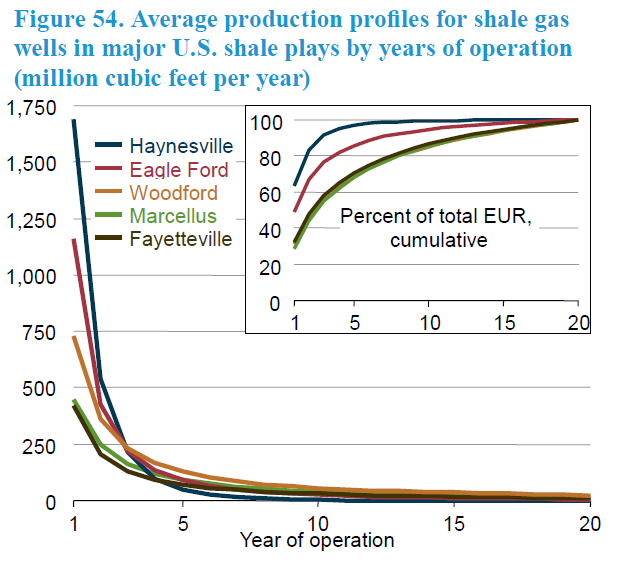 The curve is predictable, so the gas-producing companies continue to drill wells to tap more gas. Gas producers try not to drill if demand is insufficient to support the production, but they must stay ahead of long-term demand because it takes several months to bring a well into production.

Short-term spikes in demand — created by heating loads, and more recently, power generation — make it necessary to store gas. We are looking at daily and weekly changes in demand, not annual changes in demand. At times of greater consumption, draw demand is much greater than the supply out of the wells. In any business, operating a 100% just-in-time supply chain is both expensive and risky. The system, made of so many different entities and components, is not nimble enough to operate without an extensive network of buffers.

These are no small construction projects, as the following video illustrates. Here is a amateur video of a drive around the construction of a large addition to the Columbia Gas Transmission compression station and underground gas storage field in Majorsville, PA and Dallas, WV. MarkWest Energy Partners and Columbia Gas Transmission (a subsidiary of NiSource) share this joint development project. The Majorsville gathering and gas processing facility serves the northern panhandle of West Virginia and western Pennsylvania.

Natural gas as it comes from the ground is never ready for use.  In the fields of Pennsylvania and West Virginia, the natural gas from the well is rich in natural gas liquids, far more valuable as feedstock for plastics and other petrochemical needs.  The next video about a new processing plant in West Virginia illustrates this point.