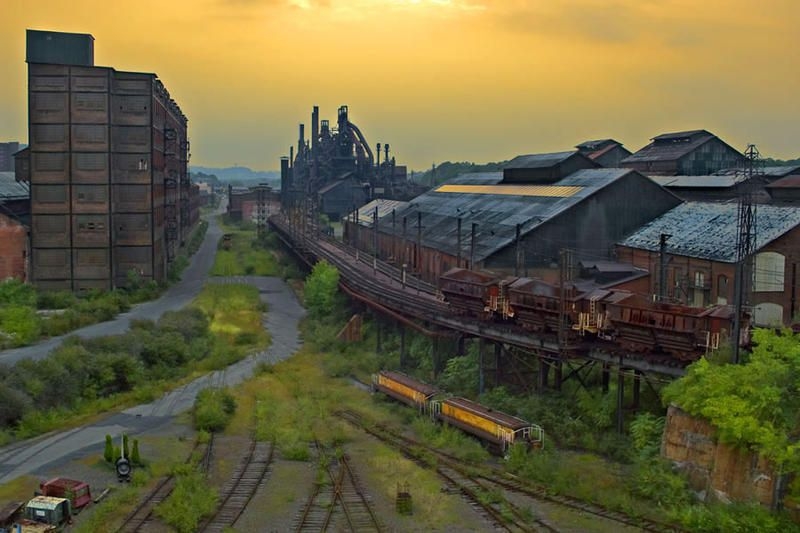 Large-scale industrial operations always carry such a risk. In the past decade, through the painful process of bankruptcy reorganization, General Motors and Chrysler shuttered manufacturing facilities that had outlived their useful lives. The operations no longer fit the business conditions. Not long after closing, many of these plants were demolished, the buildings unfit for other applications.

Many of the massive, dedicated industrial operations of the last century are falling under the wrecking ball. Many steel mills, power plants, and oil refineries disappeared in the past decade as they reached the end of their useful lives. The Rust Belt around the Great Lakes region of the US highlights what happens to a strategy when business conditions change. It also highlights changes in transportation, the availability of energy, raw materials, and labor costs.

Eighteenth-century iron works, like the Hopewell Furnace in eastern Pennsylvania, were located close to the raw materials. Located within miles of surface deposits of iron ore, furnaces like Hopewell used local trees as fuel, and streams for water. Transportation of finished iron pieces took effort, but far less effort than the transport of the iron ore.

Advances in transportation altered the strategy of location. By the middle of the 19th century, canals, river barges, and railways started to simplify the movement of bulk raw materials, allowing for iron works to move closer to consumption. American steel great, Bethlehem Steel, was located on the shores of the Lehigh River for easy barge and railway access to coal and iron ore-rich Carbon County, Pennsylvania. To the west, Pittsburgh became the Steel City because of the flow of ore and coal along the Monongalia and Allegheny rivers. 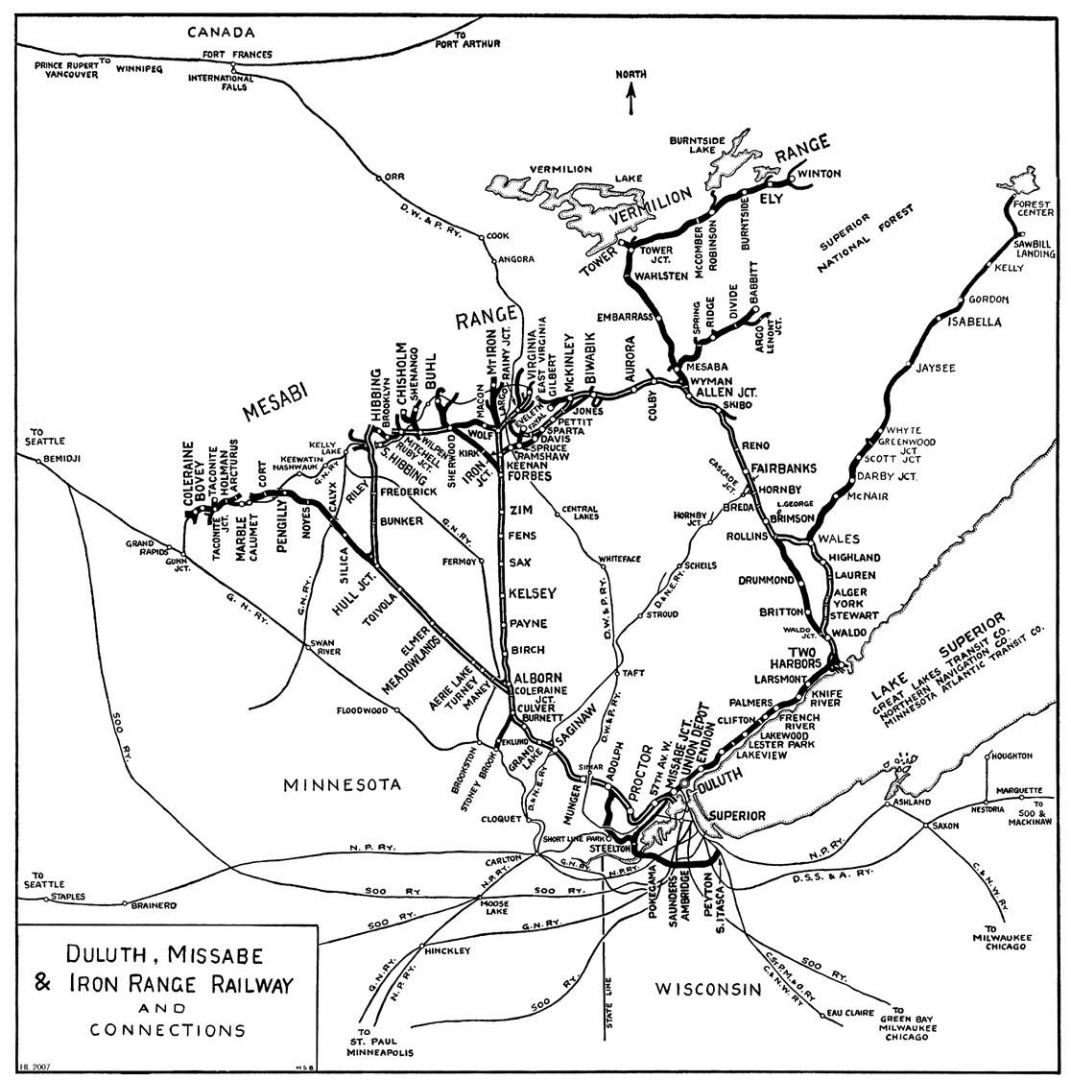 Why did the steel companies locate the massive mills of the early 20th century around the Great Lakes? Access to raw materials and water. Iron ore and taconite flowed from mines in the Missabe Range in Minnesota by the rails of the Duluth, Missabe & Iron Range Railway to the Lake Superior port of Duluth. In Duluth, Great Lake ore ships carried the ore to the hungry steel plants along the shores of Lakes Michigan, Erie, and Ontario.

Each advance in transportation brought another opportunity to move production farther from the raw material and closer to the points of consumption. Steel production is just one example of the decoupling. Advances in the bulk transport of commodities — like oil in pipelines and ships, grain in railroad hoppers, and lumber on trains and barges — supported the migration of manufacturing from the remote locations of raw materials to urban centers.

Some industries remain close to the source of their raw material. The presence of undersea oil is the reason for the concentration of oil refineries along the Gulf Coast of Texas and Louisiana. Regulation also plays a part because of the cost burdens a new refinery faces in order to comply with modern environmental impact requirements. The anti-oil culture contributes to the trend, a combination of NIMBY (Not In My Back Yard) and climate-change concerns. Oil pipelines lead to and from this area, where the bulk of US-based refining capacity is located.

Getting oil to the existing refining locations continues to be a challenge. Transportation is not the only challenge; there is also world supply and demand to consider. Just in the past few years, large oil companies have shuttered refineries or exited the refining business after massive financial loss, all due to the high cost of global oil. Refineries along the East Coast, caught in a logistical island that limits the access to lower cost feedstock, have closed, sold, restarted, or been repurposed into facilities that handle other products.

Big oil is not the only industry that places production close to the source. Across the country, coal mines and electrical power plants operate in symbiotic relationships. About 80 employees work the oldest operating surface coal mine in the United States, the Wyodak Mine east of Gillette, Wyoming. This mine pumps about 7 million tons of fuel annually to a group of power plants less than five miles to the south. Those plants create electricity that flows through the Western Grid to Denver, Colorado; Boise, Idaho; and Portland, Oregon. 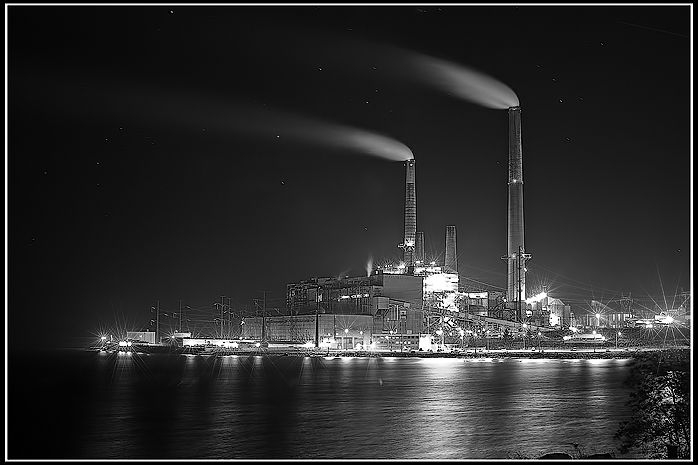 If you think that these combination plants exist just in the wide-open spaces of the western US, think again. Dominion Power’s 1,600 Mw Mount Storm Power Station in Grant County, West Virginia burns synfuel, created from the coal dug out of the underground mines that surround the power station. As with several of the other symbiotic power stations, the mines work to feed a continuous stream of coal into the synfuel process, providing an uninterrupted flow of fuel to support electricity generation.

A Prelude to Offshore LNG Production

Over 448 meters long, the Shell Prelude FLNG (Floating Liquefied Natural Gas Facility) is the largest floating vessel in the world. Built as a joint venture with Japan’s INPEX Corporation, the Korea Gas Corporation, and the Overseas Private Investment Corporation, the Shell-operated Prelude will produce about 3.6 million tons of LNG per year.

The Prelude's 268,000-ton hull launched in December 2013 and continued through fitout and the installation of the liquefaction plant. Fully built, the Prelude will weigh over 600,000 tons, more than five times the weight of the largest aircraft carrier. Technip Samsung built the hull in the Geoje shipyard in South Korea, with construction starting in October 2012. The completed vessel will cost $12.6 billion when complete, and it will go online in 2017.

Designed to withstand Category 5 cyclones, the Prelude system will produce 110,000 BOE (Barrels oil equivalents) every day from gas produced in the Prelude and Concerto gas fields 200 kilometers off the coast of Australia. With a planned life of 25 years, the floating LNG facility eliminates long undersea pipelines to carry the well gas to a land-based LNG operation. The Prelude will offload LNG directly to LNG tankers to supply the hungry gas appetites of Japan, Korea, and other Asian countries.

Onshore LNG liquefaction plants are huge investments and huge facilities.  The Cheniere Sabine Pass LNG terminal, a combination receiving and liquefaction plant, sits on 1,000 acres of land in Louisiana.  With Prelude, Shell is attempting to compact what would sit on over 90 acres into a single hull.  When finished, Prelude will tower 30 stories over the waterline.

Work continued into 2016, highlighting the amount of work needed to build the  massive floating LNG plant.  Think about it - it took only 16 months to build the hull, but over five years to build the plant that goes inside the hull.

While work continued on the floating part of the project, the undersea work at the site where Prelude will spend 25 years of operations, comes together.