Short-term spikes in demand are not the only reason for gas storage. The pipeline systems need time for maintenance and repair, and to make connections to new lines. Storage reservoirs provide supply to the distribution systems while the transmission systems are impaired. The networks simply are not nimble enough to operate without an extensive network of buffers. So storage is a key design element that pipeline operators and distribution companies include in their gas transmission networks.

As a gas, methane wants to be free. The challenge in storing gas lies in building an enclosure that is large enough to hold enough gas to matter. Above ground, storage is expensive and limited in capacity. At the local level, gas distribution companies operate gasholders (also called gasometers) to hold gas for balancing the distribution systems. Gasholders are like metal balloons, expanding tanks that hold the gas at near atmospheric pressure to meet immediate peak needs. These expanding towers hold a limited supply of gas, however, providing just enough gas for the hourly changes in demand.

Gasholders, while still in use in Europe, are gone from the landscape here in the US. A landmark in any aerial photos of South Boston from the 1960s and 1970s was the large gasholder off of Albany street (shown in the photo below), just west of the Southeast Expressway (I-93). 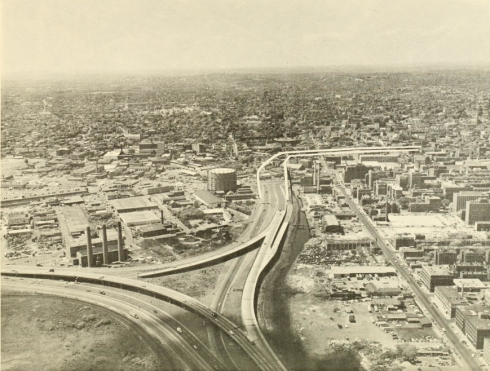 Gasholder towers appear in old cityscape photos of just about every major American city from the 1910s to the 1960s (like the photo below of the gasholders in East Los Angeles in the 1920s). The holders first appeared near the town gas works, holding the town gas produced by the coke works. As pipeline systems developed after WWII, the town gas works disappeared, along with the gasholders. 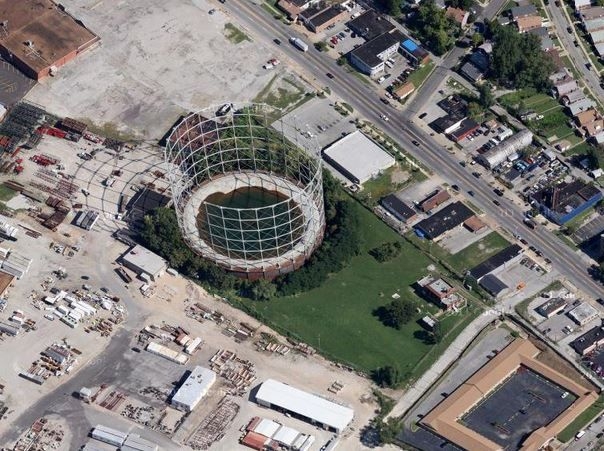 Larger gasholders, mainly in older Eastern cities, continued to provide distribution buffers up to the end of the 20th century. The Laclede Gas Light Company in St. Louis was one of the last active US gas distribution companies that continued to use gasholders. By the early years of the 21st century, Laclede converted to underground and linepacking for balance storage, retiring and then demolishing the gasholders.

As of this writing, two gasholders remain standing in the US — one in south Boston, now converted into a hotel, and the other in northwest St. Louis. One of the last gasholders on the East Coast — in Baltimore — fell in February 2013, as the video below shows.

One of the methods used to replace gasholders is linepacking. The pipeline itself can be a storage system. Consider that a 50-mile section of 42-inch transmission line operating at about 1,000 pounds of pressure contains about 200 million cubic feet of gas. That is enough gas to power a kitchen range for more than 2,000 years. The amount of gas in the pipe is called the "linepack."

By raising and lowering the pressure on any pipeline segment, a pipeline company can use the segment to store gas during periods when there is less demand at the end of the pipeline. Using the linepack, pipeline operators handle hourly fluctuations in demand very efficiently. 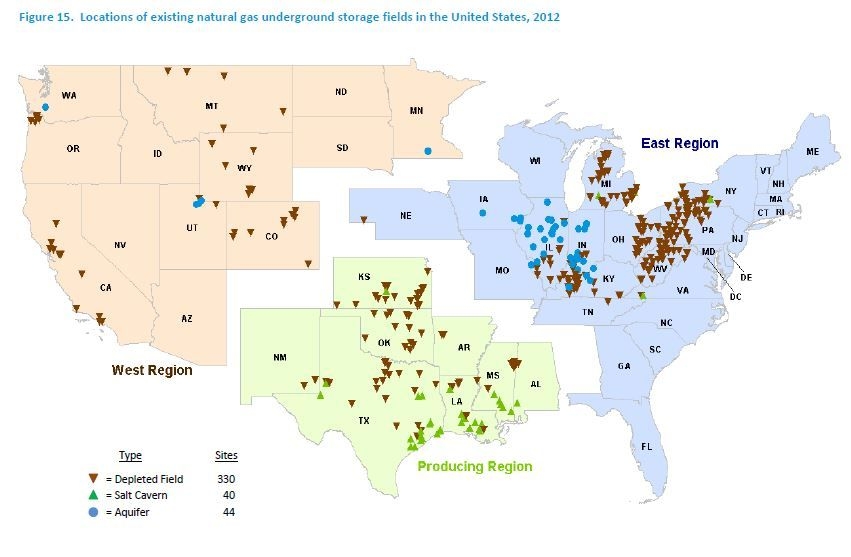 Natural gas does not move through pipelines quickly; the average speed is about 15 MPH with the newest and fastest pipelines able to push high-pressure gas at close to 30 MPH. The network of storage concentrates the storage sites close to the consumption points, so the gas travels shorter distances faster in order to reach the distribution networks. The eastern region of the US shows the highest concentration of storage sites, dominated by depleted gas field storage. Salt cavern storage is a newer technology, primarily located in the producing region of the Gulf Coast States, providing production balancing and high-cycle storage of gas fresh from production that is waiting for pipeline capacity. 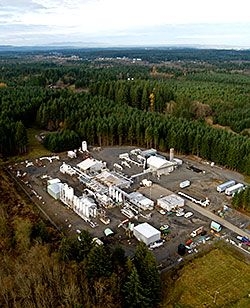 Natural gas picks up moisture and other impurities when stored underground. The methane may react with the salts in the caverns, or it may mix with the natural gas liquids that remain in the old gas wells. The storage facility must have dryers, separators, and filters to process the gas as it moves from storage back into the pipelines. If left in the gas, these impurities will corrode the pipelines, increasing the risk of explosive pipeline failure. All these storage methods require varying levels of investment in equipment.

In order to maintain working pressures in any storage reservoirs, the reservoir must maintain a cushion of natural gas. This cushion can never leave the well, so it is a cost of starting an underground storage facility. Different types of storage require different cushions.

Depleted gas fields are the largest form of storage in both number of sites and capacity. The pipelines already travel to the wells, and with the installation of compressors and monitoring equipment, old conventional gas wells become storage locations for natural gas under pressure. The depleted reservoirs are attractive because their geological and physical characteristics are usually well known, so depleted reservoirs are generally the cheapest and easiest of the three types of underground storage to develop, operate, and maintain.

Depleted wells require a cushion of about 50 percent of the natural gas. Since depleted reservoirs already hold a cushion of natural gas and hydrocarbons, they don’t require more gas, lowering the initial startup cost of the storage facility. Typically, these facilities operate a single annual cycle, injecting gas in the off-peak summer months and withdrawing in the winter. 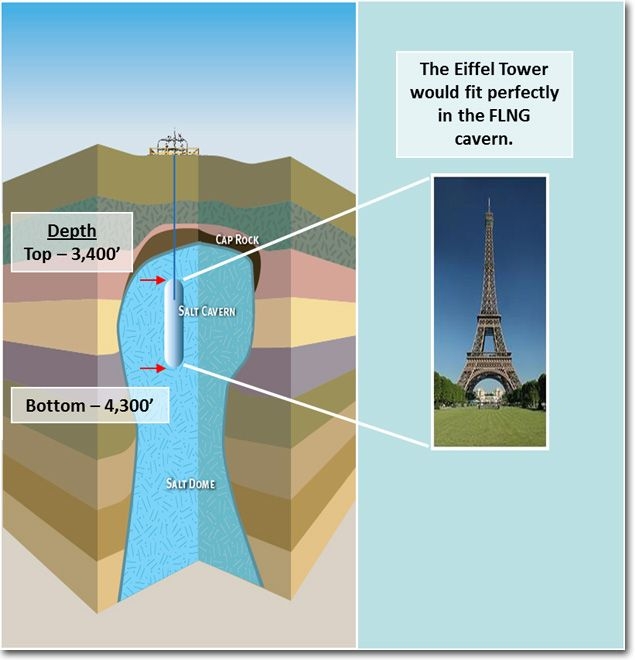 Salt caverns are the second form of underground storage. Operators drill into the rock salt layers and carve out caverns using the solution mining process, pumping fresh water down the borehole into the salt. This dissolves the salt, leaving a void. Pumping the saline back to the surface, the process continues until the cavern is the desired size. Once created, the salt cavern becomes an underground natural gas storage vessel with high deliverability. Once the cavern is completed, operators install compressors, filters and liquid separators, control and monitoring equipment, and the pipeline that connects the cavern to the trunk lines.

Cushion gas requirements are low, typically about 33 percent of total gas capacity. Salt caverns are naturally dryer than other forms of storage, and will not contain the same contaminates found in the other two methods of storage. Salt caverns are smaller than depleted gas reservoir and aquifer storage facilities, sometimes only one one-hundredth of the area of a depleted gas reservoir facility, so salt caverns cannot hold the large volumes of gas necessary to meet base load-storage requirements. Salt caverns allow gas to be replenished and withdrawn much faster, with less waste and less processing effort. Because of the lower cushion requirements and quick cycle-time, salt caverns are effective in emergencies or during short periods of unexpected demand surge.

The investment costs for aquifer storage is high. Because of the unknown geological and physical characteristics of aquifer formation, significant investment is required to investigate and evaluate the aquifer’s suitability for gas storage. All infrastructure must be developed from scratch, including drilling wells, extraction equipment, pipelines, dehydration facilities, and compression equipment. Since the aquifer contains water and no naturally occurring gas, aquifer storage typically requires significantly more cushion gas than depleted reservoirs — up to 80 percent of the total gas volume. Most aquifer storage facilities in the US are old installations, developed at a time of very low natural gas prices.

In October 2015, residents in the Proter Ranch community outside of Los Angeles started to small something rotten in the air.  Complaints continued, focusing on a single family home, which inspections proved was not the cause of the gas leak. Workers at the SoCalGas Aliso Canyon storage site discovered a blowout of one of the storage wells on October 23, 2015 while executing a twice-a-day inspection of the storage wells.  Until SoCalGas sucessfully sealed the leak on Feburary 18, 2016, the massive gas leak  spewed more than 100,000 metric tons of methane into the air, sickening area residents and prompting the temporary relocation of 8,300 households and two schools.

The second largest underground of its kind in the US, the former oil field became an example for envionmental groups.  Discovered in 1938 by J Paul Getty's Tidewater Associated Oil Company, the massive field produced oil and natural gas until the early 1970s.  Getty sold the fields to the Pacific Lighting Company, (SoCalGas predecessor) which converted the 115 wells into an 86 billion cubic foot storage facility.  Pacific Lighting used the normal methods of the day of cementing the well head, but not the well casings down the entire length of the well bore.  Current methods seal the well casings and hardware to the surrounding rock formation, including their often more than one mile of steel casing to prevent water intrusion into the well and to hold the rock formation tight to the well casings.

SoCalGas has been busy working on an inspection and rehabilitation of the remaining 114 wells in the Aliso field.  As of June 2017, they reported 100% of the wells inspected, and work proceeding to cement the wells and stop leaks. 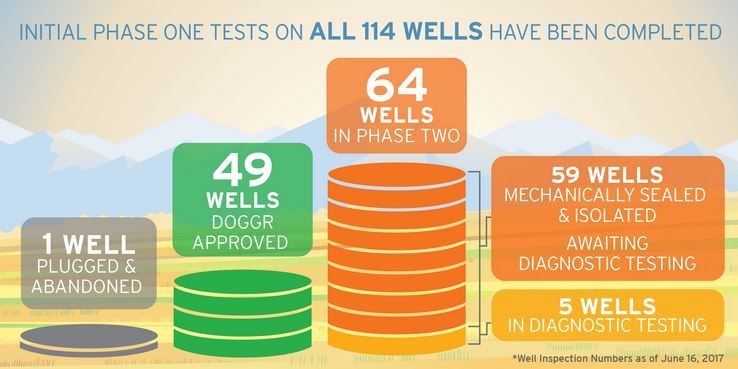 The video below is an infrared aeral image of the gas leak from December 2016.

The Envrionment Defense Fund (EDF) made the video available as part of ongoing efforts to close the facility.  The California state senate attempted to pad a bill that would close the facility.  Meanwhile, new injections of gas are on hold while SoCalGas is working to inspect and rehabilitate the field.  Considering the size of the storage facility and the lack of other facilities in Southern California, closing Aliso Canyon does not appear to be a viable option, considering the consumption of natural gas in the area for electrical power generation.

Underground natural gas storage is not just a North American operation. Large EU based gas producers and distributors like Energie and Gazprom are operators of both new and developing gas storage operations, as the videos below highlight.