My Great Uncle John was a geologist. He spent most of his life looking at rocks in search of oil and gas. In John's day, oil and gas exploration looked nothing like it does today. There were no computer models, no seismographic shaker trucks, no 3D color spectral modeling or data analysis. What John did was go out in the field with a drilling crew, punch a hole in the ground, and look at the samples of stone that they would pull up from the crust of the earth. 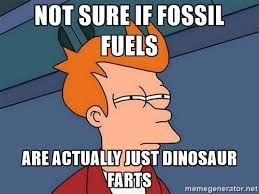 Uncle John and his colleagues studied the stone samples in search of what he called Dinosaur Slime (oil) and Dinosaur Farts (gas). By the time I got to know John, he'd already retired from the field. But that didn't erase his knowledge, or his connections to people still in the industry. One night in 1985, sitting around the campfire on a camping trip in Colorado, John pointed to the shadows to the south. He said that he knew that there were a lot of dinosaur farts trapped underneath the mountains to the south of us. He said that the geologists even knew what they had to do to get the gas out of the ground. He described how the gas was trapped in tiny little pockets within the layers of shale. What the energy companies had to figure out was how to break that shale to release the gas. They also had to figure out how to get to all the little pockets where the gas was hidden.

Fast-forward two decades. We now have horizontal drilling and hydraulic fracturing, the two necessary technologies that allow the energy industry to reach for those tiny pockets of gas and oil that John described on that camping trip. Horizontal drilling allows one well hole to reach a wide area. Hydraulic fracturing allows the drillers to pulverize the rock in place, releasing the gas and oil. The fossil fuel Renaissance in the United States is a result of these two technologies. Our geologists knew for decades that these hydrocarbons hid inside shale rock. Now we can get at them.

My great uncle had an interesting sense of humor; his use of the phrase dinosaur farts is just one example. Natural gas is actually a hydrocarbon gas mixture, mostly methane, the product of buried plants and animals exposed to thousands of years of heat and pressure. As it comes out of the ground, natural gas can't be used immediately. While it is mostly methane, there are other compounds:  ethane, propane, butanes, pentanes, mercury, heavy hydrocarbons, hydrogen sulfide, carbon dioxide, water vapor, helium, and nitrogen.

Natural gas is found deep in underground rock formations, in association with other hydrocarbon reservoirs like oil, and captured in coal beds. It is the product of two different mechanisms, biogenic and thermogenic. Poke a hole into any modern landfill and you will find methane emerging as a biogas. Poke a hole deep into the ground and you may find natural gas created through thermogenic processes; the same processes that create oil, coal, and diamonds. Fossil fuels are all compound carbon chains. Energy from the sun captured by ancient plants and animals converted under high temperature and pressure into stored energy, energy released through oxidation, burning.

Man has used natural gas for a long time, dating back to 500 BC when the Chinese used bamboo pipelines to capture gas that seeped from the ground. This gas was used to boil seawater. Modern extraction didn't happen until the early 19th century. According to the best estimates there are over 850 trillion cubic meters of recoverable natural gas. We've only used about 66 trillion meters — 8% of the economically recoverable reserves.

So we have a lot of gas to use. The problem is, how to use it.

Until the 19th century, wood was the fuel man burned. The population of the planet was smaller, and we had vast forests to cut down and burn in fire pits. As the population grew and man found more ways to use heat to improve life, the limitations of wood as an energy source became clear. Wood is heavy. It takes time for trees to grow. A wood fire creates only so much heat. Burning wood releases an airborne chemical stew that contaminates the environment.

There are historical examples before the 19th century of other fuels being used. However, it wasn't until the 19th century, after the Age of Enlightenment and scientific discovery, with the population of Europe growing, that man started to look for more useful fuels to create light and heat. We burned various oils and fats collected from animals and vegetables. Before the commercialization of petroleum oil, the primary source of lamp oil was fat extracted from whales. If man had not figured out how to use petroleum oil, we probably would not have any whales left in the ocean today.

In the 19th century, natural gas was an unwanted byproduct of oil production. Natural gas effervesced from the crude oil as it came up out of the ground, in a manner similar to what happens when you open a can of soda. There was no market for natural gas, so it was a valueless nuisance in early oil production. Even into the early 20th century, drillers often burned off the natural gas at the oil well, mainly to keep it from exploding and setting the oil itself on fire. Today drillers capture localized stranded gas and return it to the reservoir through injection wells, partly to facilitate the extraction of oil, and partly to store it for potential future use.

A Fuel Must Know Its Limitations

The oil drillers of the 19th century burned off natural gas because there was no demand for it. A century later, there still is a greater demand for petroleum than there is for natural gas. Natural gas is more difficult to use and contains less energy than petroleum, which limits demand.

Diesel packs approximately 35.86MJ/l (megajoulies per liter) of energy while gasoline delivers 32.18MJ/l of energy. While it is hard to compare natural gas power per unit to petroleum because it is a gas and diesel is a liquid, it is not impossible. In a liquid state (liquefied natural gas – LNG), it takes about 1.7 gallons of LNG to equal the energy output of one gallon of diesel.

In the 19th century, man looked for easy-to-use energy sources. Coal was just one example of an easy-to-use solid fuel to replace wood. Coal was easy to dig from the ground, pile up, shovel into the backs of wagons, and haul to where it was needed. Easy to dump, easy to store, and easy to burn. Man applied technology to figure out how to cook coal into coke, a key ingredient in the making of higher-grade steel.

Petroleum was a little bit harder. You had to punch a hole in the ground and pump the oil up out of it. Because it was liquid, it could flow through troughs and pipes. This liquid was stored in barrels, which could be loaded into wagons and then hauled to refineries. Cooked off in simple distillation processes, the petroleum became fuel oil, kerosene, petroleum lamp oil, and paraffin wax. Distilled into fuel oil or refined into gasoline, liquid fuels are easy to transport and use.

Colorless and odorless natural gas was simply too hard to harness in the early 19th century. Natural gas required a fixed-pathway of pipes for transportation from source to consumption. Because it is colorless and odorless, it is dangerous. The natural gas used in towns and cities in the 19th century was not natural gas from the earth, but town gas made by the destructive distillation of coal. Most cities and large towns in the eastern United States in the late 19th and early 20th centuries had a gashouse, which cooked coal in airtight ovens to create coke. The gashouse distributed this flammable gaseous fuel through a network of pipes to residences and other buildings for cooking and lighting. Widespread use of gas for heating did not start until the last half of the 20th century.

The first examples of manufactured town gas appeared in England at the very beginning of the 19th century. As the technology increased in scale, other investors and entrepreneurs spread the business model from England to the United States. While initially competitive, the delivery infrastructure of pipes turned the business into a group of single-source monopolies, whether they were municipal utilities or private corporations. Lighting was the initial application for town gas. It wasn't until the second half of the 19th century that the industry diversified to provide gas for heat and cooking. This change was motivated by the invention of the light bulb, which threatened a gas industry focused only on lighting.

It wasn't until the end of the 19th century that natural gas pipelines started to appear, carrying gas from the Texas and Oklahoma oilfields to Chicago and other cities. This natural gas supplemented the manufactured fuel supply, eventually displacing it.

The video that follows, a 1920 silent movie, shows the operations of the Hunt’s Point plant of the Consolidated Gas Company of New York (Bronx). The movie shows that this was big industry.