In Part 1, we started to explore the difference between the two storage methods for natural gas as a fuel for truck operations. Which storage method is the right one depends on a number of factors, like the truck application, the fleet operations, range of service, and availability of fueling options.

Compressed Natural Gas (CNG) is great for light duty, medium duty and some heavy duty applications for which the fleet routes average less than 250 miles per day, the vehicles burn less than 40 gallons of diesel per day, and they return to the barn at the end of every working day. City buses and trash collection services fit this model. The operator can make the investment to install a complete fill system that automatically fills the trucks overnight. Waste collectors, like Waste Management & Republic Industries, deploy fleets of CNG trucks, using the complete fill method to keep their operations running.

Localized delivery fleets like UPS use the same methods, augmented with a fast-fill system to keep some vehicles on the road. As we illustrated previously, fast-fill generates heat in the filling process, losing about 20 percent of the vehicle's storage capacity. A fast-fill station requires a significant investment — around $5 million to build the station, and at least a half acre of land. Because of the need for both pressure and volume, fast-fill requires a natural gas supply of a minimum of 100 psig and several thousand cubic feet of gas per minute. The 2,500 HP electrical motors that drive the compressors of the fast-fill system consume 2MW of power when they run.

Getting Cold to Get Dense — Liquefied Natural Gas (LNG)

As we discussed earlier in this series, chilling natural gas to -260° F turns it into a liquid, the densest form of methane that man can create. Chilling natural gas to the point at which it becomes a liquid takes industrial strength effort, and a purpose-built operation requiring significant investment in money and land. That investment affects the distribution of LNG, and changes the model of an LNG fueling facility. 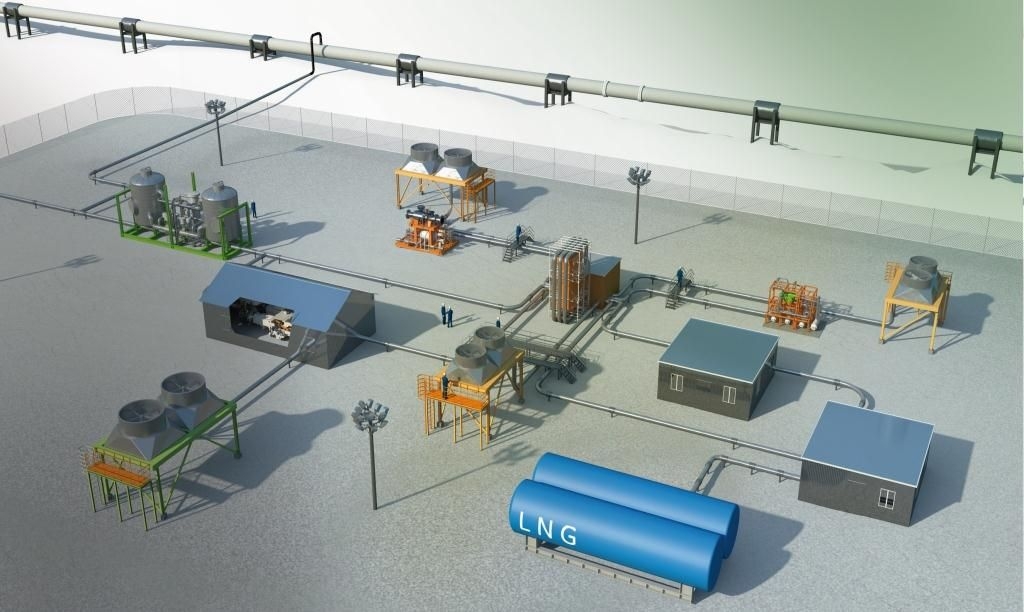 Liquefaction plants traditionally are very large investments. Until a few years ago, the typical LNG plant was a large, complex industrial operation. But several companies — including General Electric, Linde, Wartsila, Shell and others — are all developing or actively marketing mini-liquefaction plants that can create between 1,000 and 10,000 gallons of LNG per day. Until these plants come on line, delivery of LNG depends on manufacture of LNG at large facilities and truck transport to the filling station. In a few years, however, as micro-liquefaction systems become common, more production could happen at the filling station.

For now, the required infrastructure for an LNG filling station is no more complex than what is required for a diesel filling operation — storage tanks, dispensers, and the piping system to pump the liquid from the tank to the dispenser. Yes, the tanks are different, as are the piping and dispenser, but nowhere as complex as a CNG operation. With truck tanker delivery of LNG from the liquefaction plants, the investment cost to create an LNG refueling station can be lower than the cost of a CNG station.

Because of the higher per gallon energy density of LNG over CNG, LNG is the choice for fleets whose length of daily haul is greater than 250 miles and whose vehicles do not return to base every night. A 150-gallon LNG tank system is equivalent to a 75-gallon diesel tank system, providing 400 – 450 miles of range, which is enough fuel for a driver to complete a full day of duty service in a single fill. Doubled up with two 150-gallon systems, the LNG truck can support a long-haul team operation, with an effective range of 800 – 900 miles.

The companies involved in selling natural gas for over-the-road use quickly built  the fueling station infrastructure, and by the end of 2014, a trucker was able to find an LNG fueling station every 250 miles along each of the major interstate truck corridors. Between the announcements of existing and proposed LNG fuel stops by Clean Energy, Travel Centers of America, Petro, Loves, and the other truck-stop chains, competition for support of over-the-road LNG fleets will increase.

Considering the operation practice of supporting refueling in company terminals at the company-owned fuel islands of some of the larger national fleets, like Swift Transportation and Schneider National, the roll-out of the public access network may not be as critical if these fleets decide to invest in a fleet-level conversion.

LNG has an edge over CNG on the refill speed. In a closed-capture system, the typical LNG dispenser can fill 15 – 20 Diesel Gallon Equivalents (DGE) per minute, pumping 25 – 35 gallons of LNG per minute. While dispensing speed is on par with diesel refueling speeds, the driver must put on Personal Protective Equipment — gloves and face shield — when refueling. As we saw in the video in Part 1, there are a few more steps in the refueling process, depending on the condition of the truck's on-board tank and the amount of LNG still in the tank at time of refill. For the most part, however, the time needed to refuel an LNG-powered tractor is the same as the time required to refill a traditional diesel truck.

Taxes and Other Factors

Using LNG is not all cupcakes and butterflies. Two factors limit the benefits of LNG over CNG:  taxes and shelf life.

In most cases there is no road-use tax tied directly to the sale of CNG. Some states and localities may charge a sales tax on CNG as a fuel, but for the most part, fleets using CNG do not pay a federal or state road-use tax at the pump as trucks that use other fuels do. Not so with LNG, which is subject to the same federal and state taxes paid at the pump. Based on the DGE dispensed, LNG still provides a fuel-cost reduction in comparison to diesel, but not as sweet as CNG.

LNG is great as long as the fuel is used. But it does not stay liquid for long. Unlike CNG, which is simply compressed gas, LNG must remain cold in order to remain liquid. If the liquid is allowed to warm, it will return to a gaseous state. As a gas, if not used, it must be vented in order to prevent pressure from building up and rupturing the tank. Once vented to the atmosphere, the natural gas is lost. While the holding tanks at refilling stations may hold the liquid at cryogenic temperatures longer, the onboard tanks on the trucks can hold the liquid about five to seven days before the liquid gasifies and returns to the atmosphere.

So the rule of thumb is, as it is with diesel, to buy the storage you need; don’t buy too much onboard storage, considering the operational cost factors of your fleet operations.

To wrap up this part of the discussion, we leave you with the seven key factors to consider when choosing between LNG and CNG as an alternative fuel for trucks:

This video about LNG refueling is somewhat light, more of a PR piece about how fast a refill can be, but it demonstrates the process quickly.

The actual refill takes less than the 14 minutes it takes to watch this PG&E training video. However, the video is great for the Safety First movement.