While researching the staffing challenges of supply chain-related industries, I started to dig into data about women in the industry. A song I heard on the radio this morning called "Butterfly Driving a Truck," by Casper Babypants (he is really big with the three-to-nine-year-old age group, which is half the population in my family) inspired me to dig into that data.

First, I know that there are not that many female drivers. Some internet searches yielded me a lot of unsubstantiated data, and lots of partial data. One web site claimed that there are 200,000 female heavy-duty drivers, and that this number represents 5 percent of all drivers. If this were true, then there would be about four million truck drivers in this country. I turned to a more credible resource, the Bureau of Labor Statistics, for more information. BLS data is never exact, as it is based on survey data that is extrapolated to represent the total population. But it is the best data to go with because the survey is consistently administered and well documented.

According to BLS data there are 1,466,740 heavy duty truck drivers who work as employees for a company. This number does not include independent owner/operators. Another data table says approximately 3,000,000 truck drivers are in the labor pool. That same table shows that 4.6 percent of them are women, which results in about 140,000 female truck drivers.

Truck driving is not an easy occupation. Like aircraft pilots and flight attendants, truck drivers spend a considerable amount of time away from home. Some truck drivers consider this a lifestyle, not just employment. Not only do the drivers work a longer day than most of us, they do it away from home, and they practice their profession on a road full of amateurs in automobiles. As a career, it doesn't pay well. According to the BLS data, drivers make between $25,000 and $58,000 a year.

In the course of my research I came across an interesting set of videos on YouTube. @TruckerDesiree has a channel with over 50 posted videos. We do not endorse her sites, videos, or blogs, or the story that appears on the AskTheTrucker web site as a string of comments. What is interesting about her story is that she jumped into social media, using Twitter, YouTube, and other web sites as an outlet for her advice and as a place for her to grind an axe on the issues that women face as drivers in the trucking industry. It is an example of how people can get their story out in social media, and use social media as a vehicle for social change.

In Desiree's video that we share with you here, she gives an organized but unscripted overview of a new driver’s life on the road. Desiree did not have a grand experience with her training, and she revels quite a bit about personal challenges in her life on and off the road in her blogs. At times you can hear the sound of steel on the wheel as she grinds her axe. Still, she shares some really solid descriptions of what some new drivers live through, and what issues might keep women out of the driver's seat. She no longer drives, due to an injury incurred in a fall on a slippery driveway at a hotel that the company she drove for put her in. Desiree now runs a web and blog site www.realwomenintrucking.com, where she continues to press on the issues of women truckers.

Driver turnover is an ongoing issue in the industry. While Desiree mentions that drivers are the only ones advertising for their own replacements on the back of their office, the trucking companies must keep searching for drivers. Heavy-duty OTR drivers must be trained, and I know a few who made it through the process to get DAC'd in training. 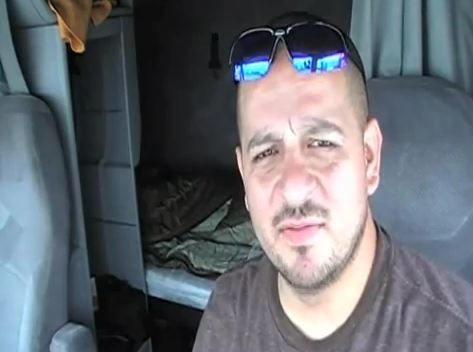 And the turnover issue got me looking at other new driver videos. Your Boy "E" is a new driver who pulled the trigger and went to CDL school in December 2010. He is now a solo driver for Swift Transportation. He taped his journey through the training process and then as a new driver. I found his habit of taping his story while driving his car a bit troubling, but he appears to have gotten real serious about his driving when he got behind the wheel of a rig. This guy is optimistic and devoid of cynicism. He provides some really good detail about how to do the paperwork and some of the other challenges of being on the road.

Everybody in this industry should listen to the drivers. While there are some nut-jobs, just as there are in any vocation, most drivers are thinking people who have embraced a job that alters what you can call "normal." The professional driver understands that anything that goes wrong while they are behind the wheel is their fault, and they feel that pressure all the time. They are much more than Steering Wheel Holders, as Desiree puts it. Heavy duty drivers live a life that most of us do not understand. And not many of us get exposed to it.

Here is a chance to see what two drivers have to say about life on the road and how the business looks from behind the wheel.

And here is a clip of Your Boy "E" and a video of his first filmed trip. He had some really great instructional videos about the actual effort he went through to get trained as a driver. Moreover, this video and the next part illustrate some of the additional grief that drivers experience during a typical day at the office.

Taking a Stand on HOS