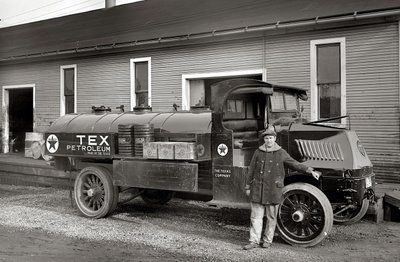 As the population grew and the economic engine powering the United States revved up, more cars and trucks began traveling on the nation's highways. Vehicle ownership grew at a much faster pace than the nation’s highways. More vehicles competing for space on our highways created more congestion. Our society also became much more mobile. As housing prices climbed, people seeking affordable housing traveled farther for work, and longer commutes became normal. As the economy grew, “We The People” became more affluent, and had more disposable income. The trend of off-shoring manufacturing to China and other Asian countries accelerated, increasing imports, which lowered costs and increased the amount of cargo traveling on our highways.

Our highways did not really grow in capacity. Although some roads did gain a lane or two, new exit ramps appeared, and some roads transformed from two-way single strips to multilane divided highways, the pace of road-infrastructure improvement never did keep up with the expansive growth.

Now add in the use of cell phones and increased driver distraction, and you have more crashes. More cars and trucks, many of them operated by people on cell phones, traveling more miles than the roads can support.

Something had to change. While some lawmakers focused on driver behavior, and other lawmakers focused on cell-phone use, a group of safety advocates and labor unions began to pay close attention to the accident rates of trucks. They began to lobby for changes to the hours of service regulations. The idea was that truck drivers were spending too much time behind the wheel and not enough time resting. These groups started to press the idea that driver fatigue was a major contributor to the increased accident rate.

Congress directed the Department of Transportation (DOT) to establish new rules for commercial vehicle drivers’ hours of service in 1995. The Congressional mandate directed the DOT to ensure that the rules took into account the latest science on human fatigue and alertness.

On May 2, 2000, the Federal Motor Carrier Safety Administration (FMCSA) posted the very first notice of proposed rule-making in the Federal Register. The goal was to provide drivers with better opportunities to sleep, and thereby reduce the incidence of crashes caused by driver fatigue. FMCSA estimated that 755 fatalities and 19,700 injuries occurred each year because of drowsy, fatigued commercial motor-vehicle drivers.

A summary of the proposed rule changes included:

Revert to an 11-hour daily cycle and a seven-day weekly cycle.

Adjust the work-rest requirements for various types of operations.

Require weekends, or their functional equivalent, with a minimum rest period including two consecutive periods from 11:00 p.m. to 7:00 a.m.

Require the use of electronic on-board recorders (EOBRs) in CMVs used by drivers in long haul and regional operations.

While everyone could agree that the HOS rule should be improved, reaching a consensus proved difficult because the root causes of accidents were unclear. Jim Hall, then the chair of the National Transportation Safety Board, highlighted the issue in a letter that he sent to then Department of Transportation Sec. Rodney Slater. In that letter, Mr. Hall highlighted "the difficulty in determining the incidence of fatigue-related accidents is due, at least in part, to the difficulty in identifying fatigue as a casual or contributing factor in accidents. There is no comparable chemical test for identifying the presence of fatigue as there is for identifying the presence of drugs or alcohol; hence, it is often difficult to conclude on each equivalently that fatigue was a casual or contributing factor in an accident."

For a long time the transportation industry recognized that fatigue was a contributing factor in accidents. Jury awards in civil lawsuits for negligence were rising. Major trucking companies were concerned about their potential liability and about the risk of loss. The captains of the transportation industry understood the need for changes to address the growing accident rate. Major players invested in additional safety programs to increase driver awareness. Major fleet operators such as Walmart invested both personnel and money into assisting in the accident research.

Regulators and the transportation company executives faced the challenge of a serious lack of solid data on the relationship between fatigue and accidents. Studies published at the time differed significantly in their estimates of the number and proportion of fatigue-related truck accidents. Different studies used different analytical approaches, specifically in the analysis of the causes of crashes. The data fell into two classes:  large-scale accident data files and data that came from intensive analysis of smaller samples of crashes. Real fundamental data that could tie accident rates to fatigue did not exist.

It is important to understand that this lack of data and the difference of opinion in the validity of the data continue to this day. The accuracy of the studies has often been questioned in the legal maneuvering that started soon after the 2003 rule changes went into effect. Arguments about the models, the data used in the models, how the models work, and the relative economic impact studies are constantly challenged in court cases, as the next installment of this series will illustrate.

HOS Criteria: What Is It, and Who Determines It?