Are You Cutting
or Are You Building?

Most of us in logistics are cost-focused. We are constantly looking for ways to reduce costs. In some cases, a cost diet is not such a bad idea. In other cases, it can make operations look a bit anorexic. The real skinny ones could be starving.

A New Normal Is a Stupid Line

Famed business author Tom Peters put out a book in 1997, "The Circle of Innovation – You Can’t Shrink Your Way to Greatness." Peters’ business book makes the timeless point that if you want to build a great business, you can’t cut your way to success.

“What we have to understand is that it is a new normal.”

“Whatever made you successful in the past won’t in the future.”

How many times have you heard those lines? Too many? Sure. Me too.

The only Normal I know is in central Illinois. 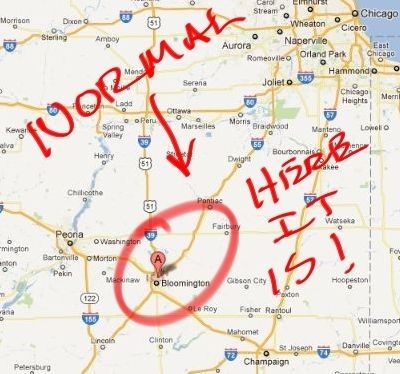 An old mentor of mine told me that there are no new ideas. He pointed out that new ideas were pondered by thinkers centuries ago. Even with new technology and inventions, the really important ideas have already been figured out. What’s more important is researching our existing body of knowledge to find an idea, and then to develop a new application for the old idea.

Innovation is not developing new ideas. It is applying old ideas to new problems.

If you are going to innovate, you must be willing to make changes happen. That is where most people have a problem. Change can be good, or it can be bad, depending on who is making the change and how they expect the change to affect their life. Fear is a powerful emotion, and it is usually the root cause of failure.

The world is constantly changing. Our bodies are constantly changing. The weather changes. Our kids grow. We get old. Customers’ needs and desires change. The norm is change, and therefore lines like, “what we have to understand is that this is the new normal" are stupid. A new normal would be a world in which all change had stopped.

Lately, I have been visiting companies that have done the best they can getting lean. They tell me how they have trimmed expenses, trimmed labor. They let poor performers go—suppliers, products, employees, even customers. In reaction to an economic decline, they cut every expenses they could.

Now they can’t grow their businesses. To their dismay, they are finding that as they grow their businesses, their internal operations costs climb at a faster rate. As the recovery came, some distributors added to their sales and marketing teams and pressed incentives—and their operations expenses grew faster than revenue. They added operations staff, more warehouses, and more drivers, but still the opex growth rate was higher than the revenue growth rate.

When I ask the obvious question, “Did you look at your processes and make changes when you reduced the staff?” they always answer, "Yes." To their credit, they did look at their processes. They looked at what each person was doing and shifted tasks around to the rest of the team. They moved tasks, but did not ask themselves what value the task created. They kept doing what they were doing. Except now someone who may have been already busy has a new task to do. Where do you think that task went on the priority list?

Looking at the performance of a prospective client, we found that as revenue improved, gross margin percent dropped. Why? Well, supplier costs went up, and the company was slow to react by raising prices. That was the easy answer. What really happened is that they used to capture the cost increase on the PO acknowledgement, and then decide to increase the sell price before the new, higher-cost product arrived in the operations. With the changes in staffing, the job of checking the PO acknowledgements landed on an inexperienced person who did not know what to do with them. So, that person did nothing with them. As a result, the company stopped capturing the cost changes on the front end. Oh, they still caught the changes on the back end, when the invoice arrived and the system changed the product cost, and the change ended up on the cost change report. Except now they caught that change days after the new, more expensive product was in the house and getting shipped to customers. It could be as long as 10 to 14 days before the sell price changed, a deadly delay where your products turn quickly and the market become volatile.

How much gross profit did they lose? Great question! They don’t know. The answer is not important! The action is. They need to get back to getting the PO price acknowledgements reviewed and the sell price updated quickly.

How did your company handle distributing tasks after the last layoff? Did some vital activities get dropped along with the people? How would you know?