Why did the last project you led disappoint? 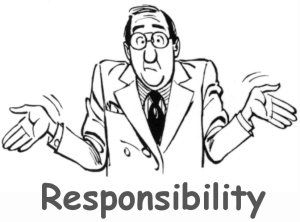 Tell the truth, there was disappointment. There always is. There is always something that did not go right. So why was there disappointment?

If you are looking around at anybody else, you are wasting your time.

It’s so much easier to blame other people. So much simpler to claim that others did not prepare us, or to blame conditions (the marketplace, the economy) for our own stagnation. It is quite easy to say, "I can't," when the real reason is, "I won’t."

One single fact no human can avoid:  We are responsible—"response-able"—for our condition. We are able to control our lives and to powerfully influence our circumstances by working on what we are. You choose to take action or not to take action. Nobody else can make your mind up for you. They may do something that leads you to a decision, but you make the decision. Or you don't make the decision. It is all you.

What if others don't follow your lead? Well, you failed to influence them. It was your responsibility to lead, and you failed to lead. So, it comes back to you.

Being assertive and taking initiative does not mean being pushy, obnoxious, or aggressive. It means that we recognize our responsibility to make things happen. Many people do not assert their thoughts or ideas, do not assert themselves in a way that enables them to communicate what they want. Expecting others to read your mind is a sure path to disappointment.

Reactive people attempt to absolve themselves of responsibility. For them it is far safer to say, "I am not responsible." If a reactive person says, "I am responsible," they might have to admit, "I have been irresponsible." It is very hard for someone to say that they have the power to choose their response and that the response that they chose resulted in a negative outcome. It is almost impossible for them to admit responsibility for bad results if they spent years absolving themselves of that responsibility, blaming their problems on someone else's weakness. In other words, if you take responsibility, you cannot with a clear conscience blame your failure on someone else.

It is one thing to make a mistake, and quite another thing not to admit it. People forgive mistakes, because most of us make mistakes of thought, mistakes of judgment, mistakes caused by a lack of knowledge or experience, or mistakes of oversight. But people find it very hard to forgive a mistake of the heart, of ill intention, of bad motives. And people do not easily forgive a prideful cover-up of the first mistake.

It is our response to what others do, or even to our own mistakes, that can hurt us the most. Imagine you have been bitten by a poisonous snake. What do you do? Chase the snake, or remove the poison? Making vigorous denials of our mistakes is like chasing the snake; just as chasing the snake drives the poison through the body, denial drives poison through the body of our relationships and accomplishments. It is far better to take measures immediately to get the poison out, to admit the mistake, and work to remove the harm caused by the mistake.

The best salve for disappointment is admitting your root cause and looking for a way to deal with it.

Are You Cutting or Are You Building?