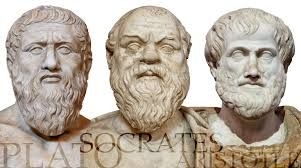 Plato learned from Socrates, and Aristotle learned from both of them through Plato’s writings, and the writings of other philosophers before him. These thinkers discussed and contemplated more than the meaning of life; they thought about thinking, and teaching others to think.

A few years ago, I sat in a deposition, testifying about how the president of a little warehouse company had overcompensated himself 20 years earlier. In my testimony, I referred to the writings of Peter Drucker, using that as a basis of argument about the role of a business manager. The attorney for the opposition sniffed at my use of Drucker, making the claim “Drucker is just some business philosopher.” My quick and sure reply was that Drucker was, “someone who thought deeply and taught the art and science of management long before you emerged.”

Thinking was so important to Thomas Watson, Sr. the leader of IBM, that he made the word THINK the slogan for his company, long before people started worrying about not hiring IBM. Drucker’s books are not a walk in the park to read, not because of the writing, but because of the depths of thought into which one paragraph can send you. 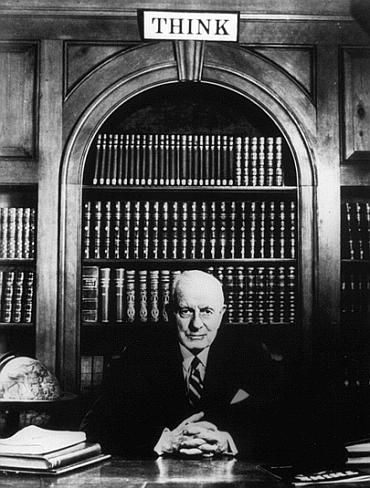 How deep do you think?

More important, how did you learn to think?

We take thinking for granted. Everybody can think, right? Perhaps. Perhaps everyone is capable of thinking, but they just don’t. Or they may not do it well.

Thinking is a cognitive exercise. There is that reasoning and judging part of the definition of cognition that makes cognition a mental exercise. I think that all humans can think, and many animals think. I watch the family cat while she looks around and thinks about the next place she is going to jump, what she is going to do to get our attention, or how she is going to ignore us. She knows things; she is hyperaware of her surroundings, she focuses her perception both with sight and hearing, and she contemplates what her next action will be.

Ever look at someone and realize they are, in that exact moment, thinking? Their expression is very different than when they are simply daydreaming. There is a certain look in their eyes. As one of my old bosses would say, “the lights are on and someone is home.” Thinking can be quiet. Thinking can be be done aloud during a discussion. Thinking can happen on paper, on a blackboard, on a white board, on the basketball court, on the baseball diamond, or behind the wheel of a car.

Thinking for some people is like breathing. Really, it is the breathing of the rational part of our minds as we imagine colors, music, machines. Thinking is human.

If that is the case, why is it that so many people act without thought?

A person who'd found me through my writings about Systems Thinking sent me a message asking if there were any primers on the subject. He is a trainer in a large company, tasked with training the outbound managers of his company to think more about the flow of their product through their fulfillment centers. I pointed him in the direction of Peter Senge’s book, "The Fifth Discipline," and urged him to read up on the subject. I also told him that while he was at it, he could read any of the articles about it here at "We Are The Practitioners."

His message made me think about the subject of teaching people how to think. It is not a new area for me; I plow that mental field several times a year. In fact, this series of articles is another effort to till the mental soil of that same subject. I reflected back in my memory, trying to perceive how I learned, and to remember who taught me and where I learned. I took philosophy classes in college—not the history, but classes on logic and ethics. I took a debate class. I remembered how my grandfather would get me to think through the questions he asked. The more I thought about it, the more I realized how much of my thinking skill came from the practice of thinking, and not instruction.

That is when I asked the question, "Can we teach people how to think?"

I believe we can. As I thought about my daughters, and their progress through elementary school, I questioned whether they were learning to think in school. Was there instruction in how to think? I don’t remember anything that focused on the how when I was in public school, even in high school. Sure, I learned to think through the application of my mind on math, science, history, and English. I remember teachers telling us to use our heads and think. But I do not remember any lessons about how to engage in thought.

A few years ago I took a week-long class on how to buy or sell a business. That is a subject that involves a strong mind; you have to think hard about the business in question, what is it worth, and what it could be worth. The teacher, an accomplished businessman named Keith Cunningham, shared with the group his method for thinking. Rene Descartes wrote about a four-step method for solving problems. Socrates taught his method to Plato, who wrote about the Socratic method of thinking.

How much practice do you put in?

A Hunger for Supply Chain and Logistics Knowledge