No One Told Me I Had to Be Bilingual...I Don't Speak XYZ Company, Inc. 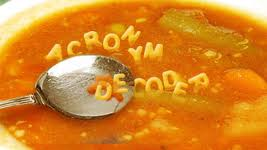 When you start a new job there’s always a learning curve. There are new people, new policies, and new responsibilities—all of which take time to get to know and understand. But there’s something else, probably one of the most important things that any new employee must learn (and learn quickly) in order to be effective in his or her new role. It’s learning to speak the language of XYZ-CO—that is to say the lingo, office slang, and acronyms that exist within the four walls of the business for which you work.

Each organization has a language all its own, made up of acronyms and office slang. Some of the language may be industry lingo, but to some extent the language will be specific only to that business. At my last company we spoke many languages.

One of the most important languages we spoke was Chinglish, a business-critical language we used in correspondences between our company and our partners in mainland China, Taiwan, and Hong Kong. Chinglish is a style of communication that is influenced by the Chinese language and is also a much more formal version of our English language than what we use in regular conversation. It took most people six to eight months to grasp Chinglish, while others still don’t understand it to this day.

You see, the key to learning to speak and write Chinglish isn’t in your ability to read and write it. The key is to recognize and understand meaning by what is NOT stated. This isn’t reading in between the lines stuff. This is reading the lines, stepping into the shoes of the other party, figuring out what could go wrong, what might be going wrong already, or what short-cuts might be taken, and inferring the other party's meaning by looking at the entire picture.

Chinglish is not a language we trained everyone on; it was for a specialized team made up of Operations, Product Management, and Sourcing people only—those of us who had a direct relationship with our partners. The cost of misunderstanding this language would have been high; a misunderstanding could have brought business to a screeching halt. And those of us fluent in the language had the responsibility of translating communications and conveying messages to the rest of the organization.  Responsibility for this communication was handled with care—even those of us who spoke it fluently still got burned once or twice.

Acronyms are a second-language challenge facing new employees. Why? Because they aren’t even words! From a Google search I found a website, All-Acronyms.com (http://www.all-acronyms.com/tag/logistics) that contains 672 “logistics acronyms!" Now that’s a lot of four-letter words. But they aren’t words, and therein lies the problem. If that’s one website for one industry, then imagine the number of acronyms a company made up of multiple departments could have!

Imagine being a new employee walking into a meeting on your first day and hearing something like this: “I checked the BL and MAS. I think the 3in1, POD, T8, and the AB were sent to the wrong person. JAS says they need three more before EOD on Friday or else it won’t make the POG.”

Most employees would become totally confused and left wondering what the hell we were talking about—and rightfully so, because in these two sentences I used eight acronyms! It is possible to infer a little from what I said, but unless you deal in lighting, work with consumer goods or in logistics, or you worked at my last company, then I'm speaking a different language.

So, what’s my point? My point is that you have to teach people the language of your business, and it starts the minute you make the hire. I have watched too many new employees struggle with this learning curve. It is painful to watch, and it doesn’t have to happen.

How do you teach XYZ-CO speak to a new employee? One great way is to provide them with training materials to study and reference. Creating a glossary of the common phrases, acronyms, and language of your business will not only help new employees get up to speed, but can be a fun exercise for the entire company. Invite all employees to submit words. Make it a game, and give away prizes for different submissions. This is a great way to capture the information and engage the entire organization with a little bit of fun.

At DKS, we are acronym-happy! We have our own language, and as our company grows, so does our glossary. We add to it and share it, because if we aren’t all speaking the same language, then we aren’t really communicating.

What Is the Genesis of Knowledge?