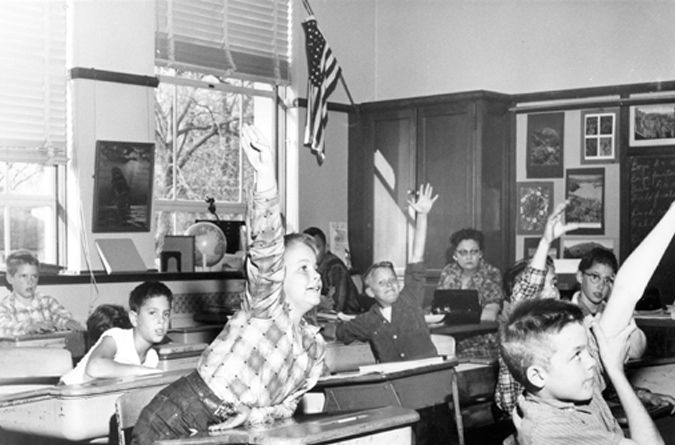 When was the last time you sat in an elementary school classroom? For me, it was a few years ago, when I went to a parent meeting with my daughter’s teacher. I noticed that the desks were arranged in pods of six, rather than in rows.

This pods-of-desks idea is not new. I remember seeing these pods when my oldest daughter went into the second grade. The desks are only one visual reminder of the changes that have taken place in elementary school education. Teaching the basic skills, — reading, writing, and arithmetic, the classic "3 Rs" — is no longer the core focus. These skills are still important, but so is the schools' mission to teach critical thinking, foster curiosity, and encourage students to explore ideas.  Students are learning how commerce works, and they are learning about the banking system, the history of Virginia as a colony, and the roles Native Americans played in that history. In the public schools that my daughters attend, these other elements are just as important as the basics.

The change did not happen in an instant. As I was processed through public schools in the late 1960s and the 1970s, I attended school in four different school districts, two in New York and two in Missouri. Rows of desks and seating by the alphabet ruled the day when I walked into my first class in 1966. By the time I flipped the tassel at my graduation in 1979, rows of desks were still the rule, but not alphabetical seating. Some classes were arranged in pods, or around tables seating four or six kids, but for the most part, desks arranged in rows facing the front of the room was the norm.

Is the arrangement today better than what we children of the '70s had? Perhaps. Learning early to work as a group fosters the group mentality that we see in the millennial generation. Moreover, the change in content is more telling than the simple arrangement of the desks. Is what I see in the public school district here in Northern Virginia mainstream or an exception? How rare or how prevalent is teaching critical thinking at the elementary level?

If the schools are better, why do so many parents elect to home-school their children or send them to private and church-based schools? Why are there over 150,000 children on the waiting list for charter schools in New York City? My daughters are fortunate to live in a good school district that offers advanced academic programs. What about all the other kids? How is the education system addressing what we will need in the workforce of the future?

Perhaps, the word workforce is part of the problem.

Although we tend to think that compulsory education was what ended child labor in the rural fields and in the urban factories, industry provided a great deal of the momentum. As our society harnessed the transportable and cheap power of coal-fired steam, and later petroleum-powered machines, the titans of industry faced an oversupply of talent.

Before we return to my assertion that there was an oversupply, consider that in the 19th century, before the Common School movement gained momentum, literacy in the US was much higher than today. Finding actual data to support this assertion is hard, so we have to use a thinking exercise, a Gedanken, to prove the point. In 1776 Thomas Paine authored "Common Sense," a pamphlet explaining in simple, clear language the need for immediate American independence from England. At the time, about 2.5 million people lived in the American colonies. In the first three months following its publication, Paine’s work sold over 120,000 copies, and after 25 printings it had sold over 500,000 copies in its first year. While some of those copies were sold in France and Britain, just the first three months of sales reached almost five percent of the entire population of the colonies. Assuming that 1/5 of the printed copies traveled to Europe, Common Sense reached over 16 percent of the population. People read the book out loud at meetings, in taverns, and on the street.

While Paine’s work was in straightforward language, it might be a challenge for most of our school-aged readers today. Literacy was far from universal in colonial America, just as it is far from universal today (though some may assume that everyone can read). According to the National Assessment of Adult Literacy (NAAL), only 13 percent of the American public can understand Paine’s work at the highest level of proficiency.

(If you want to know more about this mental exercise, read this great article by Sanjoy Mahajan at the Freakanomics Website.)

If we take our conservative assumption that 16 percent of the population could read Paine’s work, then the literacy rate in colonial America could be higher than the current literacy rate.

Now, I realize that we are playing fast and loose with some numbers, and making assumptions. However, here is something to ponder. Formal compulsory school systems did not exist in the colonial era. Yes, there were academies and schools, but for the most part, people learned reading from the Bible and hornboards, learned how to write using copybooks, and did their math on slates, inside their own homes, taught by their family.

Many of the bright, intelligent, thinking people behind our political revolution were the products of home-school educations. They learned to think, dream, and do based on what they learned from their family and friends.

Revolutionaries do not make good employees.

What Is the Value of College?