Every year, we celebrate Labor Day. In honor of this holiday, we are going to look at a cultural labor management issue from Japan, where employers have come up with a novel way to deal with employees they don’t want anymore. They send them to the Banishment Room.

Japan has long been home to the idea of lifetime employment, but major companies there are now looking for ways to show marginal, unproductive, and redundant employees the door. Many companies in Japan have no problem showing employees the door, and many of them are even willing to pay for ongoing benefits. For companies not willing to pay for benefits, urging the employee to find other employment by assigning them to dull work is the answer. 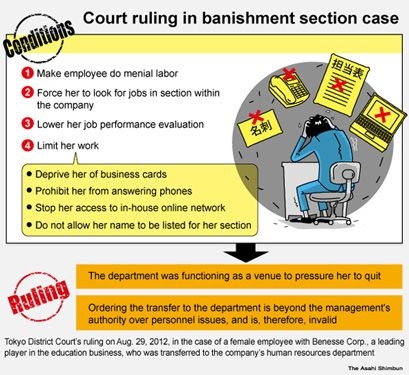 I first started to read stories about the Banishment Rooms. Rarely did I see stories about the practice here in the US, except on English versions of Japanese media sites. There is also quite a bit of coverage by blogs that cover Japanese culture.

A middle manager in Japan is called a salaryman, one who is not time-bound for his pay. Bonuses are a big part of the compensation scheme for salarymen, as is the performance review. Another perk of the job is that once you are employed, you stay employed.

If you haven't been paying attention, the Japanese economy has been in rough shape for much longer than the US economy. Stagflation, no growth, and an aging workforce continue to drag the economy down. Companies in Japan now face what we here in the US call “restructuring,” which is リストラ in Japanese. Large Japanese companies like Hitachi, Sony, Sharp, Olympus, and Panasonic are now facing the reality that not only are their side businesses declining, their core businesses are declining too.

Forced to lay off more workers, these companies are turning their backs on the once unbreakable promise of lifetime employment in the social contract:  servitude in exchange for financial security. That social contract is backed up by Japanese law. Like countries in the EU (think France, Italy, and Germany), full time workers enjoy extreme protection from dismissal, and it is a legally difficult, time-consuming, and expensive process to fire them or lay them off. What do the companies have to do?

So, Japanese HR managers have developed a new innovation, the 追い出し部屋 (oidashibeya), literally translated as expulsion room. To get around the legal requirements, the companies have reportedly created new divisions where they send employees targeted for layoff. Transferred to the new division, the employees are encouraged to quit or accept an early retirement program. This appears to meet the letter of requirement #2.

I looked for stories about what the Banishment Rooms were really like. And I found one that may be surprising to read, from The Asahi Shimbun story: BANISHMENT ROOM:  Former trucking managers feel abandoned in Amazon.com warehouse.

In a warehouse the size of two soccer fields, a worker in his forties starts his lonely rounds, picking books, DVDs, food, clothing and other goods from shelves and putting them in a cart. This is pretty much all he does from 8:30 a.m. to 5:00 p.m. As he pushes his cart through the sea of shelves, the man says he often wonders how long he will have to continue such a mundane job.

“I move around based on instructions shown on a terminal and seldom talk to other people,” he said. “I even feel as if I have become a machine.”

The story highlights the life of a former midlevel manager with Nippon Express, the 3PL operator for Amazon.co.jp, the Japanese operations of the American e-tailer. Faced with diminishing business and tough competition, the company restructured its business, consolidating over 170 branch offices, and transferring ownership of the parcel express division to another company.

“The company plans to downsize its bloated administrative division and is targeting office workers in midlevel managerial positions, whose salary levels are relatively high,” an employee said. He said it is understandable because they are among a large number of workers who joined the company during the asset-inflated economic bubble of the late 1980s, and their salaries are much higher than those of younger employees.

Here in the US, that kind of restructuring would lead to layoffs, people on the street. There might be a severance package, and some assistance in finding a new job, but not much else. In this story, and the others that I read, the company reassigns the managers to positions where people are needed. These positions may not be management positions, but they are paying positions, albeit not at the same level of pay as the previous management position. As one Nippon Express representative said, new assignments with drastically changed work contents and salaries "cannot occur under ordinary circumstances. We do not consider them as banishment, and it is natural for company employees to grow through the job they are assigned to.”

Is the 追い出し部屋 (oidashibeya), the expulsion room, really that bad? That depends on your point of view. If you are an American manager who lost your job in the last economic downturn, and you had to find — on your own — a lesser job to feed your family and pay the mortgage, then having your employer put you into a position the way Nippon Express did with its former managers could look like a blessing.

However, if you look at the heart of another story in the graphic above, the Tokyo District Court found that the company’s action was an effort to pressure the employee to quit her job.