Getting More Out of the Systems

“How bad are WMS start-up failures?”

A colleague asked me that question after my presentation about Start Up Distribution Center Failures at the Warehouse Education and Research Council (WERC) meeting in Dallas in May 2013.

My presentation focused on new distribution centers — start-ups. In the presentation, I highlighted that failure is the option that nobody wants to admit exists. Failure is a term that people want to avoid, so they work hard to develop alternatives, like satisfaction or achievement. Our culture goes as far as giving an award to any child who participates in a competition, so nobody feels like a failure.

I don’t buy that notion. In the presentation, I did more than suggest that many start-up DCs fail; I insisted that most fail. Whether a start-up is a failure depends on the criteria you use to define failure. Not all criteria fit all applications, but I believe that the best way to avoid failure is to define undesired effects (UDE) or undesired outcomes. If you declare that a potential outcome is undesired, and you arrive at that outcome, you have failed.

So I presented these as potential example markers of failure. 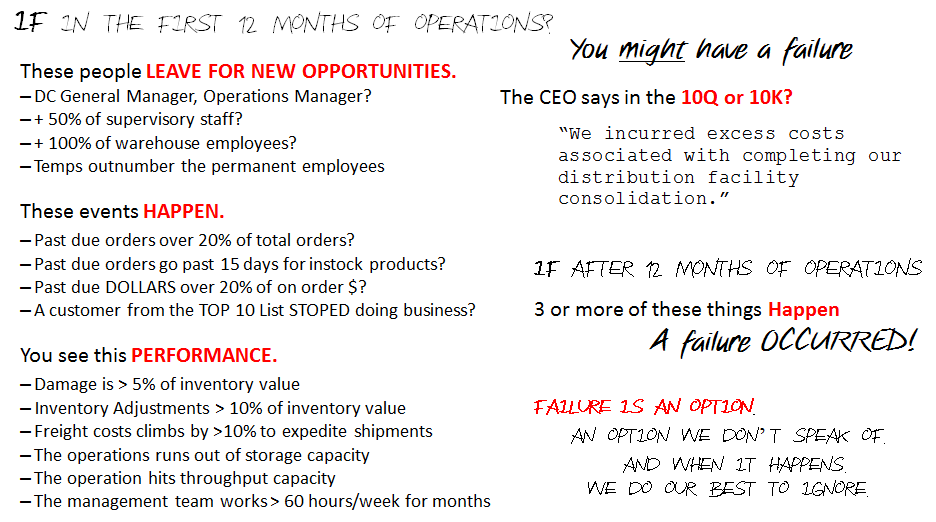 What my colleague wanted to know is if these same markers can be used as criteria to define the failure of a new WMS project. I think so, but only in the framework of what happens inside the four walls of the warehouse. And not all these criteria apply cleanly. Storage utilization or throughput capacity can suffer if the WMS is not configured correctly, or if the staff improperly uses the WMS, but other factors outside the warehouse can also affect capacity and throughput.

Avoiding any of the failure points above is not the mark of success. Just because you avoided failure does not mean you scored a victory.

Why do I say that?

Because I have seen those rare instances in which failure-free WMS implementations harmed the company organization and harmed the departments inside the warehouse. Just because things went hunky-dory inside your warehouse does not mean that the WMS was a success for your company! Your successful WMS launch could mean the failure of other systems.

Yes, other systems.  Let’s think of this from a hierarchical structure:

All of these are systems — systems within systems, overlapping, sharing space and information, interrelated and interdependent on one another to create value and fulfill their purpose.

Monumental victory is the product of systems thinking.

Let’s first define a system. A system is a set of interacting or interdependent components forming an integrated whole or a set of elements, (often called components) and relationships that are different from relationships of the set or its elements to other elements or sets.

Although many managers prefer to think of the supply chain in simple terms, no supply chain is simple. Supply chains are combinations of different systems that move materiel, money, and information between physical and virtual locations. Supply chains extend beyond the confines of a warehouse, the boundaries of a business enterprise, and the borders of a country. Seldom dedicated to a single thread of supply, the components of a supply chain are parts of a larger, shared services system.

Business enterprises that thrive and grow look forward, beyond responding to immediate problems. They look at the behaviors of their organizations to understand the needs of the market and the resistance of the competition. Thriving enterprises work on solving future problems. They do not have to worry about current problems because at some point in the past, they looked into the future and identified potential problems, developing solutions that they now execute.

Working to get the most out of your current systems is not an activity to engage in once you have launched the system; it is a never-ending process. Systems thinking moves beyond the technology, including the people and community that form the human systems. Systems thinking examines and addresses the cognitive abilities of the people, their ability to observe, think, reason, communicate, solve problems, and learn. Successful systems implementations help the people in the systems become smarter and ease the burden on managers, enabling the guy doing the work (the guy in the gemba) to make his own decisions with the knowledge and competence that he is contributing to the good of the organization.

Systems thinking behavior requires a systematic approach to thinking. It is very hard to do alone. Systems thinking is a group exercise, because it involves other internal departments in the company, trading partners, banking partners, and services partners. Defining comprehensive requirements to guide design is hard work. Addressing the relationships between departments, divisions, and companies in a sustained way can become a monumental effort. Yet the work leads to a foundation of requirements (some positive, some not) that can drive success for the warehouse, the company, and its supply chain.