Success to the Successful

Another team- or activity-based dynamic system we see in logistics operations is Success to the Successful.

In 2008, Sears Holdings rolled out a new decentralized corporate structure, cutting the company up into over 30 different independent business units. Called SOAR (Sears Holdings Organization, Actions and Responsibilities), the plan broke the company into autonomous businesses, each with its own board, president, marketing, and financial statements. Each department became a business unit, and CEO Eddie Lampert expected each business unit to generate profit. Gone were the subsidies by which non-revenue departments just supported other parts of the business, Lampert expected non-revenue departments to contribute Business Operating Profit, BOP. 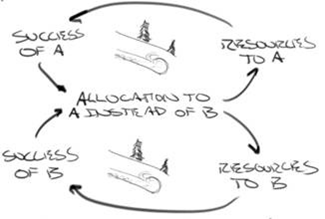 Sears employees had a different name for the program — SORE.

Under the new program, unit managers’ bonuses depended on the performance of the unit, measured by the operating profit the unit created (BOP). With a single metric came a singular focus by the business unit managers, a focus only on the profitability of the business unit and forgetting the welfare of the company as a whole. Some groups cut back on labor, knowing that labor from other groups in the store would take up the slack. Turf wars erupted and escalated. According to departed executives, the new program discouraged cooperation. Without a holistic doctrine and strategy, business unit leaders focused on individual unit profits, often hiding their plans from other unit executives.

Overall, sales and revenues dropped. The business units clashed over resources, including cash funding. Sears Holdings senior corporate executives defended the program, claiming that the clashes over resources were simply a product of competition and advocacy. Spokesperson Chris Brathwaite went as far as to say that competition and advocacy “were sorely lacking before and are lacking in socialistic economies.”

As sales and revenues dropped, so did the cash available for capital expenditures. The business units discovered they were fighting over a smaller pile of cash. The winners in the CEO’s eyes, like the online business unit, received more funds and attention from the leader than the traditional parts of the company. While the company does not break out the details of the contribution of each of the business units, former insiders tell stories of the e-commerce unit: “there’s a lot of attention from Eddie and you have a lot of money to spend.”

Two (or more) activities or teams compete for limited support or resources. The more successful one team becomes, the more support and resources it wins, starving the other teams.

Competition heats up. After the second cycle (sometimes after the first cycle) the lower-performing teams voice concerns about how unfair the system has become. Internal complaints grow, sometimes taking the form of gallows humor or sarcasm (SORE in place of SOAR). After three cycles, leaders of the starved parts of the organization depart for better positions and different companies. Senior executives defend the program as fair — using revenue or profit-margin percent to allocate more to whoever is more successful.

Success to the Successful is often the product of a single-minded focus on a singular metric, like profit, or productivity, at the lowest levels of the organization. While a metric like Operating Cash Flow is a great measure to determine the success of the organization, or to understand the contribution that a business unit makes to the overall OCF, it is a poor metric to use to determine allocation of resources.