Let’s engage in a quick experiment.

Did you see a straight line? No?

OK. Let’s now do the second half of the experiment. 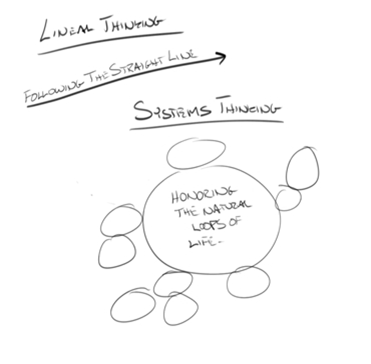 Systems repeat. Examine any system and you will find a common feature, the process repeats itself. Only when there is an intersection on influence does the system stop, only to restart with a new influence.

How many times has a tech support engineer told you to “recycle the system” by turning it off, and then back on? The planets in our solar system orbit the Sun, traveling in elliptical loops. The planets are spherical, held together by a single center point of gravity.

If systems operate in loops, cycling and repeating, how should we draw them?

A circle? You get a gold star.

The Basic Elements of Drawing a System

Starting with a few observations:

Does a circle have a beginning or an end? No. Circles are endless. If we are using a circle to represent a system, where does the system start? Observation #4 above is our clue — the point of influence.

Let’s start with a simple notion:  you are thirsty. You are playing softball and have just come in from the outfield. It is the fifth inning, and it is hot out there in left field. You’ve worked up a sweat from the exertion of shagging the fly balls and backing up the infield. Your body sweats in order to cool itself. The more you move around in the heat the more your body sweats. 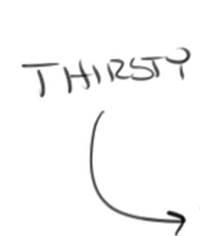 As you walk off the field, you notice that your saliva is thick, and the inside of your mouth feels parched. You are not dizzy, but there is a sense that if you don’t have something to drink you may get dizzy.

Your body is a collection of systems. Your digestive system absorbed into your blood stream the water you drank on the way to the ball field. You heart pumped your blood through your circulatory system. The blood transferred water and sugars to cells along the way, picking up waste to carry to the kidneys.

Your body sensed the heat from your exertion and the hot air. Without any conscious thought on your part, the cells of your skin moved water through your pores to the surface of your skin.

As the water drained from your pores, your body started to draw water from other areas, including your muscles and the various mucus membranes in your body, notably in your mouth and throat. Your body experienced dehydration, but the first conscious thought that you need water comes to you as you come off the field, feeling parched.

All these complex actions and influences work automatically, without you thinking about them. The first conscious thought you have as you walk off the field is, I’m thirsty. That thought is an influence injected into a thinking cycle. You may or may not consciously think next about what you want to drink. Still, you will think about these different factors when making your decision.

You see the cooler as you walk into the dugout. You think that a cold beer would taste great right about now. You can just about taste that Coors Light… until you look at your watch and see it is only 10:30 in the morning.

You desire a beer. But it is early in the day, and you have two more games to play after this one. While a beer would taste great, it is too early to start drinking beer. The setting —the time of day — influences your decision about what to drink. You want to play well the rest of the day, and drinking a beer will make playing well hard to do. Drinking a beer during the game will bother the rest of your team too, so you make a conscious decision that beer is not on the menu for now.

When you get to the cooler, you flip the lid up and peer inside. Nestled in the ice are cans of cola, some bottles of sports drink, and bottled water. There is some beer too, but you’ve decided to skip that until the last game.

May as well have water. You grab a bottle, close the cooler lid, crack open the bottle, raise it to your lips, and drink down half of it. 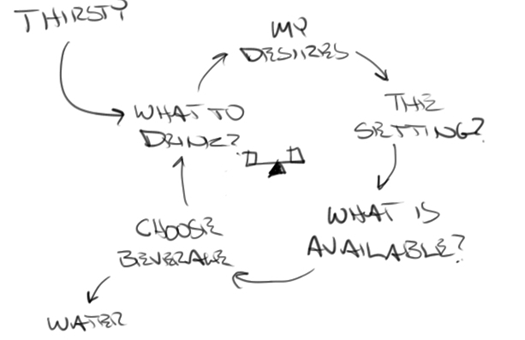 The illustration here presents in graphic form the thinking system that I’ve just described in 311 words. As described, the process looped at least twice, if not three times, as we dismissed first the beer and then the sports drink when all we found was the red stuff.

Notice the balance symbol (the teeter-totter) in the middle of the loop. That indicates that this system is a balancing system, wherein the decision was based on at least three factors:  your desire, the setting, and the selection of things available to drink.

This example does not seem overly complex until you think about the various decisions that had to be made, and the different factors that influenced those decisions.

If you think the circle is complex, here is a challenge. Draw a traditional process flow chart that pictorially describes this exercise.

Which is more complex?