The problem with managers is that they do the first damned thing that pops into their minds.

This single sentence is perhaps the best description of Archetype #9.

The new scooters proved to be so hot that customers bought them as soon as the boxes hit the shelves. Retailers fought for the limited inventory. Because the scooters were imported from China, the supply chain could not speed up fast enough to meet demand. 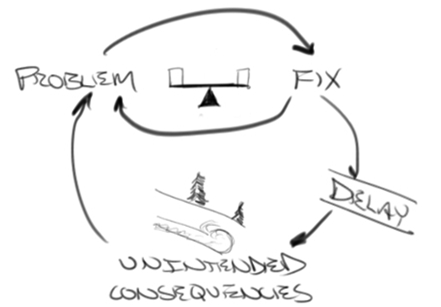 The length of the supply chain and transit delays were only part of the problem. The retailers increased their orders above the plan. Company managers in the US increased their orders to the factories in China. The factories scrambled to increase the supply of components from other suppliers in Asia, who in turn scrambled to get the raw materials they needed to make the parts. For a while, the Chinese factories could keep up with the demand, keeping a six-week lead time between the issue of the purchase order and the availability of product in the US warehouse.

Retailer shelves emptied as soon as product arrived. Retail managers were sure that the demand was growing, and while they could not get the product faster, they increased the size of the orders from the supplier.

At the supplier, the inventory control managers saw the new orders and quickly discovered that retailer demand was now greater than what the factories could produce. The US-based managers talked to the factory managers in China about increasing capacity. The Chinese managers pushed back, saying that they could not increase capacity. Left with few options, the US managers quietly started to allocate supply to their customers based on the date of the order.

At first, the allocation helped spread the supply. The US managers accepted orders on a first-come-first-honored plan. Once the managers allocated the planned supply for a specific week, they just moved the PO to fill the following week, pushing the ship date back in a message to the retailers. Retailers, hearing about the delay, increased the size of their orders.

Problems started to appear a month after allocation. The capacity of the West Coast dock operations to unload containers, palletize the scooters, and load the trucks to ship to retailers was insufficient to keep up with the demand. The company used a 3PL service for the physical work. While the 3PL had lots of dock space, the 3PL served many customers, and all of those customers were having a busy season. The 3PL could not keep up with the volume demanded by many of its customers, and so unloading and shipping fell behind.

Some retailers used vendor charge-back programs, taking discounts for late shipments or late pickup notice. The US managers were at first unaware of the throughput capacity at the 3PL, only learning of the problem when they got calls from unhappy retail buyers about late shipments. Managers really took notice as retailers started taking deductions off invoices for late delivery or fill-rate shortfalls. The US managers put more pressure on the 3PL to pick up the pace. The 3PL responded by adding another shift and moving orders around in its schedule.

Pre-paid freight terms, under which the US supplier paid for the transportation, applied in about half of the orders. For the other half, collect terms applied, so the customer selected the carrier and managed the transportation. The retailers using collect terms depended on messages from the supplier advising them when to schedule the trucks to make pick-up.

This is when the problems really started. Fighting to keep up with all the activity, the 3PL moved its schedule around. When processing a pre-paid terms order, the 3PL picked the order and loaded it directly onto a truck, dispatching the load quickly. The 3PL managed the outbound transportation, and ordered the truck the afternoon before picking the order. But with collect orders, the 3PL did not arrange the transportation. The 3PL would advise the US scooter company managers that the orders that would ship the next day. The US managers then advised the retailer transportation teams.

Freight waiting for customer pick-up started quickly piling up on the 3PL dock. Some retailers had very good transportation connections, and even with the short notice could schedule same-day pickup. Other retailers needed a full day to make arrangements, and sometimes two days. So, many retailers imported through the West Coast ports, and the combined seasonal volumes reduced the available truck capacity.

Many retailers scheduled pick-up to happen one or two days after the 3PL picked the scooters, following the terms of their agreements. Some retailers, desperate for the scooters, turned to freight brokerages for capacity. With a tight supply of available trucks, these shipping departments ended up dialing for diesels, calling broker after broker to get the needed capacity, paying more than what their normal carrier would have cost.

As freight piled up on the dock, the 3PL became less efficient as the marinating freight took up needed space on the dock. The 3PL could not process inbound containers at the same pace, so inbound started to pile up. Even pre-paid orders slowed down as the 3PL became jammed with scooters awaiting customer pickup.

The brokered trucks arrived as scheduled. The 3PL, buried under the waiting shipments, could not process the trucks quickly enough, and the carriers charged the retailers detention and delay fees. The 3PL paid the pre-paid carriers, and loaded those trucks first to avoid the delay fees.

While allocating purchase orders to meet factory capacity helped the scooter company, allocation did not help the US logistics operations. Even when the company lowered the allocation again, it was too late, and inventory continued to pile up. Demand at retail dropped, and some retailers canceled orders. In the end, both the company and the retailers held too much stock, and the closeout sales started. The collect terms customers that used brokers to move the shipments charged back the detention fees, and sometimes deducted the difference between the broker cost and the regular carrier cost.

What at first appeared to be a great program quickly became a nightmare, and the company experienced a cash loss on what should have been a great cash generator.

In Fixes That Fail, the short-term fix creates an unforeseen, long-term consequence that requires even more of the original short-term fix. In the example above, allocating demand to weekly supply was the fix. However, allocating orders to factory capacity did not address other fundamental capacity issues in the supply chain. Pushing order ship dates back encouraged retailers to increase the quantity on the next order, and larger orders ate through the capacity quicker.

Allocating to the factory capacity, and not the system capacity, was what really caused the failure of the fix. The real problem did not appear until well after the application of the fix.

“This worked before, why not now?” is the hallmark phrase of the Fix That Fails system. More important than what you hear is what they don’t say, which provides the early warning. When the fix focuses only on the front half of the supply chain, from raw materials to production, trouble lurks, because capacity issues on the back half of the supply chain do not appear until after the fix is applied.

Fixes That Fail is a common Systems Archetype. Perhaps the best way to avoid this problem is not to do the first thing that pops into your head. Managers must maintain a long-term focus, and employ a fix only to buy time for a long-term solution to take hold.