Goal setting is a big deal in logistics. Warehouse operators set goals, just as transportation managers set goals. We all set goals. The real question is, Who makes their goals?

How many times have you set out to achieve a goal, and in the act of working for the goal, moved the victory line a little closer to where you were? Once? Twice? Do you decline to answer because you might incriminate yourself?

The Eroding Goals archetype is typically a negative system that creates a downward spiral of performance. In some cases it can also explain the adjustment that fast-growing companies must make as they encounter better-than-expected results.

Cutting Back in the Downturn

In the aftermath of the financial crisis of 2008, many companies cut back on staff and inventory as economic conditions deteriorated. As the crisis removed liquid capital from the credit markets, the managers of many companies that depended on lines of credit to provide cash to support inventories, payroll, and operations expenses found themselves tight on operating cash. Some companies failed. Others cut back on personnel, stopped projects, slashed service agreements, and canceled equipment replacement plans. 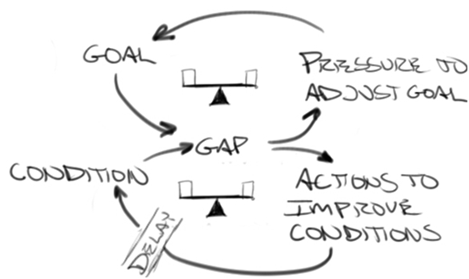 Companies adjusted sales budgets downward, setting budgets to “reasonable expectations.” As the economy continued to flounder, companies again revised their already reasonable budgets to make them even more reasonable. Some companies put more effort into sales, doubling down on phone sales and e-mail campaigns to save cash. For many companies, another round of sales budget adjustments was the answer, a way to meet even lower expectations.

In effect, every time management set a new goal, they narrowed the gap between the goal and the actual performance. The sales team would then do more of the same — more telephone calling and more e-mail campaigns to improve sales — with the same lackluster results. After working at it for a while, management would look at the actual conditions, see the gap that remained between the performance and the goal, and feel pressure to adjust the goal.

This system can work in a positive growing network. A smaller group of companies took advantage of the downturn to move ahead, using their cash reserves to expand their offering and invest in capacity to build for economic recovery. For example, as companies shuttered retail outlets and unloaded excess inventory, closeout stores with deep pockets and solid cash flow bought distressed inventories off the market at a deeper discount. Some retailers took advantage of discounted leases of empty retail space. The major food service distribution companies, like Sysco, Performance Food Group, and Reinheart, went shopping and bought smaller regional foodservice distributors. Without taking on large debt, the bigger companies bought companies in a distressed condition.

Increasing revenue, and thereby increasing earning dollars, was the goal of these growing companies. With each acquisition, revenue increased, closing the gap between goal and performance, with performance sometimes exceeding the goal. Management felt pressure to adjust the goal higher, and the perceived gap increased motivation to increase the acquisition activity.

There is always a gap between goal and performance. In the Eroding Goals archetype, the people in the system shirk their responsibility to develop and take actions that really improve conditions, settling instead for moving the goal. Reaching a goal is always hard. It requires disciplined thought and action. The resistance in the system creates pressure to lower the goal, to relax the standard, in order to make reaching the goal easier. But performance does not change because the real prescriptive change does not happen, and the group fails to reach the easier goal, creating more pressure to further relax the goal.

In each case, the rationalization overlooks the opportunity lost by failing to take action now, or failing to hold firmly to standards.

Strong leadership — from the top, the middle, and the bottom — must hold the line against eroding goals.

Shifting the Burden to the Intervenor — Systems Archetype 4