The most basic of the archetypes, the Balancing Process With Delay shows up everywhere. Let’s look at an everyday example:

It is summertime. It is hot outside. You come in and it is hot in the house. Looking at the thermostat, you see that the air conditioner is set to 80 degrees and the thermometer reads 80. You remember that in an effort to save a little money on the electric bill, you have been setting the desired temperature up to 80 when you leave for work in the morning. 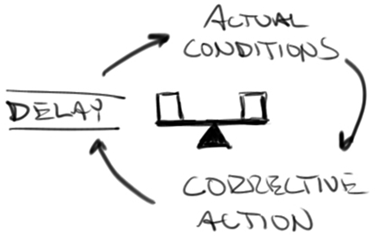 Well, it is still too hot. So you set the desired temperature to 75 and go change your clothes. The A/C kicks on and you can feel the cooler air starting to move around the house. It will take a while for the A/C to cool the house down, so you decide to go for a run.

While you are out on your run, your wife gets home and notices it is hot in the house. She makes a beeline to the thermostat and sees that it is set for 75 degrees. Failing to look at the actual temperature, she pushes the setting down to 68 degrees, thinking that 75 is still too hot. The A/C is already running, since it had not even got the house air temperature down to the 75 you set.

You get home from your run. The air in the house feels cool, really cool. But you have been running in the heat and think that it feels really cool to you because you are hot from your run. You take a quick shower and go to the kitchen to help your wife with dinner. Dinner is stir-fry with pasta, so the stovetop has a large pot of boiling water for the noodles and the stir-fry pan. It is hot in the kitchen. Your bride, feeling the heat and the humidity from the pasta pot, checks the thermostat around the corner from the kitchen and kicks the setting down to 65 degrees.

You sit down for dinner with the family and your daughter says she is cold. Still warm from the work in the kitchen, you feel okay at first. But then you begin to feel a little colder. The air is clammy too, as the A/C is working hard to chill the air but is not able to draw out all the humidity. By the end of dinner, the whole family is feeling chilled.

You get up to check the thermostat. The air temperature is now 67 degrees. You see that somehow the thermostat is set to 65 degrees. How did that happen? You call out to your wife about the thermostat setting to ask if she set it. She doesn’t quite hear you, and thinks that you are asking her if she wants it turned down. You hear “I’m too cold. Turn it up!”

So you turn it up, setting the thermostat to 75. But the system is set for cooling, not heating. The A/C shuts off because the desired setting is higher than the actual temperature. Slowly the air warms up, but it never reaches 75 degrees before everyone goes to bed.

Describing the Balancing Process With Delay generically:  the system, acting to achieve a goal, adjusts behavior in response to delayed feedback. If the delay is not deliberate, multiple over-correction occurs, eventually causing those involved to abandon the project due to their perception that there has been no progress, or or even to take further over-corrective action that leads to more delay.

In our example, we set the temp lower, the A/C turns on to chill the air, and it takes time for the air to reach the desired temperature. This is a sluggish system, in that the feedback (cooler temperature) is slow to respond to the corrective actions (lower settings).

What the People Say:

A lack of patience is the root cause of the frustration. “It takes too long for the A/C to cool the house,” may be the complaint you hear from your wife.

“We overshot the correction,” is something that managers sometimes say after the fact. In the middle of the event, before the overshot, you may hear the managers say, “Our response is too weak,” or “The customer did not get our message; call them again.”

Sluggish systems become unstable with aggressive or uncoordinated change. The greater the degree to which the process is adjusted, or the more frequently it is adjusted, the harder it is to keep the process stable. There are two management principles to follow: