It was no surprise when, a few years ago, the Obama administration chose to put off the decision on the route of the Keystone XL pipeline until after the 2016 presidential election. There was a political agenda afoot, and to deny that politics was at play is to be blind to the facts. I will let others vent about the political ramifications of the President’s actions. What we will do here is address some ignorance about the logistics of oil in North America.

If you had not been paying attention, the Keystone XL is a pipeline built by the Canadian pipeline company, TransCanada. TransCanada is investing over $13 billion into the pipeline system to link the significant oil reserves in Alberta to the largest refining markets in the US.

The two initial phases of Keystone are up and operating today. TransCanada converted an existing 30" natural gas pipeline into a crude oil pipeline and constructed what the company calls “an innovative bullet line” that brings the crude oil from Canada to three Midwest US market hubs. Phase 1 connected it to the massive Wood River, Illinois refinery and the tank farm and existing pipelines in Patoka, Illinois. Phase 2 creates a new pipeline that stretches from Steele City, Nebraska across Kansas to the large oil distribution center of Cushing, Oklahoma. 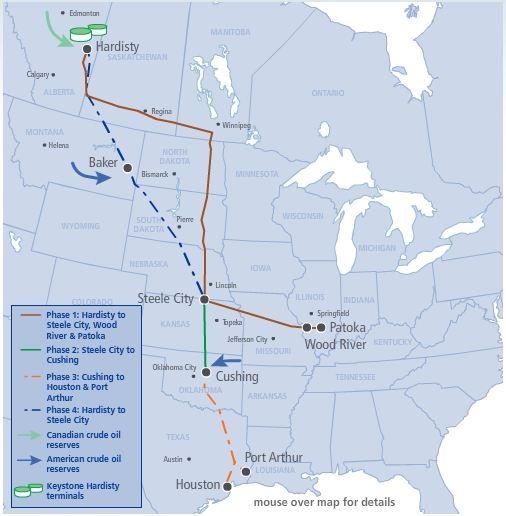 The fourth phase of the project, the new XL line that follows a direct route from Hardisty, Alberta to Steele City, Nebraska, was deep in political debate. The new line doubles the flow that the pipeline network can carry to refineries in Houston and Port Arthur, Texas. An interesting mix of anti-eminent domain and environmental activists are fighting the project. Arguments against the pipeline are many. Farmers bristled at the threatened use of eminent domain by the company to get right-of-way access for the buried pipeline. People in Nebraska are concerned about the risk of contaminating the massive drinking water supply in the important Ogallala Aquifer if the pipeline should leak. The climate-change crowd, fighting against all forms of fossil fuel, call the tar sands oils the dirtiest form of oil.

Fight as they may, oil will flow. It is a matter of when, not if.

For much of my career I have observed supply chains of all kinds. Each commodity supply chain is the same, and different. Process-driven industries have developed complex supply chains over decades that are intricate dances of location, mode and activity. Petroleum production is one of those industries. Given the petroleum industry’s history, I am confident that the oil will flow.

Know the history of the industry, and you will be confident too.

Oil Will Always Flow to a Market

There is an argument that the oil companies will use the pipeline to sell the crude oil to China. The talk about other Canadian pipeline companies attempting to make connections to the Gulf, or westward to the Pacific, bolsters that argument. The decision to sell oil to China from the tar sands is the decision of the Canadian oil companies. Those companies attracted significant investments in development and production. It is a moral and financial malpractice not to seek markets to feed, generating revenue and profits that pay back the debit bonds that financed the development.

The reality is the Canadians do not want to ship the oil to China. They can’t. The biggest investors in the oil sands are the same oil companies that are ready to refine the oil. Those companies want to make a greater profit from the oil. In fact, they have to. To do that, they have to refine the crude into finished product.

In the market today the US is a net exporter of refined products such as gasoline and diesel. The top export of the United States, in dollars, is refined fuel. There is less value in a gallon of crude oil than there is in a gallon of gasoline, diesel fuel, Jet A, or pound plastic. The oil companies really don't want to export the Canadian crude—they want to refine it, because that is how they create more value.

Those refinery jobs are good jobs. So are the related industrial jobs that support the materials used in the refinery process. Those jobs support the local economies where the refineries are. The export of fuels and other petroleum products helps balance the trade deficit and supports the growth of other areas of the Americas. Most of the exported fuels and petroleum products flow to Central and South America, helping other countries in our hemisphere develop and grow stronger.

When you start thinking about those fat profit lines the oil companies make, realize that this profit comes from the value-creation of turning crude oil into refined products.