A friend sent me an article that made an interesting suggestion about Warren Buffett, the Buffett Rule regarding rich, fat-cat taxes, and the Keystone Pipeline.

On August 14, 2011 the New York Times published an op-ed by the Oracle of Omaha entitled, "Stop Coddling the Super-Rich." Buffett argued that the government needed more taxes and the super-rich did not, so the government should increase the tax rate on those Americans making over $1 million per year, and even more for those making over $10 million. A week later, President Obama and Buffett discussed the economy, taxes, and ways to spur growth. A month after Buffett’s editorial appeared, President Obama started to talk about The Buffett Rule.

Four months later, the administration refused to approve permits for the Keystone XL pipeline. While a lot of noise was made about the ecological damage caused by the use of Canadian Tar Sands oil, and accusations were made that the oil would only be exported overseas, the real obstacle to the Keystone was its path across Nebraska, and the Ogallala aquifer. The path across Nebraska did not sit well with the locals. With the support of Mr. Buffett, Nebraskans protested up a storm, claiming that a pipeline leak would damage the vital aquifer.

Railing and Rails – Who Wins? 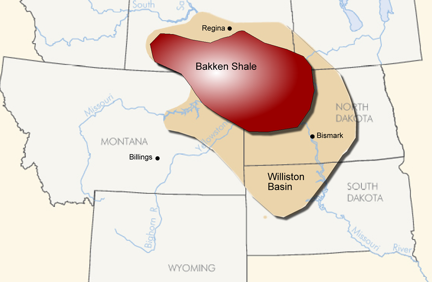 The pipeline did not get approved to cross Nebraska. Construction quietly started on the southern sections connecting Cushing, Oklahoma to the refineries in Houston. While environmental groups and left-leaning groups like Think Progress continued to rail against the Keystone XL, the rails owned by Warren Buffett’s BNSF, Bill Akman’s Canadian Pacific, and publicly-traded Union Pacific rolled in high revenue and high profits.

The oil from the Canadian Tar Sands was only part of the payload for the Keystone XL. The path of the pipeline angled across Montana to cross over the three-point border shared by North Dakota, South Dakota, and Montana, right through the booming oil fields of the Bakken shale and Williston Basin. There are no pipelines serving the key areas where the oil is, and the Baker, Montana Market Link Facility is a key part of the design.

The Keystone is already bringing oil south into the US. The existing line is to the east, outside the Bakken and Williston fields. While there is a market injection point on the current mainline, there is no direct path to move the oil East. 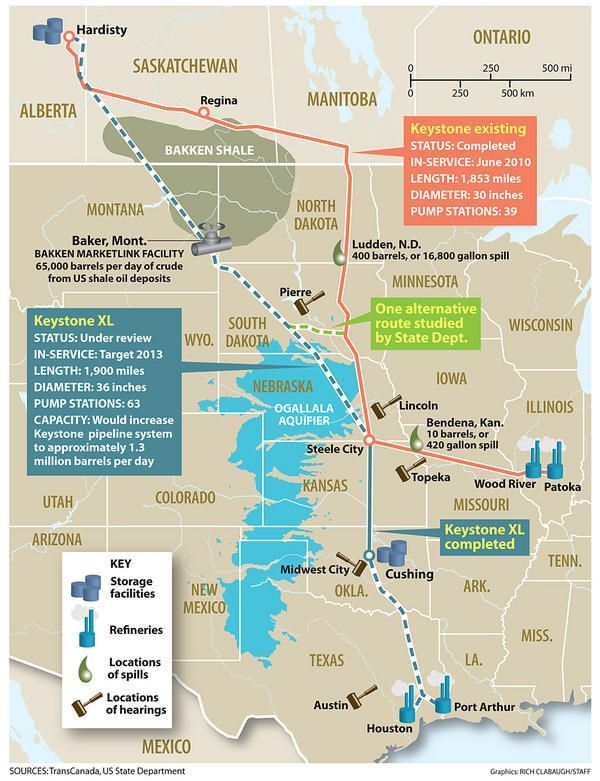 Without the Keystone XL, the only way to get all of the Bakken oil to the refineries would be by rail car. Rail is more expensive than pipelines, about $3–$4 per barrel. And that is if there are rail cars to move it. In 2012, the main rail tank car manufacturers in the US, Greenbrier Companies and American Rail Car Industries, enjoyed an order backlog, and they were making tank cars as quickly as they could. Production at the car plants was at a three-year high. Not bad when you consider that just three years before, there was almost no rail car demand.

While tank car capacity is a challenge, there is other freight for  railroads to haul to the region. Equipment and supplies, like pipe, steel, and fracking sand, is just part of a wave of business that the BNSF, UP, and CP enjoyed in 2012.

Data on railcar deliveries from the American Association of Railroads (AAR) do not break down what comes out of the Bakken and what does not. Still, through June 2012, the rails hauled about 241,000 carloads of crude and petroleum products, compared to 174,000 carloads for the first six months of 2011—almost a 39 percent increase. With an average of 700 barrels of oil per car, railroads hauled 168 million barrels of oil in the first six months of 2012.

BNSF is the largest US crude hauler, transporting more than one-third of the Bakken production alone with 85,000 barrel capacity unit trains. The company reported that crude and petroleum car loadings were up 60 percent through June of 2012. BNSF CEO Matt Rose said that the road was “seeing strong double-digit type growth” in the shale fracking markets. “Everything to do with drilling, horizontal drilling, frack sand, pipe, oil—it’s phenomenal.”

The suggestion:  Buffett and Obama made a deal, a quid pro quo:  Buffett throws his support behind The Buffett Rule, and the administration holds up the Keystone XL permits. Is it true? It makes a nice conspiracy story, one that is very hard to prove. Unless one or the other tells, we will never know.

For some, the suggestion that such a thing could have happened leaves an oily film on the current President and on a respected investor. I am not at all surprised to see the deal sporting a greasy sheen. Of the two parties alleged to be involved, I am not surprised to see one make such a deal; the other I thought had more class than that.

The railroads have a history of crony capitalism going way back. In fact, the Union Pacific, Central Pacific, Southern Pacific, and the Burlington Northern – Santa Fe all owe their mainlines to the lands granted to them by Congress in the nineteenth century, and those were really shady deals. If there really was a deal between Buffett and Obama, it would be nothing compared to some of the deals that have happened in our history.

As a stockholder in Berkshire Hathaway, I am not complaining. In fact, few people are complaining that money is getting made, except for the environmental foamers. The Bakken creates many jobs in North and South Dakota, where unemployment levels are the lowest in the nation. North Dakota has the lowest rate in the country, at 3 percent. Nebraska enjoys the second-lowest rate, and South Dakota comes in third. The unemployment level doubles at the # 10 spot, which is occupied by Virginia, with 5.9 percent.

Even with an operating Keystone XL, railroads would still have boom-time revenues in the region. Moreover, with the influx of commodities needed for the oil extraction activities, like imported fracking sand from China and other areas, supply-chain opportunities for other industries change. As reported in American Shipper, soybean farmers now have opportunities to export their products for higher prices than before. Before the boom, railroads and steamship lines were loath to carry empty containers into the Dakotas.

Until 2005 the strong import economy drove containers into the area. As the bottom dropped out, railroads and ship lines dropped the secondary inland container stops, creating one-way dray distances of over 250 miles. That dynamic is changing, and the BNSF is investing in a new intermodal ramp in Minot, North Dakota to match the one the Canadian Pacific opened in Chippewa Falls, Wisconsin.

Is Rail the Long Term Answer for the Bakken?

Even if the State Department granted the permit for the Keystone XL, it is reasonable to expect that it would take almost two years for the system to be operational. Railroads would still haul a great deal of the production. According to the State Department permit report, rail capacity in the region tripled to 300,000 barrels per day. At 700 barrels per tank car, that is 428 tank cars per day. In the eyes of the State Department analysts, the rails can pump up the number of trains serving the area. The report dismissed the additional $3 in transport cost per barrel vs. pipeline costs as an unlikely differential to slow development of the oil sands.

The State Department looked only at the Canadian oils, not the Bakken sourced fields. They did compare the price difference between the rail effort behind the Dakota oils and the Canadian oils, which may have been an error of ignorance on the analyst’s part. Cured oils differ in both weight and sulfur content. The crude coming out of the Bakken is Dakota Light Sweet, meaning it is lighter in weight and lower in sulfur than what is coming out of Canada. In fact, Dakota Light Sweet is of higher quality than the US benchmark, West Texas Intermediate. Refineries have fewer steps to convert light sweet crude into finished petroleum products, like Ultra Low Sulfur Diesel. Because there is so much of the oil, and transport is limited to just the rails, prices for the semi-refined Canadian product and Dakota Light Sweet dropped like a stone in February 2012, when the markets realized that it would be some time before this oil will find unconstrained transit to Gulf Coast refineries.

Without the Keystone XL, investors in the Bakken fields could be harvesting less return than they do with rail transport. Who gains from that transfer of wealth? While beneficiaries of the flow of oil from under the Dakota plains abound, could one make an argument that the federal government is again choosing winners and losers?