Dodged Bullet:
Trains to the Rescue

In 2012, a number of events had to happen for Northeast Fuel prices to rise above $4.50 for gasoline and $5.00 for diesel. But not all the bad that could have happened did happen. This article is part three in a series that examines the questions that influence pricing:

Transport Changes Where the Crude Comes From

Of all the ways to transport crude oil, pipelines are the most cost-efficient; but they are not the most flexible. The pipeline must exist between the source and the consumption point, and the flow of the oil in the pipeline must move in the right direction.

If you have a pipeline and it does not go where you want it to—flowing from source to demand—then you must consider alternative ways to move the oil from Point A to Point B.

“OK, Dave. We get that. But how does that affect the cost of diesel?”

Oh, such an easy question to answer.

⦁    Barge/Tanker:  These methods are almost as efficient as a pipeline. There are restrictions, however. First, some other form of transportation must be used to get the crude oil from the wellhead to the wharf. Then, there has to be a terminal storage and pumping equipment to transfer the oil onto the vessel. And, barges can only travel in inland waterways—such as rivers—or close to shore. Tankers, however, can move across the open ocean. Finally, if the origin and destination are in the United States, only a US-flagged vessel can carry the oil, thanks to the Jones Act.

⦁    Railroad:  This method is anywhere from two to four times the cost per barrel compared to a pipeline. Terminal facilities are required to load and unload the oil to the tank cars. Some other form of transportation must be used to get the oil to the railroad. Delivery is limited by where the railroad goes, and there is a capacity shortage for tank cars able to carry crude oil.

⦁    Trucks:  These are the backbone of the short haul. Crude oil gets moved from the wellhead to consolidation terminals by tanker truck. Tanker trucks can also move oil to and from transferred terminals. But the cost of tanker trucks becomes rather high when the oil has to move beyond short distances.

In 2012, Class 1 railroads had a better year than they would otherwise have had with the increase of crude oil movement from the Midwest and Plains states to the refineries along the Gulf coast and East Coast. While grain and general carloadings were down, the increase of dedicated crude tanker trains and the movement of equipment and materiel into the oil-producing regions helped make up for the shortfall. The Midwestern drought depressed grain carloadings and shipments of agricultural supplies, but the increases in the oil production regions offset the losses. 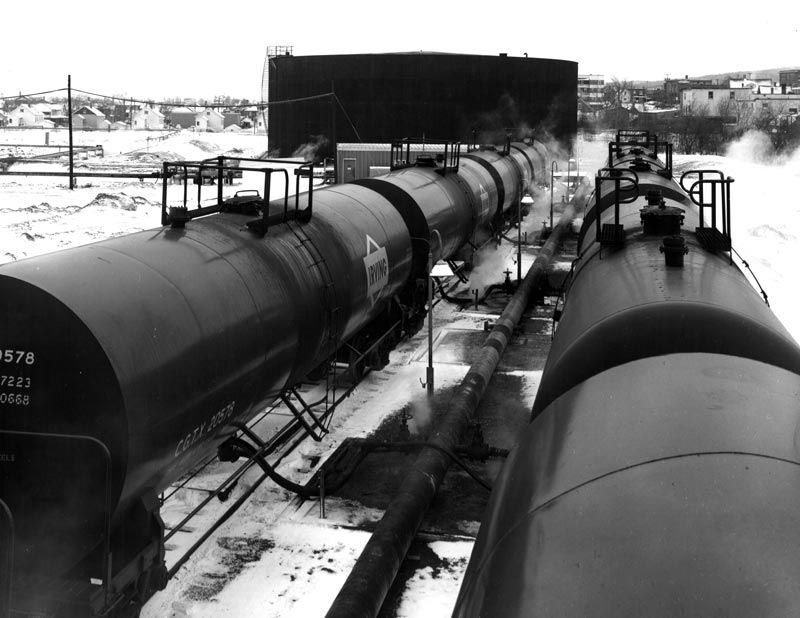 In the first half of 2012 the railroads moved 67,000 more tank cars of oil than they did in the first half of 2011. Almost all of these tank-car loadings originated out of North Dakota, which has become the third-largest oil-producing state. Burlington Northern Santa Fe and other railway companies expanded railroad terminals, a major step in increasing their haul capacity. The major oil hub of Cushing, Oklahoma is also a source point for some of these carloadings, but the real turnaround for Cushing was the increase in pipeline infrastructure which came online by the end of 2012.

East Coast and Gulf Coast refineries are the destinations for these railroad unit trains. In November of 2011, the first unit train of the Bakken Oil Express departed from Dickinson, North Dakota, carrying the first 70,000 barrels of crude oil to  refineries in St. James, Louisiana. When it started operating, Bakken Oil Express had a take away capacity of 100,000 barrels a day, but after a second phase of construction, capacity grew to more than 250,000 barrels a day.

On the destination end of these unit train runs, refineries and rail terminals have to invest to receive the oil. On the East Coast, the PBF energy refinery in Delaware City, Delaware, started to receive 20,000 barrels a day of Western Canadian and Bakken shale crude oil. By September, the offloading capacity grew to 40,000 barrels per day. PBF continued to work on its railcar program, and the Delaware City facility was ready to offload 110,000 barrels per day in January of 2013.

The massive refineries surrounding Port Arthur, Texas started receiving even more railcars of oil in September of 2012. GT Logistics LLC completed the first phase-2 construction of the rail lines around Port Arthur, creating the GT OmniPort to provide railcar storage and trans-loading services. Starting with a capacity of 175,000 barrels a day, the GT OmniPort capacity will grow to over 700,000 barrels a day once the construction is complete. Connecting directly to the extensive network of pipelines serving the Golden Triangle region, this trans-loading port provides ample capacity for the receiving of the Bakken shale oil.

Not to be left out, Delta Airlines' Monroe Energy LLC subsidiary is working on sourcing cheaper domestic Bakken crude oil delivered by rail. Delta expected that refining its own jet fuel would create a $300 million annual benefit, based on sourcing imported oil delivered by tankers. With the steep differential between the price of Bakken sweet crude and the Brent benchmark, Delta could enjoy a greater windfall from vertically integrating the manufacture of jet fuel.

While a number of skeptical market analysts believe that Delta took a wrong turn investing directly into the manufacture of its #1 operating cost item, other airlines like United are now looking at the possibility of following in Delta's tracks. There's a significant crack spread in the pricing of jet fuel. Delta spent a little more than $150 million to purchase the idled Trainer, Pennsylvania refinery from Conoco Phillips. With an expected $300 billion benefit, Delta could recover that investment in as little as six months. Adding in the almost $42 differential in crude oil price between North Dakota Sweet and Brent, Delta could be paying for that plant much faster.

As more rail unit trains start moving North Dakota oil out of the Bakken fields, the price for the North Dakota Sweet oil will increase, approaching and perhaps equaling the price of West Texas intermediate. It will be interesting to see what happens to pricing as more pipelines connect the Bakken and Williston plays to the refineries along the coasts.