Oil, like any commodity, has different prices. Prices vary according to the grade and location of the stock. Oil chemistry plays a huge part in the refining process, and the yield of finished products from a given barrel of crude.

Don’t assume that oil from Saudi Arabia costs the same as oil from Canada. Some knowledge of the world of commodities trading might help dispel this myth. Market price is not necessarily reflected in the deal a large refiner will actually strike with a crude supplier. Long-term contracts between refiners and suppliers often fail to follow the violent swings of the oil commodity market. That is part of the art of hedging.

Today, the United States is a net exporter of refined products such as gasoline and diesel. The country still imports more crude than it produces, which is reflected in the oil import data. When you hear about the amount of crude oil the US imports, you don’t hear about how much leaves as finished product.

A huge part of the profits the oil companies report comes from exported finished petroleum products. There is less value in a gallon of crude oil than there is in a gallon of gasoline, diesel fuel, or Jet A, or in a pound of plastic. The key to refining production profitability is maximizing the utilization of refining capacity. Back during the housing boom, when we drove big SUVs and oil was cheaper, the oil refiners invested in increasing the productivity of their existing plants. As US consumption dropped, the refiners continued to press volume through the process to get their ROI, pushing for higher Return on Assets (ROA).

America’s most valuable export is petroleum products. Other countries do not have the refining capacity or the technology to create fuels as efficiently as our refineries. Refiners in more technologically advanced countries are subject to the same environmental restrictions as refiners in the US. Other countries either do not have the knowledge or lack the investment infrastructure to upgrade their productivity. In many cases, importing the finished product is more economical.

Part of the argument made against the Keystone XL pipeline was that the oil companies would use the pipeline to sell the crude to China. Canada threatened to build a pipeline to the Pacific coast to sell oil to China. The idea is not sound—selling the crude does not make the most profit.

When the US became a net exporter of petroleum, a number of news sources, like USA Today, The Wall Street Journal, and others touted the story. The conventional wisdom is that as US demand for gasoline dropped with the economy, the excess capacity became available for use on the world market. A convenient narrative, but not quite accurate.

When you consider the fat profits the oil companies make, realize that their profits come from value creation—turning crude oil into refined products. The US-based demand is somewhat challenging, but slack demand for gasoline is not the reason why we are now net exporters.

To understand, we must look at the data. The best way is this chart. 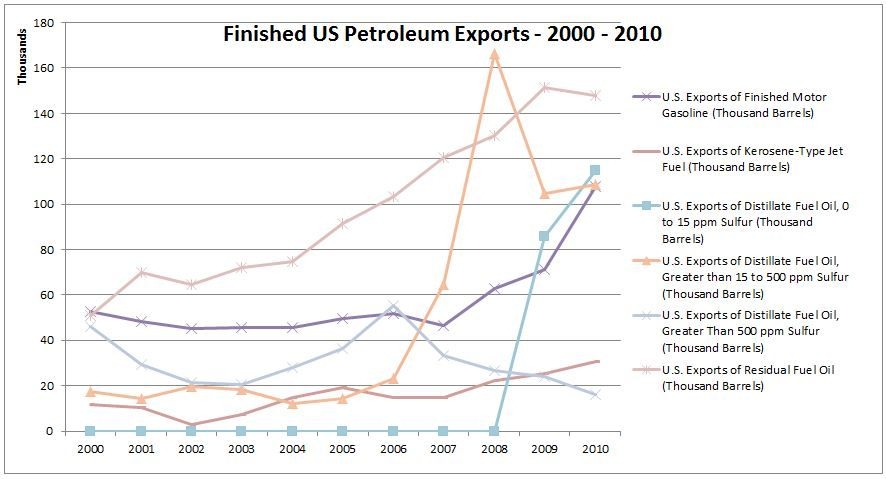 The chart above maps out the total annual exports in thousands of barrels of motor fuel product. While the gasoline number starts to climb in 2007, look at the rapid rate of growth for all of the rest of the lines. Those are different types of distilled products, fuel oils and kerosene, like Jet A fuel. The rest of these fuel oils are so similar in chemical structure that one can substitute for another in a pinch. In fact, any US military vehicle is designed to be able to burn diesel, Jet A, or kerosene.

Look at the chart and identify the longest upward trend. Residential Fuel Oil becomes the single class leader. There is no real difference between Residential Fuel and Diesel, except for the sulfur content and the dye put in diesel to keep trucking companies from burning the road-tax-free residential oils. The fascinating growth trend starts in 2002 and picks up the pace in 2004. It continues to be the gorilla in the room of fuel oils.

Starting in 2008, low-sulfur diesel became mandatory in the US, and US-based refineries started to pump out the new EPA-mandated fuel. Low-sulfur fuel is in demand not only here, but in the EU and Asia, too. US refiners invested faster than refiners in other countries in the process and equipment required to distill and refine low-sulfur fuel. Because of the US position, buying the US product is a better financial solution for the cash-strapped EU than building the capacity to refine their own.

Here is some quick homework to help you understand the refining process. While the movie is old, the processes it describes are essentially the same now as when it was made. The processes have evolved as incremental improvements have been made over the years, squeezing out new ways to break down the complex hydrocarbons. Still, this movie, made by the Ethyl Company, is a great primer to watch if you want to learn the basics.