As I drove back to the DC from the store, I thought about the differences between the ways Jackie ran the Paint department and Steve ran the Tool department. At first blush, I thought that Steve was a better manager — Tools looked so much tighter than Paints. The more I thought about it, however, the more I realized that the differences between the departments were not a reflection of the abilities of the two managers, but a reflection on the decisions made by a different set of managers, the merchandise managers and buyers in the corporate office.

In my mind, from where I worked in the company, the buyers up in “corporate” were a faceless and mysterious group of people. Changes came down from “Mount Corporate” in memos (e-mail did not exist in the 1980s), accompanied by photocopied reports and some typed direction. The greater the distance from the physical address of the corporate office, the more cryptic the messages appeared.

Many of us in the field, the folks working in the stores and distribution centers, wondered how the people in corporate made their decisions. While they clearly had to spend time in the stores, the manner in which new programs came out of the corporate merchandising group did not appear to reflect any store influence.

Store employees and managers in the hinterlands had an emotional impression of people from corporate, whom they would mimic sarcastically: “I’m from corporate, I’m here to help,” in much the same way people mock the Federal Government in Washington DC. I got the impression from the people I worked with, and from the store management teams, that everyone held a low opinion of the people from the corporate office.

We had a team of three buyers in our DC who talked about decisions made by corporate. Some were smart, many were dumb, and a few were stupid. Our buyers did not make major merchandising decisions; they managed local regional product lines and maintained the local inventory in the DC. We on the DC staff had a somewhat cordial relationship with these buyers. We turned to them when we had vendor problems, and they helped us understand and manage new vendor information. I gathered that these local merchandise managers sometimes questioned the wisdom dispatched from corporate.

Both the stores and the DC felt the impact of the decisions made at corporate. From my viewpoint, and from the viewpoint of the department managers in the stores, it did not appear that the corporate buyers understood the impact of their decisions. I thought about that as I pulled into the DC parking lot. The difference I had seen at the store between the Paint and Tool departments made me question that viewpoint. The new tool program showed that the buyer must have thought about challenges at the stores.

Differing Versions of the Same Goal

After checking in with the DC receiving crew to see if any mayhem had happened in my absence, I rolled into Tom’s office to talk about what I’d learned at the store. I shared with him the stark difference between the Paint and Tool departments, and the chaos I saw in the Store Receiving Room.

“Before the new Tool program rolled out, you got a report that outlined what product we were getting and how much to distribute in the initial push to the stores,” I said. “Where did that come from?”

“The better question is, who gave it to me?” Tom replied. “Patty is the seasonal and tool rebuyer for our DC, so I figured she had to have the inside skinny on what was going on. I asked her what the plan was, and she gave me a copy of the report.”

I thought about that for a moment. Patty was one of the three buyers who worked in the district office that was part of our DC. She sat about 30 feet from Tom’s office. She had not volunteered the plan; Tom had taken the action to ask for it.

“It didn’t occur to her that we might want to get a copy of the plan when she got it?”

Tom smiled. “Dave, you are expecting too much thinking out of a buyer. Actually, when I talked to her, she said that she received the report the day before. She already had made a copy of the plan, which she said she was going to give to me later in the day.” Tom, like many of us in the DC, had a sarcastic streak. Of the buyers in our district, Patty was the best at communicating plans for what she managed.

“You gave me that plan just as the first vendors started to schedule delivery, “ I said. “Did you give that report to me the same day?”

Again, Tom smiled. “You came in about 20 minutes after she gave it to me. I’d planned on going over it with you that afternoon, but you beat me to the punch.”

“Tom, I am new here at the DC,” I said. “But I’ve spent enough time in the stores to know how things work. What I saw in the Paint department is SNAFU, as in ‘Situation Normal.’ What I saw in Tools was wonderful and not normal. Remember, I ran a store hardware department, and the vendor direct products were always a problem. You were out of the stuff that sold well, had too much of the stuff that did not sell, and not enough on the order to meet minimum. Somebody really thought through the problems at store level with this tool program.”

“I like that we have the shipment volume,” said Tom. “We are shipping more products without any additional expenses.”

“Not so fast Tom,” I said. “We are now starting to get the replenishment orders in and the labor to receive and put away those orders is hurting us. Part of the reason I went to the store was to see if I could pick up any ideas on how to make the receiving process better. I did not learn anything that makes our process better, so I am back to the drawing board.”

By this point, Tom’s smile had disappeared. In his mind, problems led to more expense, and more expense led to a smaller bonus. We kicked around a few ideas, but came up with nothing that made sense to either of us.

The Reason Behind the Reason

I went back to my office to catch up on some paperwork before going back onto the floor. I kept wondering whether any of this really meant anything, and to whom. 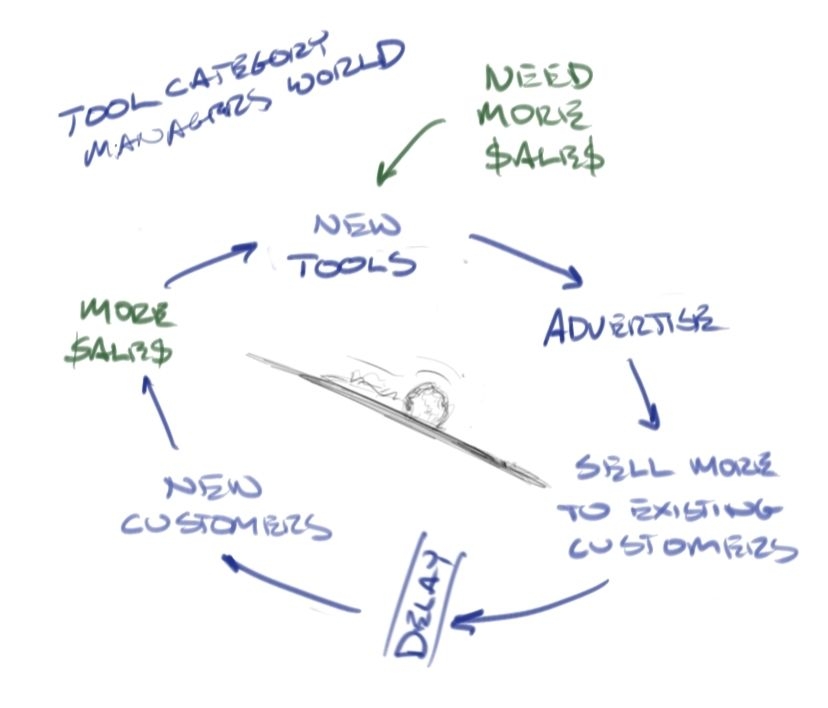 To sell more stuff, our current customers bought more of what we carried. We could put the stuff we already carried on sale (lowering the margin), advertise the sale (which would cost more money), and sell more stuff. There was a problem with that approach. What if I put it on sale and sold the same amount of stuff? We made fewer margin dollars with more expense for the advertising. That would not make me a bonus.

Then I thought about the downside. I did not know how the new stuff would sell. I would have to guess what to carry and how much to carry. The more new items I carried, the more excitement I could create, increasing sales. More items meant more inventories, which meant more working capital.

What happens if my working capital is limited?