The systems loops that I have been sharing in this Systems Thinking series are examples of balanced systems. The goal of these systems is balance among the various conditions and influences. 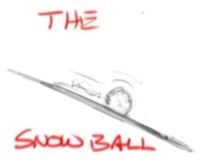 There is another type of system:  The Reinforcing or Amplifying Feedback Loop. I call this kind of system The Snowball. Imagine a snow-covered hillside. Up at the top of the hill you make a snowball and start rolling it down the snow-covered slope. As the snowball rolls it picks up more snow, gaining weight. At some point, it gets easy to roll. Then, a few feet later, it starts to roll on its own, picking up speed as it rolls down the hill. If it is a long hill you may not be able to stop the ball from rolling, and picking up more mass.

Lets go back to the snow-covered hill. The snowball starts rolling down the hill. You notice that it is not as round as you want it to be, so you push it to the left and it starts gathering more snow. As it picks up speed, you press your hands on the top, creating friction, and slowing it down. Each time you touch the snowball, you are applying a balancing system to it, adjusting the amplification loop and controlling how it forms.

All systems consist of these two kinds of feedback loops. Using these loops we can define what happens in just about any system of action — in nature, in human actions, and in business. Let’s look at another example in warehouse operations to illustrate.

Let’s return to when I was a young receiving manager to illustrate how the snowball and the balance loops work. 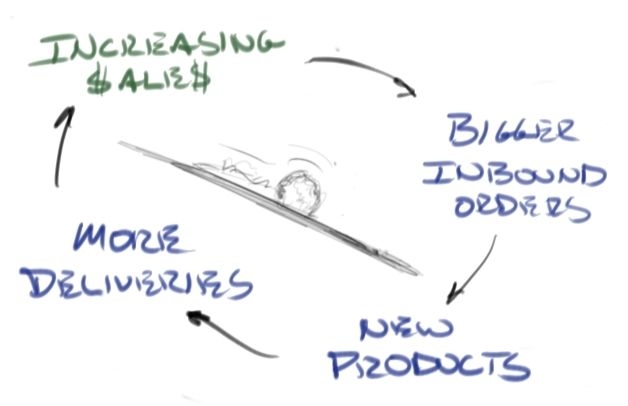 With the sales growing, other parts of the company felt the pressure to grow as well. In my job as a warehouse supervisor, I felt the pressure in the dock and the warehouse. Three observations told me that the business was growing:

Each of these three noticeable increases created a different set of problems. As a new supervisor, new to the role and new to the warehouse, I did not really think about the growth for the first few months. It was all new to me, and I assumed the growth was normal. I quickly learned, however, from listening to the people that I led, that the growth was unusual. The growth was creating problems that the warehouse workers did not know how to fix. I knew from listening to my DC Manager that our DC would see significant growth in volume and SKUs carried. The warehouse team did not know what to do, so our productivity decreased.

I had just sat down with my lunch when one of the guys came in from the warehouse to tell me that they had run out of space for the toilets. I couldn’t believe it was true. We had been out of stock on the “promotional potty” for almost a week, so the floor location for the tanks and the bowls had been empty. The dedicated space was the right size for a full truckload.

Toilets come in two parts — one bowl and one tank. The purchase orders always had an equal quantity of each part. We typically saw forty-foot piggy-back trailers, where 342 bowls accounted for ¾ of the trailer and the 342 tanks made up the rest of the space. The bowls took almost three times as much space as a tank. The factory floor stacked the bowls into the trailer first, followed by the tanks, stuffing the trailers tight from floor to ceiling and wall-to-wall.

The trailers that the promo potties came in could hold 2,560 cubic feet of air. The toilets took up almost all of that space, cubing out at 2,342 cubic feet. Unloading and palletizing the toilets exploded the space the toilets used. The typical pallet used about 6 ½ cubic feet of space. The problem was the bowls, which did not stack well on standard pallets. Looking at them from the end, the box was a trapezoid shape to make better use of the trailer space.

At almost 30 inches in length, and 20 inches across the wide side of the box, the bowl cartons hung over the pallets. At best we could get a total of 24 bowls on a pallet, with significant overhang. While we could stack two pallets in a floor position, the overhang meant the pallets chewed through more floor stack space. The tanks fit nicely on the pallets, and could stack four high with no problem.

A forty-foot trailer created 14 pallets of bowls and 17 pallets of tanks. But the bowls took up over twice the space of the tanks because of the overhang. A load of toilets consumed four rows of floor storage — three for bowls and one for tanks. And that is exactly how much space we set aside – four rows.

Now that was not enough space.

Not Just the Promo Potties

After checking the ti-hi on the toilet bowl pallets to validate that we had 24 units per pallet, I looked at the paperwork. The load total was 500 sets, not 342. It looked about right; we had seven extra pallets of bowls. I counted the tanks — 24 pallets, in a space where we could fit 24, so that was not a problem. Still, the bowls overflowed.

We did not have any more floor space for the extra toilet bowls. I looked around in the building and saw that we did have some space in the racks. Improvising, I told the guys to pull the tanks out of the floor stack row, stuff the extra bowels in the row, fill the rest of the row with tanks, and put the extra tanks away into the empty pallet rack locations. Putting the tanks in the rack added extra effort for replenishment, but we ran out of options, and this was better than leaving the overflow of tanks or bowls in the aisles.

I walked over to the trailer and looked inside. This was a 45 foot long trailer, 102 feet wide and 110 inches in height. Total space on this trailer was 3,825 cubic feet. I scribbled some math on the paperwork; 500 toilets X 6.85 cubic feet per set totaled 3,425 cubic feet of toilets. As I looked in the trailer I realized they could have fit another 50 sets in the trailer if they had tried.

I understood what was happening. To meet the increased sales and to improve the margin, the buyers were ordering larger shipments. Each of these shipments were on piggy-back trailers, and I knew that the transportation cost for a 45-footer was about the same as on a 40-footer. Getting more freight on the trailer lowered the cost and improved the margin.

Three surprises in a week. I looked around the warehouse to see what I could do about space. As I walked, I looked at the products that we got in on rail trailers. There were a lot of them. I counted the products and calculated how much more space we needed if all of the loads for these products grew by 12 percent. It was not good. We needed an additional 300 pallets of space.

That was a problem. We did not have another 300 pallets of space.