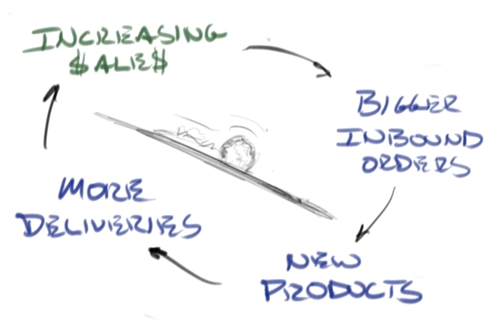 We Have a Problem

Part of our daily appointment process included printing out the WMS-generated receiver form. We used the paper receiver for the floor data collection, and it was the tool the clerks used to enter the receiving data into the system.

The receiver provided all the information the receiving dock crew needed to process an inbound load. Listing every item on the purchase order, the receiver form also provided the SKU data, including the product ti-hi, the case quantity, and the pick location. The receiving crew used the information to palletize the inbound merchandise, to make the pallet ID labels, and for stocking small quantities to the pick.

Following our routine, one afternoon I sat with the appointment schedule looking over the deliveries booked for the next day. On the schedule was Willig Trick Lines delivering four pallets from a vendor I did not recognize. Looking at the items on the order, I could tell that the product was for tools. There were only 10 line items on the order.

I still did not recognize the vendor, so I figured I could go look at the merchandise in the warehouse to see what it was. I looked over to the right-hand side of the receiver where I would find the pick locations and discovered the form was blank. No pick locations. I turned to the WMS terminal and punched in the item number for the first SKU; no information about the item.

In the six weeks I had worked at the DC I had not run into this before. I picked up my papers and went to see my boss, Tom, the DC Manager.

“We have a problem,” I announced as I walked into his office. “I have a delivery tomorrow for a vendor I don’t recognize. The receiver has no picks for the product. I go to find the vendor in the inventory and I can’t find it.”

Without saying a word, Tom held out his hand for the paperwork. He looked at the receiver, and then punched the keys for about 15 seconds. Looking at the screen he said, “hmmmm,” and then poked some more keys.

“It’s a new vendor,” he said. “You looked at the Item Inventory Inquire screen. Nothing will show up because we never had the stuff. You needed to look at the Item Master Screen.”

I looked over his shoulder and made a mental note. I felt a little stupid, not thinking to look at the Item Master. Then I started thinking about what I had to do before the delivery arrived.

“Sounds like you know what to do,” said Tom. “Good thing it is only 10 items. You can get that done this afternoon before the product arrives.”

“Is there a way to know in advance when we have a new vendor coming?” I asked.

“Nope,” exclaimed Tom with a smile. “We didn’t know until it arrived. Now we know the day before, thanks to the receiving appointments.” 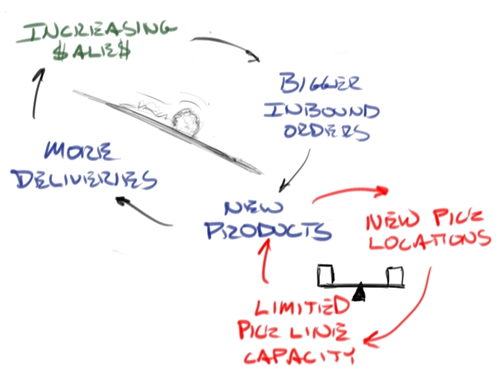 New Products Out the Wazoo

That vendor with the 10 SKUs of pliers was the first of over 40 new vendors that came in over the next month. The tool department doubled in size. It started as a trickle with that first vendor, and then another in the first week and three more in the second week.

I let Tom know each time a new vendor appeared on the receiving appointment book. Each time Tom asked if we had the space. Each time I said I would find the space. It was okay for the first few vendors — until the SKIL Tools order arrived.

We carried SKIL Tools, so the order did not catch my eye until I looked at the PO. We carried 12 SKUs. There were over 40 lines on the PO. None of the lines had a pick location. Reading the descriptions and looking at the quantity on order, these were big boxes and big quantities. I looked back at the appointment book — 34 pallets.

It took me less than a minute to move from my desk out in the warehouse up to Tom’s in the front office. “Tom,” I said, “I need help.”

“Stop the flood!” I told Tom about the SKIL Tools order, the 40-plus new SKUs arriving on 34 pallets in the morning. “There are table saws on this order, big boxes. There are chop saws, again big boxes. I don’t know where I am going to put this stuff!”

I had not worked for Tom long enough to have learned to read his expressions. As he took a long drag on his cigarette, he smiled at me and said, “I have good news and I have bad news. Which would you like to hear first?”

He did not let me answer. “I can now tell you all of the new vendors and new items we’re going to get! It is over 200 SKUs! That’s the good news!”

I stood for a minute, thinking about how I was going to deal with 200 new SKUs.

“The bad news is that all the new SKUs either arrive this week or next week!”

I know my jaw dropped. I know I let out a huge sigh, because this was the first of many times that Tom would make fun of my sigh.

“There is light at the end of this tunnel!” Tom said, after he mocked my sigh. “This new stuff is going out just as fast as it comes in!”