Our receiving process was simple and methodical. We unloaded the freight, did a carton count, and inspected for damage. If the load was good, we signed the freight bill and sent the driver on his way. For a small LTL load, the total time the driver was on the property was under 20 minutes.

The next step took the most time and the most space. We broke the pallets down, sorting the product by SKU onto pallets. It was easy to process large quantities of a single SKU because we didn’t have to touch the cartons; just count the cartons on the pallet, slap a pallet tag on it, tally the quantity on the receiver report, and put the pallets away.

Mixed SKU pallets took more time. We broke those pallets down and sorted them onto pallets by SKU. For much of the merchandise that came in on mixed pallets, one inbound pallet created at least two pallets, and seldom more than five pallets. Two vendors shipped 75 – 100 SKUs across two to three pallets, and one vendor shipped mixed pallets that averaged about 10 SKUs.

The new tool vendors bumped that average up. The tool department change added almost 1,000 SKUs to our inventory assortment. Most of the new SKUS were small accessories, blades, bits, and wheels. Over 45 SKUs of pliers added to the seven SKUs we originally carried. We now had over 50 SKUs of hammers from three vendors. Chalk lines, plumb bobs, screwdrivers, wrenches, squares, utility knives, tape measures — the lists and names were almost endless. The expanded assortment sold for the most part. No fast movers, but even activity across all the SKUs.

All these new vendors clogged our inbound process. A single pallet of 50 SKUs could take more labor hours to process than a container of ceiling fans or a trailer of toilets. The process labor time was just one problem; the dock congestion choked us and caused bigger problems throughout the DC. Most of the inbound tool department product stocked directly to the pick location, so we could mingle SKUs on a pallet. Still, those orders piled up pallets on the dock, closing off space and tying up resources.

Decisions made outside our warehouse changed our world inside the warehouse. New elements of work emerged with the changes. The stores depended on our warehouse to perform effectively. What we did affected the stores. If we did not get product received and stocked as planned, we could hurt the sales in the stores. Did this change our purpose, our identity?

I decided to go to one of the stores to see the new tool program. I wanted to see what we could do to improve our delivery service to the stores. More important, I wanted to learn whether the new program was actually increasing sales. In going to the store, I was leaving the boundary of my distribution center and going into the world of my customer. 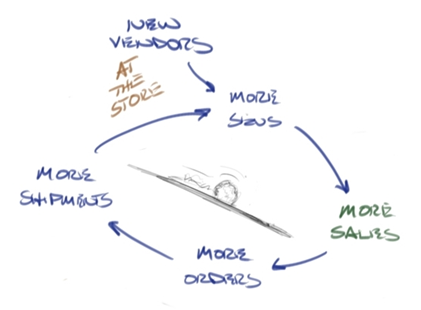 The store manager was happy to see me when I showed up early, before the store opened. As we walked over to the tool department, he told me how hard it was to keep in stock.

First, I noticed a lot more SKUS than what we carried. There were vendors that I did not recognize, and vendors that I knew from our recent activity. Looking at the product lines we carried, the stock looked good — the peg hooks were full and in stock. There were still significant empty spots in the display.

Some of the empty space was for new vendors yet to arrive. The manager remarked that a few vendors had not shipped the new product. He said, however, that most of the empty peg hooks were product that had sold out, for which they were waiting for new shipments.

“Sales are way up in tools, so the program is working,” said the manager. “We sell more hardware, plumbing, and electrical items too, now that we have the tools.” I figured that there had to be a sales increase in some other departments. “We could be selling more if we were in stock on more of the vendor-direct product.”

I walked back to the receiving room as the manager left to get the store ready to open. This store had received its DC order two days before, so I did not expect to see much product in receiving.

That turned out not to be a good assumption to make.

There was no room in the receiving room.

I edged past the door and made my way past pallets of freight, to the receiving desk. The receiving manager looked up at me in frustration. About 14 wrapped pallets of inbound merchandise filled the small area.

“Are you here to help me receive this?” the receiving manager implored.

“No, I came to find out what problems the DC orders give you,” I replied. “But it looks like this is not a good time.” 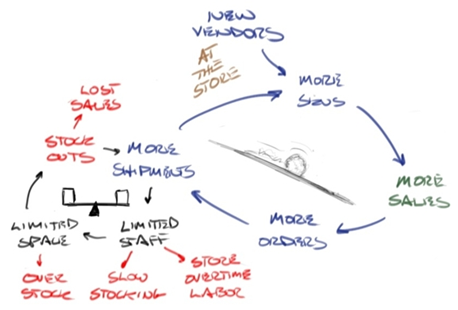 “Now is as good as any,” she said. “Once I get the door opened and we get this mess that Yellow Freight delivered late yesterday moved out into the yard.”

As she spoke, the rollup door lifted, and a forklift operator started to pull pallets out of the room, making space. I walked around and looked for pallets that had been shipped from the DC, but did not see any.

“It really helps that all the tools come on the same pallet. We break it down onto three carts and wheel it out onto the floor to stock,” she said. “My real problem is all the new paint items we get in from direct ship vendors.”

I was aware of the tool department changes because we saw the change in the DC. Other departments, like paint and plumbing, were going through the same expansion.

“I don’t get the hit from plumbing, since toilets, sinks, and tubs go to the yard warehouses,” said the receiving manager. “But the paint department is killing us. All of that new product is arriving vendor direct, and we just don’t have the space on the shelf for what we order.”

I thanked the manager for her time and got out of her hair. I first looked at the inbound pallets of paint, brushes, scrapers, and other paint sundries. Paint made up most of the pallets I saw as I walked around.

I went back inside and into the paint department. Just like the tool department, the paint department had transformed, bulking out into more space. The selection of paints exploded. Not only new quality grades, but new vendors for primers, spackles, fillers, and special paints. The shelves all looked full. I looked carefully and saw that the store associates had front-faced the shelves the night before to make them look full.

Walking back to the receiving room, I turned into the backstock storage area. The paint area overflowed. I walked back and looked at each backstock aisle, finding paint in the plumbing area, the hardware area, and in the tool aisle. Turning and walking back I noticed something else — backstock aisles filled with department product and paint, except for the tool aisle.

The tool aisle had almost no tools, but lots of paint.