As I worked through the rest of the day, I kept thinking about the differences I had seen that morning between the Paint and Tool departments. It was clear to me that how the merchandise category managers planned their assortments was only part of the puzzle. I could see a clear difference between the way one merchant set up the Paint Program and the way another merchant set up the Tool Program. They did not do it the same way, and that confused me.

It was the end of the week. On Fridays, some of the folks from the district office gathered at a local watering hole for happy hour. Since I was the last manager out of the building on Friday, I often left the DC after happy hour, so I rarely stopped in. Today was different. We finished the day early and I got out of the DC early. Driving past the little roadhouse, I decided to turn in and have a beer before driving the last mile to my apartment.

The roadhouse was not crowded, and when the folks from the office saw me walk in, they called me over to join them and drink some of the pitcher of beer they’d just ordered. It looked like the whole local buyer staff was there, having a good time. I took a chair next to Patty and accepted a glass of cold beer.

I was new to the DC, and did not know these people very well. They were nice, and they were having fun talking about their kids and joking about various things. As I sat and drank my beer, my mind drifted back to what I had seen at the store that morning. I was lost in thought when in the background I heard someone call my name, followed by a punch in the arm.

“Are you one of those guys that has one beer and drifts off into space?”

It was Patty. She had a big smile on her face, and she was holding the pitcher and pointing to my empty beer glass.

“Oh, sorry,” I croaked. “Yes please, I will have another beer. Perhaps that will help me stop thinking about what I saw at the store this morning.”

As Patty poured my beer, she asked about what I had seen. Before long I was replaying what I saw in the receiving room, and in the Paint and Tool departments. The more I talked about it, the more Patty and two of the other buyers, Rick and Paul, paid attention. And they asked questions.

“I don’t know why the two programs are so different, but they are,” I said. “I am surprised by the difference. The way Tools is set up is so different from the Paint and Hardware departments.”

"That’s not it, Rick,” said Patty. “All the vendors are greedy about getting as much of a category mix as they can, no mater the merchandise department.”

Paul spoke up. He was the senior buyer at our DC. “It is much more than that. Making changes to a category or adding a new category is hard to do for a number of reasons. The manager faces a number of dueling goals that can shape the way the deals come together.”

“And it is hard to know all the parts until you are deep into the process and have already made a number of supplier commitments,” added Patty. 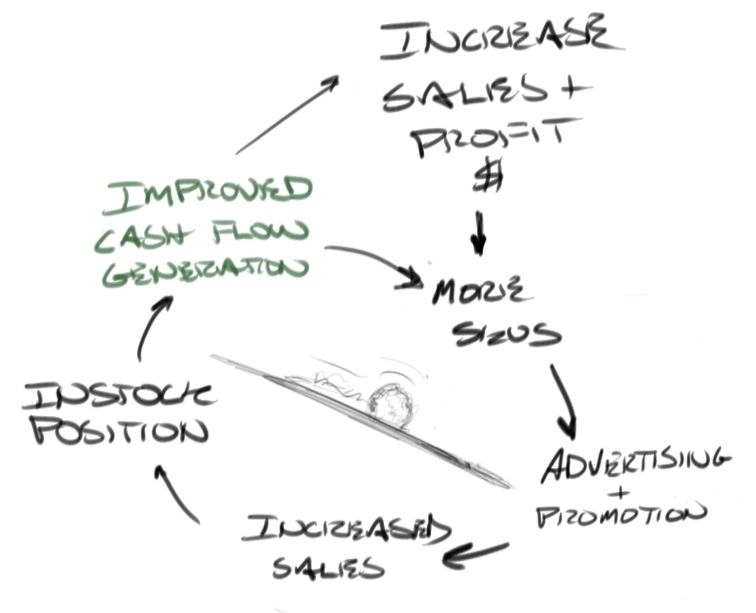 “Look at the thought behind the new tool program,” Patty continued. “Not only was department revenue down, but the profit margin dollars was down harder. The category manager needed to increase the profit margin on what the company sold.”

Patty said the company hired a new Department Merchandise manager for Tools, and that manager brought in new category managers. They looked at the department and decided that we did not stock the right tools, and we did not have the selection that our customers wanted, or the products the non-customers wanted.

“The new program has more than twice the SKUs of the old program,” Patty said. “Many of the new SKUs are higher quality, so they are higher value per unit. The prices of the SKUs are higher in the new categories that we never carried before, more than doubling inventory dollars in the tool department.”

“Growing the breadth of a department in one move is risky,” Paul chimed in. “The idea is that the new products are going to bring in new customers. But you’ve got to promote and advertise that you have all of these new items, and that costs money. Sales are going to increase, but you never really know how much, or what items.”

“In the beginning you are guessing how well something is going to sell,” added Patty. “And no product line is going to have uniform sales across all the SKUs in the line. Some items will be leaders, and other items will be dogs, dogs that you have to carry if you are going to keep the customer.”

“The vendor can give you guidance on what the sales profile is for an established line,” said Rick. “But if the product is really new, they’ll be guessing just as much as you are. Or worse, they could be telling you how they hope it will work out.”

“There is a real danger that running out of stock on a new program can hurt the growth of the program,” added Paul. “Customers will forgive you for being out of stock for a very brief time, or on a few items, if the stock-out is brief. But if you are out across most of the line, and other retailers carry the product, you will lose the customer because of the customer’s perception that you really don’t support the product.”

My beer glass was empty, and so was the pitcher. But my head was still swirling, trying to absorb what I had seen at the store and what the buyers were telling me.

“So with a new program, you should just stock up heavy and watch what sells, giving yourself time to see how demand plays out,” I said.

Paul looked at me, and then at the empty pitcher. “That is a simple answer. And that is what buyers used to do. But that does not work anymore, because there is not an endless bucket of money for inventory.”

“Tell you what, Dave,” Paul continued. “You buy the next pitcher of beer and we will tell you about managing inventory.”

As I walked up to the bar to buy the next pitcher, I wondered how much of Paul’s proposition was just a ploy to get me to buy a round. As I paid the bartender, I figured that a pitcher of beer was a small investment to make, and a small price to pay to hear about the buyers’ problems.