Driving With the Rearview Mirror: Looking Ahead, Not Behind

I would not use the word "fun" to describe the morning meetings I talked about in the previous article.

Claude sat in his usual spot, a Styrofoam cup of coffee in his hand and a clipboard on his lap. With a cigarette hanging from his mouth, he totaled up some numbers by hand with his #2 pencil. I leaned on the lateral file cabinet along the other wall, working the figures on my tally sheet. Sherri came in, posted the numbers on the board, and took her spot.

Tom lit up a cigarette and looked at the board for a minute.

“What happened to the labor number, Dave?”

Answers. I learned to have answers. The first week was hell, until I started to look at the actual hours used by each department, the size of the orders, and the receiving activity. It took a few weeks for me to get my arms around where the labor effort really was, and where the labor dollars really were.

“It did not move. I think I know where we have our issues. The dock is where our problems are,” I said. “We have loading overtime because Lauren is FILO, and we are getting too many late deliveries in receiving.”

Tom looked at me for a moment, “FIDO? What do you mean Lauren is FIDO? He works like a dog but you should not call him one.”

Everyone got a good laugh out of that. “FILO—First In and Last Out. Lauren is our highest paid guy, first on the clock and often the last on the clock.”

I smiled at Sherri after she was done. One of the things I did to figure out the hours everyone was working, was do a tally sheet at the end of each day, which I left on her desk after plotting the hours worked by employee on graphs. The Daily Hours Worked tally saved her at least 30 minutes of effort in getting the payroll numbers done. Now, she just had to multiply the hours by each person’s pay rate and run a total. My effort went a long way to getting Sherri to help me get some of the other measurements done.

“I don’t want to touch Lauren’s hours yet,” I said. “I haven’t spent enough time to figure out what we can do. "

"Sure thing," I replied. "There are many other places where we have overtime, so I want to focus on them first. Like Receiving, I know that the late in the day deliveries cost us at least a hundred bucks a day.”

Tom let out a long whistle. “A hundred a day? That is a long way to getting your numbers down. How will you fix it?”

“It feels like we are always looking behind us,” I said. “Like we are driving forward, but only with the rear view mirror to see where we have been, not forward to where we are going. I want a way to look ahead and see what is supposed to come tomorrow. I also want a way to stop the deliveries after 2:00 PM.”

Our receiving hours ran from 6:00 AM to 2:00 PM. Summertime in Arizona was not fun in that tin box of a warehouse, so we wanted to see deliveries in the morning. It never failed that at least one truck would show up right before 2:00 PM, ensuring at least three hours of overtime between the dock and the put-away crew.

“How do you propose to stop the late arrivals?” asked Claude. The warehouse had been his domain before I arrived, though he had spent little time managing the place when it was his to manage.

“It isn’t just the late arrivals,” I replied. “We have problems with the big SKU POs that arrive after lunch. When we get one of those in and a late arrival we get really hosed. What I am thinking of is an appointment book.” 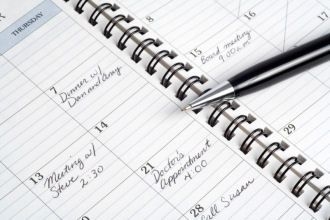 Tom and Sherri looked at me quizzically. “When you go to the dentist or the doctor, you have to make an appointment,” I explained. “I want to do the same thing with the receiving dock. Carriers have to call by 2:00 PM the day before to secure an appointment for delivery.”

A smile started to spread across Tom’s face. “That way the dock does not get overloaded, you can control how many loads show up at a time?”

“Not only that!” I was just warming up. “We get the pallet count, and the PO number for the delivery. That way we know how much time to book for the load, and the clerks can pull the PO paperwork before the truck shows up.”

Sherri started to chime in. “Carol and Steph spend a lot of time looking for POs that are not printed. This way they can make sure all of the paperwork is ready to go before the trucks arrive.”

“The last appointment block would be 1:00 PM. We would book starting in the morning. If a carrier calls and wants an afternoon appointment, we would suggest a morning time, and try to get them in early while it is still cool,” I said. “That way, if all of the loads get done by noon, we can send most of the receiving crew home, except for those doing stocking.”

Tom grinned. “I like it! This gives you the forward vision you are wanting. OK, so I get it. Now, what do you have to do to get it started?”

I presented the whole plan the next morning. Tom got our area DC director on the phone to get support back in the corporate office for the program.

It took a week to get everything in place. I created a new set of delivery receiving rules for the DC. We ordered two outdoor signs, one for the gate and one for the exterior wall next to the receiving doors. We took the same rules and created a single page flyer to give to each of the carriers. We contacted each of our buyers and let them know what we were doing. We asked for the purchase orders to have special instructions about the receiving appointments printed on the POs. I set up an appointment book in the receiving office. Finally, we got all of our internal processes spelled out and the staff trained.

We started rolling out the plan the next week. Within a month, almost all of the carriers were making appointments, and the crazy late afternoons stopped. Our overtime hours in receiving disappeared. In fact, the average weekly hours per person on the receiving team dropped to 36.

Driving With the Rearview Mirror: The Second Monday