A few years ago, a colleague spoke about the need to hire a specific person because they possessed domain knowledge. The situation involved managing a temperature-controlled fleet that made multiple stops to deliver and pick up freight. This colleague had a specific profile in mind, someone who currently managed a delivery fleet for a wholesale food service operator.

I challenged this thinking, not because I thought it was wrong, but to get my colleague to think more deeply about the needs of the operation. What else would this manager need to be able to do? What additional skills did the client need the manager to possess? As we discussed the client’s situation, the importance of domain knowledge shifted. In the end, we started looking for someone who knew some accounting and had general business skills and strong organizational skills and communication skills. The manager the client eventually hired had all of this, but no previous experience in wholesale food service. That manager proved to be a star performer.

The worst managers I've met in the course of my career were people with excellent technical skills whose companies had promoted into management positions. I don’t blame these managers for being bad managers; I blame the managers who promoted them to their level of incompetence.

In a Hierarchy, Every Employee Tends to Rise to His Level of Incompetence 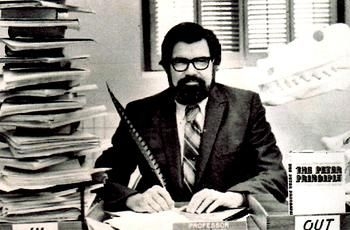 Dr. Laurence J. Peter wrote about this in his 1969 book, "The Peter Principle." The book is about incompetence. Dr. Peter was a teacher, a research professor who thought long and hard about how people rose to positions above their competence levels. These people meant well, but their habitual bungling frustrated their coworkers and eroded the efficiency and effectiveness of their organizations.

Peter first presented his principle in 1960 to a group of directors of federally funded educational research projects. Some of the men in this group were competent researchers, but now they had been promoted to program directors — a position at which they were incompetent. As he became aware of their plans to spend time and taxpayer money on rediscovery of the wheel, Peter decided to explain their problem by introducing The Peter Principle. The group responded with a mix of hostility and laughter.

In his book, Peter is sharp and funny with his observations. He continued to give small lectures about his principle until 1963, when he explained to author Raymond Hull how a once-competent actor in a bad play had become an incompetent actor-director-producer. Hull convinced Dr. Peter to do more than merely present his lectures to small groups, advising him to bring The Peter Principle to the masses in book form. Peter demurred, citing the principle itself and his own writing ability. The two of them solved the problem by collaborating: Hull wrote the manuscript, and the pair started to submit it to publishers in 1965. Publisher after publisher rejected the book, confused about whether it was a comedy or a serious scientific work. So Peter and Hull found an alternative way to spread the word — through the magazines of the day, including Esquire and West Magazine. After receiving a tremendous response from readers, Dr. Peter became very busy writing follow-up articles and giving lectures on the principle.

Interest in Dr. Peter and his principle grew until book publisher William Morrow, who understood the demand for Peter’s observations and the money it could make, published the book. Released in 1969, the book was the number-one non-fiction bestseller for 20 weeks, and it stayed on the bestseller list for over a year. Translated into more than 15 languages, the book became required reading on college campuses; it was the subject of many lecture classes and inspired several serious research projects to validate the principle.

Perhaps the strongest point in Dr. Peter’s work rests on the notion of promotion. Why do we feel the need to promote competent people into positions in which they are incompetent to perform? Is promotion a reward mechanism? If so, it is a clever way to debilitate an organization.

My point is that domain experience is vitally important, but you must define the domain of the position. A great truck driver may not make a good dispatcher, although that is the career path for many incompetent dispatchers. A great staff accountant may not make a good comptroller — again, the career path of many incompetent comptrollers. As we promote people to higher levels of responsibility, the skill requirements change. The skills required for the higher levels are different from the skills needed at the lower levels; the difference lies in the task execution levels. Managers need management skills, and promoting someone without those skills is malpractice.

As the responsibility of the job increases, the domain expands.

Such was the case of my client in the beginning of this story. The company made a significant investment in systems to help improve the routing and performance of the delivery fleet. They were poised for significant growth, and fleet operations were a major constraint to that growth. The company needed to add dispatch capacity, promoting route drivers into dispatchers. The new dispatchers did not trust the software, and the solutions did not make sense to them; as former drivers, they thought in terms of how they would want to run the route as a driver, rather than about the best application of people and equipment.

As the business grew, revenue increased, as did expenses. There was a problem, however:  expenses were growing at a faster rate than revenue, and soon the company was making almost no profit. Overtime was rampant. The fleet grew quickly, adding trucks and drivers — drivers who made almost 50% more per day than the warehouse personnel. The routes did not work, and trucks were dispatched late and half-filled. Deliveries arrived late, short, damaged, or a combination of all three.

One of my first observations was that there were too many trucks for the current business. The company could park almost a third of its fleet and still cover everything that needed to be covered. As I watched the dispatchers in action, I learned that most did not use the routing system, depending on spreadsheets and handwritten route plans. Turning my focus upward, it became clear that the operation manager did not have the bandwidth to supervise the dispatchers. The size of the operation had grown so much, that the once competent operations manager had become incompetent to cover the warehouse and the delivery fleet.

I recommended hiring a transportation manager or a fleet manager. The senior managers started talking about hiring somebody who had worked at a wholesale foodservice company in a fleet management function. They wanted domain knowledge. After interviewing the candidates, I told the client not to consider any of them because they lacked the domain knowledge the company needed.

It took some effort to convince the executives that the guy with the finance degree was the right guy, but after three months, almost $100,000 in expense reductions, and a drop in overtime, the executives understood the power of hiring someone with the right domain knowledge.