This issue of rail cars and the rotting wheat in 1979 got me thinking about capacity constraints in the current rail networks. My research shows that currently there are three different freight-car capacity supply issues in the US. 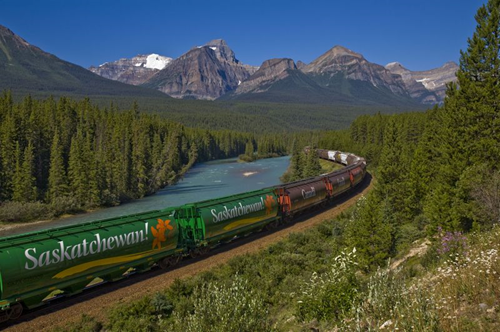 As chairman of the Senate’s Commerce, Science, and Transportation Committee, Rockefeller for years sought to increase the authority of the STB. The STB is one of the few vestiges of railroad regulation remaining since the Interstate Commerce Commission was shut down in the Reagan era. Captive rail shippers like farmers, coal companies, and chemical plants turn to the STB for mediation of rate and service issues. Rockefeller continues to view railroad managers in the same light as the Robber Barons of the nineteenth century (like his great-great grandfather) and not as capital-investment intensive enterprises.

Funny what can happen in three years. While pipelines still are the dominant method for moving both crude and petroleum products, rail is growing at an exponential rate. When it takes billions of invested caplital and years to clear regulatory hurdles to build a new pipeline, millions invested in tank cars and transfer terminals starts to look like chump change.

People are a bit worried about the safety of crude oil transport by rail. The July 2013 wreck that incinerated the center of Lac-Mégantic, Quebec is the most memorable of a series of derailments in the last year. During the course of that year, as CBR shipments have increased, so have derailments. Since March 2013, according to our research, there have been at least 12 derailments of trains carrying crude on North American Railroads. Of these dozen derailments, only three captured national attention.

From the response of the media — like a report from one Chicago news station, and the panic on the web sites of various environmental groups — you might get the impression that the US Federal government is turning a blind eye to the unsafe transport of Crude By Rail.

Of the different modes of transportation, only the railroads have the ownership of the right-of-way. The railroads own the ground, the ballast, the track and the signals that make up a modern railroad. We see the hardware of rolling stock and locomotives, a combination of private investment by both the carriers and the shippers. What we don’t see is the ongoing investment and operating cost of the mandated signals systems, like the Rail Safety Improvement Act of 2008 (RSIA).

The mandated systems employ positive train control (PTC), an advanced technology that automatically stops or slows a train when it detects the risk of train-to-train collisions, excessive speed derailments and unauthorized train movements in repair areas or misaligned track switches. RSIA requires Class I railroads to install PTC on tracks that carry passengers or toxic-by-inhalation (TIH) materials by the end of 2015.