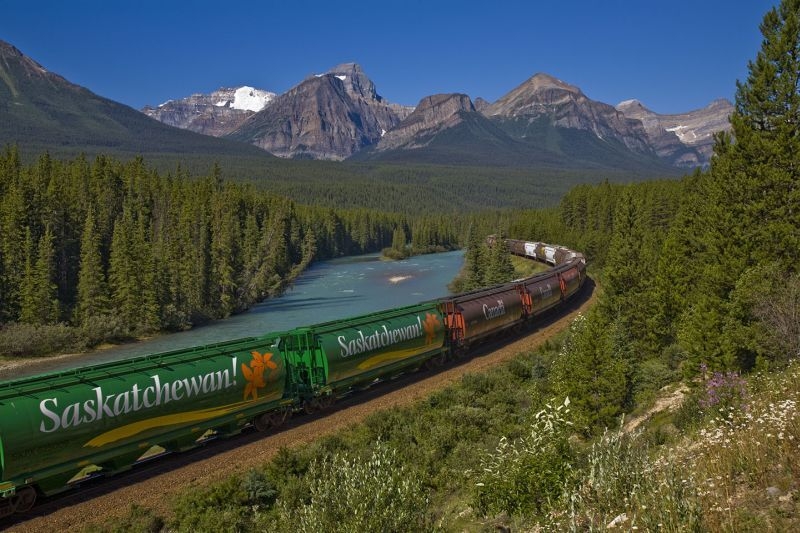 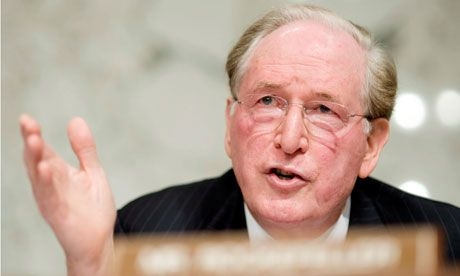 As chairman of the Senate’s Commerce, Science, and Transportation Committee, Rockefeller for years sought to increase the authority of the STB. The STB is one of the few vestiges of railroad regulation remaining since the Interstate Commerce Commission was shut down in the Reagan era. Captive rail shippers like farmers, coal companies, and chemical plants turn to the STB for mediation of rate and service issues. Rockefeller continues to view railroad managers in the same light as the robber barons of the nineteenth century (like his great-great grandfather) and not as capital-investment intensive enterprises.

Meanwhile, in Fargo, North Dakota, the furious pace of oil exploration creates a crisis for farmers whose grain shipments sit, waiting for capacity consumed by the movement of oil by rail. The backlog builds as farmers harvest a record crop of wheat and soybeans in the northern prairie states, adding grain shipment pressure to the existing bumper crop of corn.

“If we can’t get this stuff out soon, a lot of it is simply going to go on the ground and rot,” said Bill Hejl, who grows soybeans, wheat, and sugar beets in the town of Casselton, about 20 miles west of Fargo. Casselton was a hot spot of oil activity this winter when a crude-by-rail (CBR) unit train on the BNSF derailed, with part of its contents exploding into flames. Farmers, commodity brokers, and food manufacturers all worry that the limited grain-hauling capacity in the plains states will lead to millions of dollars in agricultural losses and slower production for breakfast cereal giants like General Mills.

Long the backbone of North Dakota’s transportation system, railroads provide the most dependable bulk shipment capacity for farmers to move grain to ports in Portland, Seattle, and Vancouver. From those ports, the US grains flow across the Pacific to Asian consumers. That dependable capacity is under strain, and the railroads are reporting record grain-shipment backlogs. BNSF reported on August 22 a backlog of 1,336 rail cars waiting to ship grain, while Canadian Pacific reported a backlog of more than 1,000 cars. 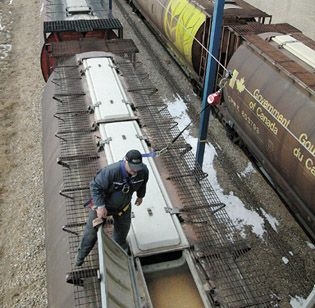 If the railroad can’t get the grain hopper to the silos for loading, and then in motion to the destination, the delay could mean canceled orders from the food manufacturing giants that must have a steady supply of grain to make cereal, bread, and pasta. Farmers who lose orders panic and seek another market for their crop, and capacity to ship it.

“I’m losing money, and my customers are turning to other sources as a result,” said Mr. Hejl. “I don’t know how much longer we can survive like this.”

Federal Agriculture Department officials voiced concern that Canadian Pacific could not fulfill nearly 30,000 requests from farmers and others for rail cars before October. The backlogs on the CP and the BNSF prompted North Dakota’s congressional delegation, along with lawmakers from Minnesota, South Dakota, and West Virginia, to pressure the Surface Transportation Board to step up pressure on the railroads.

“The inability of farmers to get these grains to market is not only a problem for agriculture, but for companies that produce cereals, breads, and other goods,” said Senator Heidi Heitkamp, (D-ND). At the senator’s request, North Dakota State University conducted a study of rail congestion. In that work, they estimated that farmers in North Dakota could lose as much as $160 million because they could not command higher prices due to the local oversupply of grain caused by the limited capacity. The study claims that farmers could lose $67 million in revenue from wheat, corn, and soybeans from January to mid-April, and $95 million more in expected losses if farmers are unable to move their remaining inventory of crops. The study was conducted before the predicted record crop of 273 million bushels of wheat, so the final real cost could be much higher.

It is not just the farmers who are feeling the bite of capacity-driven losses. General Mills, maker of Cheerios, announced that in the quarter ending February, it lost 62 days of production, about 4 percent of total output, because of winter logistics problems, including rail-car congestion. Cargill reports a drop in net earnings due to “higher costs related to rail-car shortages.”

Record crops have challenged the railroads in the past, both for grain car capacity and capacity to run the needed trains. In the past, farmers and agriculture groups complained about the backlogs, making the claim that the railroads favored more lucrative freight, like import containers and coal from the Powder River Basin. Now the culprit is crude oil out of the Bakken oil range of North Dakota.

Rail capacity into and out of the area is challenged. Trains of sand, steel, and other building materials flow into the region, while 100-car CBR unit trains run outbound. The railroads are closed-loop systems, meaning the cars that come in filled with fracking sand leave empty, and the CBR unit trains that leave filled return empty to continue the cycle.

Prior to 2008, Bakken oil production was almost non-existent. Since then, the prodigious production of the range has challenged the capacity of any of the available methods for moving crude. Without major take-away pipelines like the US portion of the northern Keystone EX, the only way for crude to flow is by truck or rail. With over a million barrels of oil flowing both east and west via rail (the inbound materials shipments and the outbound grain shipments), capacity is more than tight — it is troubled.

Farmers claim that the railroads favor moving the CBR trains over the grain shipments. The two major railroads in the region, the BNSF and the CP, both maintain that oil is not replacing grain in the capacity mix. As BNSF executive chairman Matthew Rose said, “We aren’t favoring one type of product over another. Of course, the big difference in what we are shipping these days is oil.”

Over on the Canadian Pacific side, the railroad reports struggling with “phantom requests,” where a farmer orders more cars than he needs, taking up capacity needed by other farmers in the same area. The issue is so bad, CP’s CEO, Hunter Harrison, argued in a letter to Congresswoman Heitkamp that most of the current service delays are due to unused cars captured on sidings waiting to be loaded — extras that a farmer ordered but did not use. This led a North Dakota official to say “With CP, it’s everybody’s fault but theirs.”

More business than you have the capacity to take. Sounds like a good problem to have.

Ever See a Locomotive Get Painted?