A few weeks ago, my family gave me an old copy of Newsweek magazine. Old, as in 33 years old, from August 6, 1979. They picked it up because of the cover art, a color drawing of Teddy Roosevelt leading the charge up San Juan Hill. We had fun looking through the old magazine. The high count of cigarette ads surprised the girls. I was surprised at how many of the automobile ads did not use photographs, depending on black and white artist sketches of the cars. 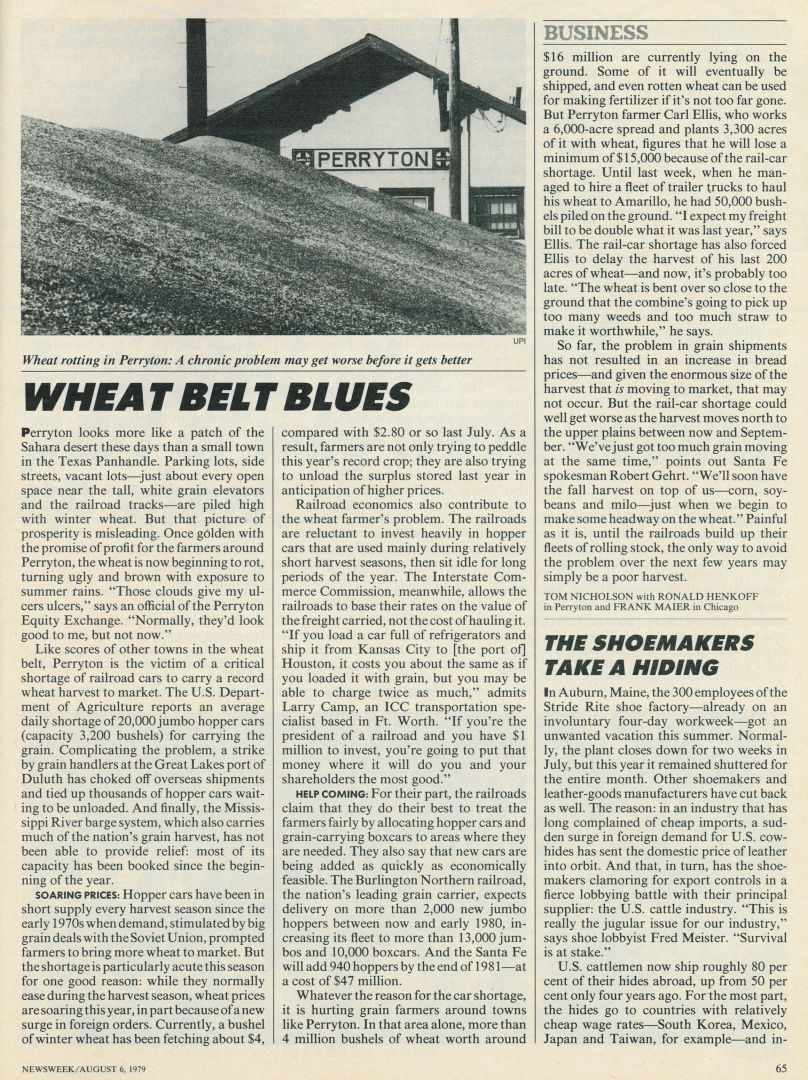 The stories in many ways highlighted how the news of our times today echos what we faced in 1979. Jimmy Carter was in office. The country was wandering through a sluggish post-recession economy with high unemployment, industry under siege from imports, high energy and food costs, and dissatisfaction with the direction of the country. Political polarization is evident in the text of the articles. Iran is a huge foreign policy problem. In addition, Paul Volker “towers over most of the financial community” as the newly appointed chairman of the Federal Reserve.

Leafing through the old and yellowed pages brought me to a story that caught my eye, Wheat Belt Blues. (Read the story by clicking on the image). At first I thought it would be about the effects of a summer drought on the wheat crop, and then I remembered that 1979 was not a drought year, 1980 was, followed by 1983.

The photo of piles of rotting wheat in Perryton, Texas highlighted a different shortage, a shortage of railcars to carry the bumper harvest to market.

At the time I read this story I was researching data for an article about how the railroads are another benefactor of oil production in the Bakken Shale and Williston Basins of the Dakotas. There are no large pipelines to carry the crude from the Bakken fields to the refineries along the gulf coast. With the current administration’s rejection of the Keystone XL pipeline, the railroads are double benefactors, both in the transportation of the materials needed to produce the oil and the transportation of the crude to market.

Any transportation network has constraints. In the current pipeline network, the constraints lie in the direction of the pipelines and what products the pipes can carry. With the current drought, the Mississippi River is a constraint, as there is not enough water in the river to support barge traffic. In trucking, the constraints of the highway systems and the availability of equipment and drivers are giving truckers better pricing.

In the case of railroads, the network of rails is a constraint. But this is nothing compared to the lack of the right kinds of railcars to move the cargo. The shortage of railcars in 1979 created a situation in which, in a time of high global demand and high market prices, over $1 billion of bumper-crop wheat harvest never made it to market.

In 1979, the heavily regulated railroads owned most of the freight railcars used to move cargo around. Railroads are capital-intensive operations, and at the time the capital supported track, motive power (locomotives), control systems, and rolling stock (railcars). Class 1 railroads owned over 1.2 million freight cars in 1979. Freight cars have long lives—over 20 years of expected life for a typical car—so the car’s age will determine its value. Still, data suggests that the Class 1 railroads freight car fleet represented over $30 billion in investment.

Since freight cars represent a significant capital investment, railroads could be stingy with the investment capital. In fact, in the 1960s and 1970s, under the pressures of regulation of the Interstate Commerce commission, the railroads had to be stingy just to survive. The 1960s and 1970s marked a time where most Class 1 railroads operated in deep pools of red ink. In 1976 the federal government consolidated the bankrupted Northeastern railroads of the Penn Central, Erie Lackawanna, Lehigh Valley, Reading, Central of New Jersey and Lehigh and Hudson into Conrail. Other cash-starved railroads throughout the country looked to financial ways out of the pricing constrictions of regulation and competition from trucking and barge services.

The 1980 Staggers Act helped lift some pressure off the industry. The grain car shortage of 1979 proved to be one of the agents of change that helped bring change to the rail industry.

Just as a flatbed trailer is not the right equipment to carry frozen vegetables across the country, an open top hopper car is not the right freight car to carry wheat. The cash-strapped railroads did not want to invest in a fleet of General Grain Service to carry bumper crops of grain. Demand for grain hoppers proved to be very seasonal in the 1970s, spiking by 50 percent for the six to eight weeks of harvest, and then dropping for the remainder of the year. Winter and spring traffic dropped to about half the volume of the peak season, when cars would transport grains from storage silos and elevators to mills and factory processors. Winter brought the sight of long sidings lined up with empty grain cars waiting for the next harvest.

While boxcars can be pressed into grain service, the condition of most boxcars in the 1970s really made that use impossible. Most of the boxcar fleet of the 1970s consisted of 30-year old equipment with bent frames and doors, and punctured walls from years of hard service.

This picture did not change until investors saw a market and began to create networks of freight car leasing companies to provide the capacity needed to move the nation’s growing production. You can make the point that outside investment in the rolling stock helped the railroads—and the US economy—as much as deregulation did.

The chart above shows the reported US fleet of freight cars in service in 2012. The older cars, 30-plus years in age, represent about 23 percent of the total fleet of cars. You can see where freight cars over 30 years old are retired, with the sharp drop in car counts for cars over 40 years old. Notice what happened between the 1970s—the column listing cars over 30 years old—and the 1980s, the column listing cars 21 to 30 years of age. Before the Staggers Act, the railroads owned most of the fleet, but after the Staggers Act, ownership in total swung sharply over to private ownership. Most pronounced is the cliff-like drop of covered hoppers by the railroads and the extreme climb by private owners.

Deregulation opened the door to this swing, creating the opportunity for investors to invest capital into a railroad asset with less risk. A rail car will make money, even if it sitting. Investing in the rest of the railroad assets was a much riskier venture in the 1980s and 1990s. A railcar can be in demand in a wide market of geographic locations, but where a track physically sits limits the revenue it creates; a railcar is a mobile revenue generator, able to travel over any railroad to the demand.

As demand for a product or service goes up, smart money invests in helping meet that demand. Investors have options. Investors seeking big growth will invest in what is in demand, and investors seeking steady income will invest in what helps deliver the demand. Consider two different trend changes in the freight car chart—covered hoppers and open hoppers—and the investment stories behind those trends. 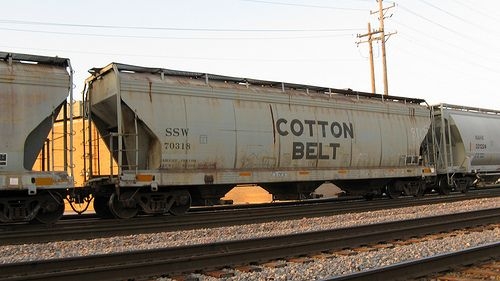 As the population of the US grew, and the strength of US agriculture grew, so did the demands for the bulk movement of fertilizers to grow grains, and the capacity to haul the harvest of the grains. 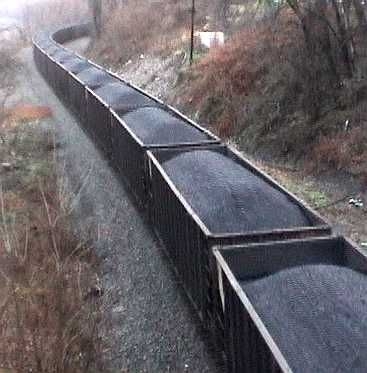 Private ownership of open hopper cars started to see growth in the 1990s as US electrical power demands grew, and coal-fired power plants started to tap coal from the Powder River Basin of Montana. Powder River Basin (PRB) coal produces less energy per pound (8,500 btu/lb) than eastern coal (average 12,500 btu/lb), so there was limited demand for it until new Clean Air and Water standards in the US called for lower sulfur dioxide emissions. Switching to the lower sulfur content Powder River coal saved the average power plant $219 per ton of sulfur removed.

Over 80 unit open hopper trains depart each day to feed 35 power plants that burn PRB coal. Unit trains vary in length from 100–150 cars. Depending on the length of haul to the power plant, a single power plant could require as many as 10 trains to keep it fed. Our research indicates that there are at least 12,000 open hopper cars in PRB service today. Expand that count to all the other unit hopper trains in service to the power industry, and the population is massive.