People are a bit worried about the safety of crude oil transport by rail. The July 2013 wreck that incinerated the center of Lac-Mégantic, Quebec is the most memorable of a series of derailments in the last year. During the course of that year, as CBR shipments increased, so did derailments. Since March 2013, according to our research, there have been at least 12 derailments of trains carrying crude on North American Railroads. Of these dozen derailments, only three captured national attention.

As a short review, the Lac-Mégantic derailment happened on the Montreal, Maine, and Atlantic Railroad (MM&A), a short-line railroad built in the 1880s that is the final link serving a refinery in St. Johns, New Brunswick, Canada. The MM&A is one of many short-line railroads running small rail lines that once were part of a major railroad. When the majors want to shut down a line, they sell it to a short-line operator, which is in some cases a company set up by one of its major customers that depend on that line for service. This was the case with MM&A, a railroad short on track and short on the cash necessary to keep the railroad running.

The MM&A tracks had deteriorated so much that most of the distance on the line was speed-restricted to about 10 MPH. The locomotives were in poor shape. To reduce costs, MM&A operated single-crew trains, operated only by an engineer.

At 11:00 PM on July 5, 2013, MM&A2 — a train with five locomotives, a VB car, a buffer car, and 72 DOT-111 tankers, each holding 30,000 US Gallons of Bakken Crude — arrived in Nantes, Quebec for a crew change. The engineer parked the train on the main line, since the siding was in use, shutting all but the lead locomotive down, and setting the hand brakes on the locomotives and 10 of the 72 tanker cars. The engineer left the unlocked lead locomotive running to maintain the air pressure to the air brakes. The engineer then left the train by taxi to spend the night in a hotel in Lac-Mégantic.

Around 11:50 PM, the Nantes Fire Department and the local police were dispatched in response to a report of a locomotive on fire. They shut off the locomotive and put out the fire, alerting the MM&A controllers. Two MM&A maintenance workers arrived just after Midnight, and after inspecting the train, reported to the police officer and the controllers that the train was secure.

At about 1:00 AM on July 6, the train started rolling on its own down the seven-mile descending grade to Lac-Mégantic. Eighteen minutes later the train arrived into Lac-Mégantic, sparks flying from partly applied brakes, at approximately 60 MPH, on tracks speed-rated for 10 MPH. As the train entered the curve and grade crossing in the center of town, 63 cars derailed, stacking up like sausages. Some tank cars burst open, spreading the volatile crude oil, which ignited, likely from the superheated wheels and brakes on the first 10 cars. 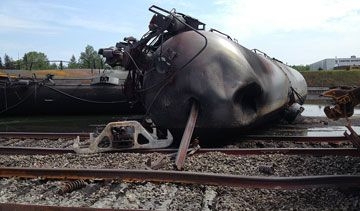 The resulting fire started to consume the oil, heating oil in tank cars that did not split open, causing them to rupture in BLEVE (Boiling Liquid Expanding Vapor Explosion). The burning liquids ran into storm sewers and flowed under the streets to spread the fire through the downtown area, while the BLEVE cars shattered windows and spread burning oil through the air, igniting other tank cars and buildings.

Forty-seven people died. The destroyed center of town is still off limits until what is left of buildings and the grounds have been decontaminated from the oil that did not burn.

The explosive nature of the fire surprised many who did not expect crude to burn with such violence. But crude-oil fires were not rare in oil drilling operations of the past, and it often happened that a combination of crude and the flammable gasses inside it would ignite violently. The Lac-Mégantic derailment demonstrated that the crude coming out of the ground in North Dakota may be more volatile than most crudes.

Short on Maintenance, Process and Cash

Cynical thinkers might say that the MM&A was a short-line railroad in more ways than just the distance of track; it was short on cash, short on maintenance, and short on safe operating process.

Or was it? The mainline may have seen better days, but just because the MM&A was a short line does not necessarily mean that it operated on poorly maintained tracks. Take a look at this video below. This is actual MM&A video taken on May 3, 2013, of locomotives and trains much like like the ones that roared down the hill on that July night.

While it is impossible to tell for certain by looking at videos of what the tracks looked like on the MM&A as it rolled through Lac-Mégantic before the accident, this video does not appear to depict a poorly maintained line (for an idea of what that looks like, see the video at the bottom of this article). However, we can see what the actual line looked like as it snaked through Lac-Mégantic. We can see what the line and the equipment looked like more than 20 years ago in this video clip from the early 1990s, when the line was still part of Class I Canadian Pacific’s operations. If you want to see what the grade from Nantes to Lac-Mégantic looks like, start the video at 26:56 where a train is passing Nantes, and watch through 28:42, when the train passes the future site of the derailment.

Operating speed is one important factor in transportation safety. If you go too fast, you will wreck. Would MM&A #2 have wrecked under normal operations, with an engineer parked in his seat? I doubt it. If the speed limit was 10 MPH through town, then the engineer probably would have operated at 10 MPH.

One recent development in CBR operations is voluntary changes made by the railroads that are members of the American Association of Railroads (AAR) to slow CBR unit trains down. In February 2014, the AAR and the US Department of Transportation (DOT), agreed on a number of safety procedures that built on safety enhancements many rail operators already had implemented on their own.

The major railroads in the United States and Canada agreed to designate trains carrying 20 or more tank cars of crude or ethanol as "key trains." This designation, also used for trains carrying explosive, toxic, and nuclear materials, gives CBR trains priority over all other traffic and sets a maximum speed of 50 miles per hour. The railroads also agreed to requirements for comprehensive risk assessment and route-planning procedures.

The railroads are stepping up track inspections of CBR routes, looking for cracked or broken rails, one of the most common causes of derailments, and are deploying enhanced inspections that go beyond current standards set by the Federal Railroad Administration (FRA). These high-tech measurements of track geometry — such as curvature and alignment, rail ultrasound inspection, and other efforts — should demonstrate that rail operators are working to avoid accidents.

Slowing down is a major step that still needs to be taken. It is amazing to watch how well trains can work on what looks like unusable track. These two videos show how much speed has to do with railroad safety. This one is from a Canadian Pacific line in Ontario. Notice the sway. This train is moving at 20 MPH. It looks bad, but the train stays on the track.

This video is from a short line in Minnesota that gets abused by the weather, and unloved by the railroad. Look how slow the train has to go, and how bad the track is.

Ever See a Locomotive Get Painted?