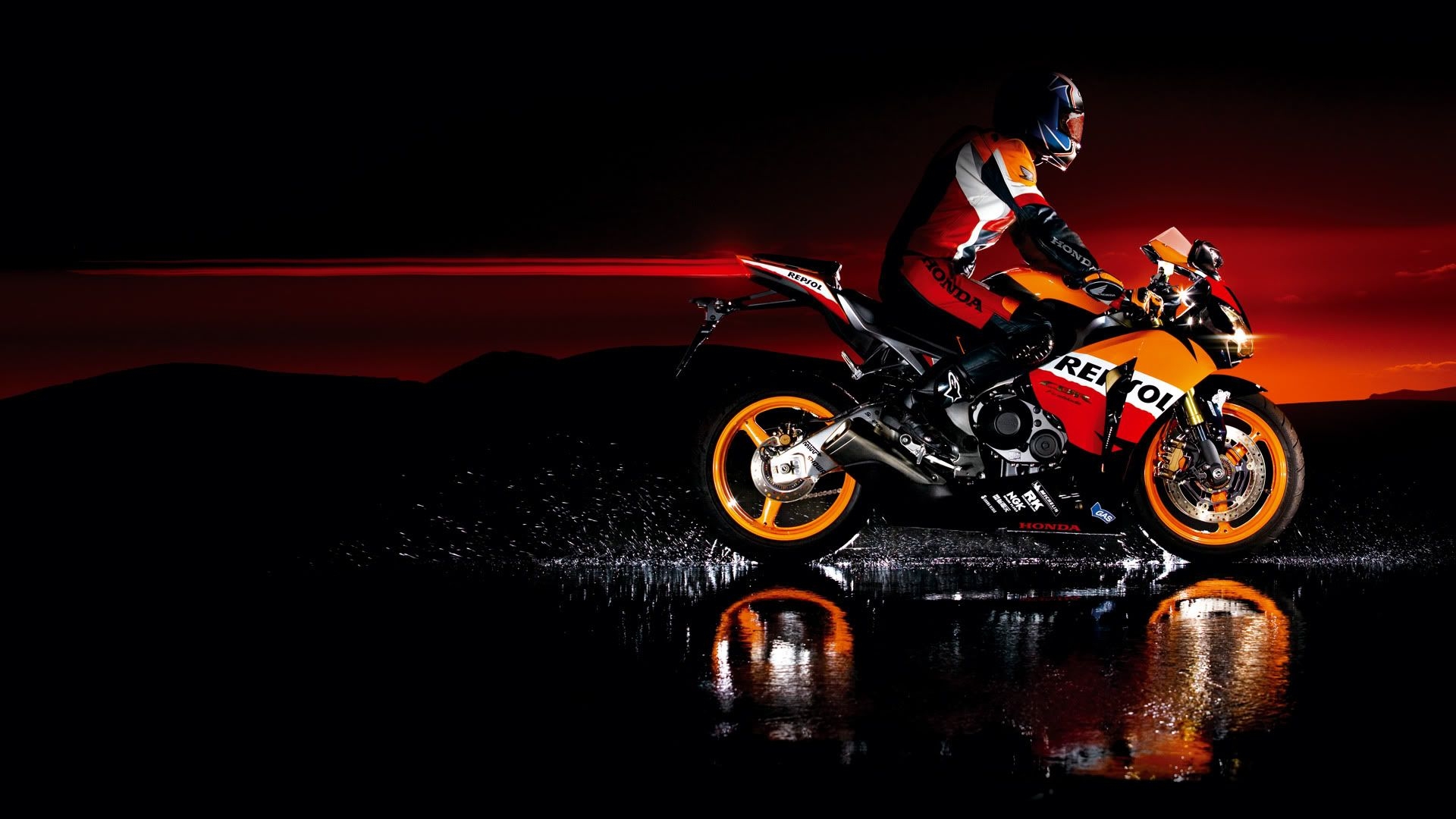 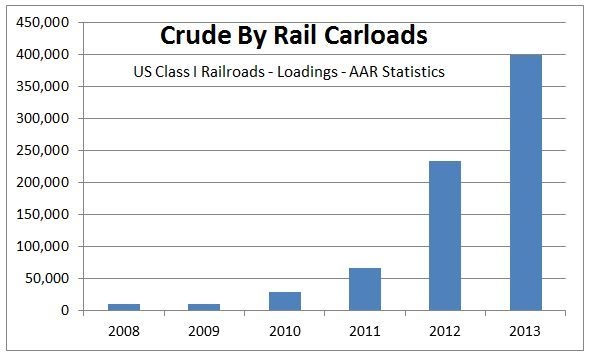 Funny what can happen in three years. While pipelines still are the dominant method for moving both crude and petroleum products, rail is growing at an exponential rate. When it takes billions of invested capital and years to clear regulatory hurdles to build a new pipeline, millions invested in tank cars and transfer terminals starts to look like chump change.

The railroads have not missed out, nor have refineries on either US coast looking for a way to get cheaper and higher quality crude for their refineries. Rail car manufacturers are booked out making DOT-111 compliant tank cars. Railroads are building more transfer terminals in the oil fields, as the refiners build transfer terminals to feed their facilities.

Infrastructure of the Last Century

The US is now producing more oil than the largest of the OPEC nations. Fracking has opened up development of the Bakken and Williston basins of the Dakotas, and other fields, like the Eagle Ford in Texas. These new developments are unconventional plays in places where no oil transportation infrastructure has ever existed. 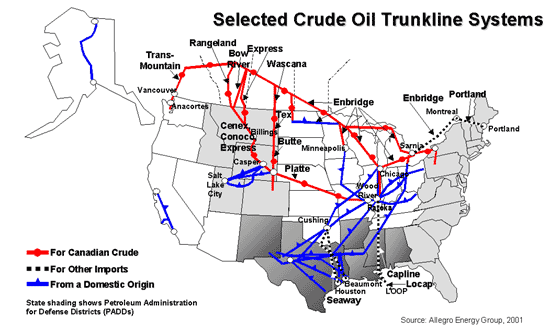 When the traditional oil fields in Texas, Louisiana, Oklahoma, and California were developed over the last 90 years, investors built pipeline systems to carry the crude to the refineries and bring the finished goods to market. Eastern refineries, built at the turn of the last century, processed oil pumped from under Western Pennsylvania (think of Pennzoil and Quaker State). As those fields depleted, some oil companies, like Sun Oil, vertically integrated by building their own domestic tankers to carry crude from Texas to refineries along the Delaware River. Other oil companies bought tankers from the massive Bethlehem Steel Sparrows Point boat yards. It was not until WWII that the first interstate product pipelines — like the Colonial and the Plantation lines — started to carry refined products from the gulf states to the Mid-Atlantic.

The new fields in North Dakota don’t have a pipeline structure. The Keystone XL was to carry Bakken crude along with the Canadian Oil Sands crude, and help unlock the oil trapped at the Cushing interconnect. While the southern portions of the Keystone are opening up capacity to move oil from Cushing, Oklahoma to the Gulf, the northern sections that cross Nebraska are still on hold while the current administration dithers about allowing the pipeline. Even if work started on the $5.4 billion pipeline today, it would be two or three years before any North Dakota Sweet flowed.

However, the rail infrastructure is in place to move the crude. Unlike building a pipeline, adding rail capacity is a matter of millions, not billions in investments. With rail, no single business has to support the total investment, as a pipeline requires. The railroads invest in track improvements and building loading terminals. Other companies invest in loading/unloading terminals. The refiners may invest by buying the cars to make up the unit trains that move the oil. There are even investment groups that are buying cars to lease to the railroads and the refiners.

Pipelines move oil in a single direction, from one point to another. No so with CBR, where a 100-car CBR unit train can follow any available rail line. The Keystone XL would move crude from the Bakken to the Gulf coast refineries, not doing any good for the refining operations along the Delaware. CBR is the lifeline for these Eastern refineries, and 100-car-unit trains feed crude into these operations every day. 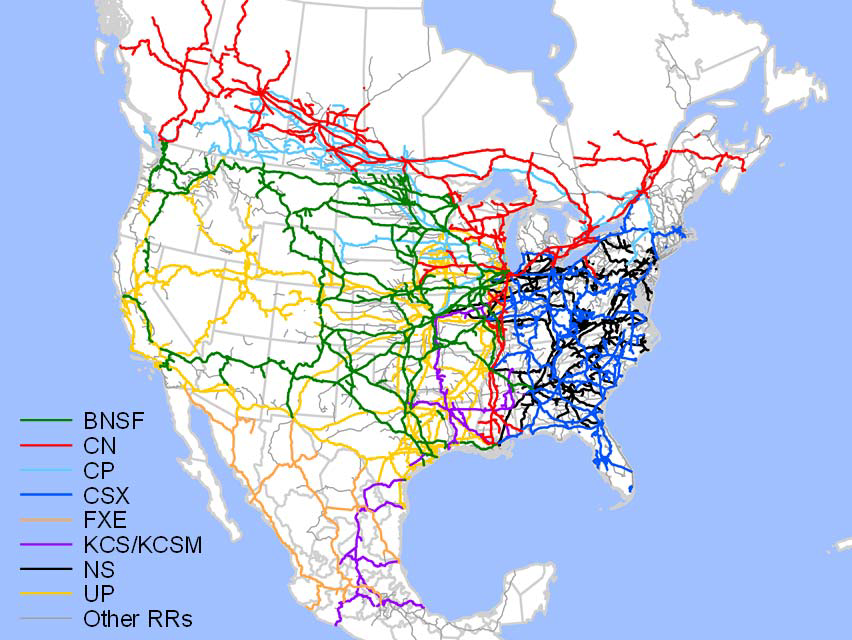 The Delaware refineries faced economic destruction in 2012 as the cost for the only crudes they could use, Brent, shot up in price, as the price of imported refined RBOB and CBOB gasoline was less than what it cost the Delaware refineries to make gasoline. Because of a scarcity of US Flag tankers (required by the Jones Act), these refineries could not obtain the lower-cost crudes from the new oil fields. In 2011 and 2012, over half of the refinery capacity on the East Coast shuttered because of the dismal economics of the trade. Sunoco Oil exited the refining business after losing billions in just two years (see How Does An Oil Company Lose Money).

CBR cures that problem. A unit train can move anywhere on the US rail network; it is only a matter of working out the schedules and tariffs with the various railroads. And the railroads are ready to deal — they want the volume. In fact, they need the volume. 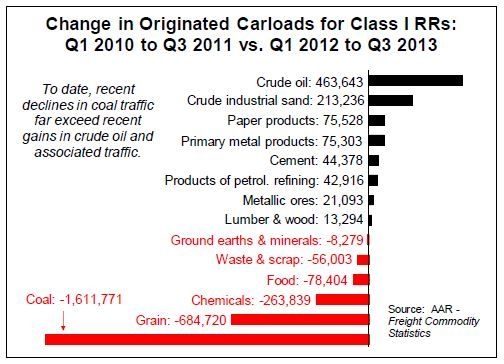 The railroads have faced some serious changes in freight volume in the last three years. The economic downturn put the hammer to Asian imports, reducing the flow of the import containers the major railroads hauled. Drops in grain production (due to drought) and chemicals put an additional dent in volume. However, the biggest change resulted from increased air quality standards, which brought about a reduction in coal-fired electric generation.

CBR and the development of fracking helped the railroads recover some of those coal and grain losses. BNSF Chairman Matt Rose commented in the summer of 2013 that CBR is backfilling 50 percent of the coal loss. BNSF is not the only Class I railroad enjoying growth. CSX moved over 46,000 carloads in 2013. Norfolk Southern is now moving more than 200 cars per day serving the PBF Energy refinery in Delaware City. NS exchanges unit trains with BNSF and UP in Chicago, hauling the trains to refinery customers throughout the Northeast and Mid-Atlantic.

BNSF and Union Pacific enjoy the majority of the CBR windfall, as both lines serve destinations on the West coast and Gulf coast. Union Pacific currently moves multiple unit trains per day to crude transfer terminals in St. James, Louisiana, servicing potential Keystone XL customers with 90 percent of the supply they would have gotten from the pipeline. BNSF moves crude to refineries in Anacortes and Tacoma, Washington, and in Richmond and Bakersfield, California. Early this year the Cherry Point, Washington refinery began to receive unit train service.

Crude typically moves through pipelines at a cost of $2.00 – $4.00 per barrel, depending on the origin and destination. CBR moves at a premium from the Bakken — $10 per bbl to the Northwest, $14 per bbl to California, and past $17 per bbl to the Northeast. At those prices, the railroads may be making more per carload for the oil than they did for moving coal.

The added revenue helps justify the added investments that each of the railroads is making to support the volume growth. BNSF and UP spent more than $200 million each on upgrades to lines and new facilities supporting the transfer facilities. CSX spent over $26 million to double track on about 18 miles of the River Line between Albany, New York and northern New Jersey, in order to serve a proposed train-to-barge transfer facility on the Hudson River, operated by Global Partners. 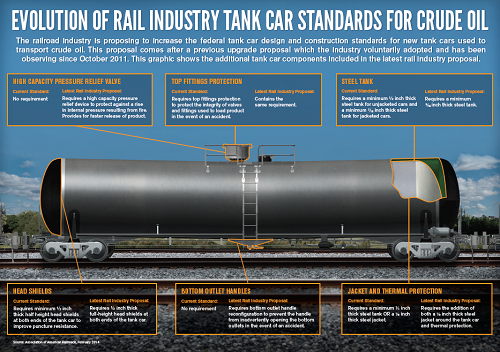 The investments don’t stop with the railroads. Shippers and the rail lines took delivery of almost 29,000 new DOT-111 tank cars in 2013, with over 55,000 still on backlog. Demand still is greater than the capacity of the four major builders — Greenbrier, National Car, Trinity, and Union Tank Car. All four report sizable backlogs on their order books, and are busy building the latest versions of the DOT-111, versions that they hope will meet new safety and design regulations due in 2014.