Almost all our work involves operations, where the action is. On every project, even when the client is talking about strategy, I want to see what is going on in the gemba. The gemba is the place where people and machines create value; the factory floor, the warehouse operations, the rail yards.

Going to the gemba allows me to see the things management overlooks. Our good friend Joe Paris has written about his gemba experience in these pages. Joe and I are both reformed industrial engineers, and we share the same belief—that truth is found in the real place, in the gemba.

When the gemba grumbles, it can tell you a lot about the health of a company. One of the purposes of going to the gemba is to listen to the people on the floor. Not everything you hear will be the truth, nor will it be totally accurate. But it will reflect the perceptions of the people who spend their time inside the action. The gemba is the guts of the organization, and when there is trouble in the gut, the rest of the operations have problems. That is why I always insist going to the gemba, so I can hear the grumbles. 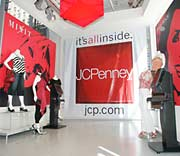 Short of going into the JC Penney stores, distribution centers, and offices, what options do we have to get to the gemba? I must admit, I cannot remember the last time I entered a JC Penney store; it could be as long as a decade. I can’t even tell you where the closest one is without hitting Google. If I am going to do my due diligence, I have to go. But if I were to go today, it would be post-Ron Johnson, not during Ron Johnson’s tenure.

That is why GlassDoor is a useful tool. GlassDoor is an employee comment and job site. They make their money from the help-wanted advertisements that companies place on the site. They get potential eyeballs from the employee-generated content, the anonymous reviews that past and present employees post voluntarily. GlassDoor is but one resource we use for information about a prospective client. Some investment analysts report they use the site to take the pulse of the culture of a company. It is a good resource for learning from the employee’s point of view what is going on in a company.

People who post are usually looking for a job, and former employees are more likely to write negative reviews. Still, even the negative bits provide great insight when we use the site to learn about clients. For one client, we found the employee comments, both good and bad, to be right on target—that is, they matched what we actually saw when the client hired us to improve operations. At times, we will see detailed descriptions that, if someone is paying attention, are accurate enough for insiders to guess who the employees are posting about.

How Clear Is the JC Penney Glass Door?

I turned to GlassDoor to take the blood pressure of the JC Penney crew. What first caught my eye was the 40% approval rating for ex-CEO Ron Johnson. Employees have three options when it comes to CEO approval:  Approve, Disapprove, or No Opinion. Out of the 1,015 comments, 410 approved of CEO Ron Johnson. Now, that does not mean 60 percent do not approve, because a sizable number of commenters had no opinion or did not bother to answer the question. I also suspect that some of the approvals may reflect positive ratings for the once past CEO, Mike Ullman.

About 600 of the total reviews were posted after Johnson’s November 2011 arrival at JCP. While the CEO ratings are notably negative in the final months of Johnson’s tenure, there are many positive ratings. Working back through the comments to before November 2011, there is a lack of positive ratings—mostly no opinions and negatives.

Many of the comments after February 2012 reflected hope and excitement about the new marketing plan and the rollout of the pricing plan. They start to turn negative about the strategy by July and August 2012, and the volume of negative comments about the transition rises swiftly after the 2012 holiday season.

Throughout, there is a constant complaint about store-level management. Granted, employees will always slag away on their managers when they get the chance. Still, the frustration with management—specifically over attitude and competence—appears to be a consistent theme going back to when Johnson first came to the company. There is a running refrain about competent older managers being forced out. Going back into the time before Ron Johnson’s tenure, the comments about the missing older managers continue. Several comments from the summer of 2011 focused on how the company forced more than 400 older managers to exit, replacing them with “younger and cheaper managers.”  Going even further back in time, the general tone of the reviews improved in the middle of 2010, before management launched a number of cost-reduction measures.

Analysis of the Commentary

It is important to remember that these reviews are often feedback from former employees, who may have a bone to pick or an axe to grind. Penney is a large company, and while store counts are well known, head counts are a different matter. Conflicting press reports and opaque corporate announcements can help to fog the facts, as does the retail industry practice of converting full-time employees into part-time employees.

It is clear that headcount trimming happened at JCP before Ron Johnson arrived, with a focus on store department and floor management. As one former sales manager shared in his April 7, 2011 review, “JCPenney went into survival mode and cut around 300 management positions effective April 1st 2011. These cuts had nothing to do with job performance. The company is very clearly focused on bringing in younger, CHEAPER talent. It doesn't matter how good you are at your job, you are the minority if you have a family. They do not promote an atmosphere of family; they want you to be married to your job and family comes a distant second. In my time there, underqualified kids were promoted to better management positions while us "family managers" were left on the outside looking in.”

The complaints about insensitivity to managers with families appear multiple times in 2011 and 2010. As another sales manager shared, “It is a great company if [you are] Single. Since [I was] hired the company has changed direction on approaching management on relocation. They do not include family decisions. They only give you 2 options without considering your family, spousal job and children schooling. Either you accept the relocation to wherever they send you or you are dismissed.”

Even people in the HR function in the corporate office have issues. “Teams aspire to be mediocre is a common theme. Decisions dictated down-buy in or "Penney Speak" are mandatory.” In one of the most scathing comments of 2011, “Advice to Senior Management – You breed apathy.”

After 2012, the complaints about young and inexperienced managers increased. So did the complaints about the change in direction, too many initiatives, and the constant fear of layoffs. After the release of the earnings statement in February, 2012, approval ratings for Johnson start to slide, and more blame is laid at his feet. The frequency of complaints about store managers, team leaders (TLRs in the JCP vernacular), and a clear lack of organization increased.

Clearly morale suffered. But it was not a bed of roses before November 2011, when Ron Johnson took over. Moreover, the employees were somewhat apathetic about executive management, and more concerned with store-level management changes, how youth replaced experience.

Transitions are very hard to do. The strategy is easy, since it is just making commitments. Developing tactics is much harder, because of the level of detail required to devise the plans, and the level of operations knowledge needed to know how to plan to make changes. Hardest of all is the action on the floor, the changes that gemba must make to execute the tactical plans and deliver on the strategic promises.

When did JC Penney shed the critical management layers that carried the doctrinal beliefs of the company? Well before Ron Johnson’s arrival. More about that later.