So remember how a volcano disrupted air travel for the EU in 2010?

In 2011, Mother Nature was really tough on supply-chain managers. This was a clear reminder that man can plan like hell, but at the first point of contact those plans go to hell.

A Recap of the Fun 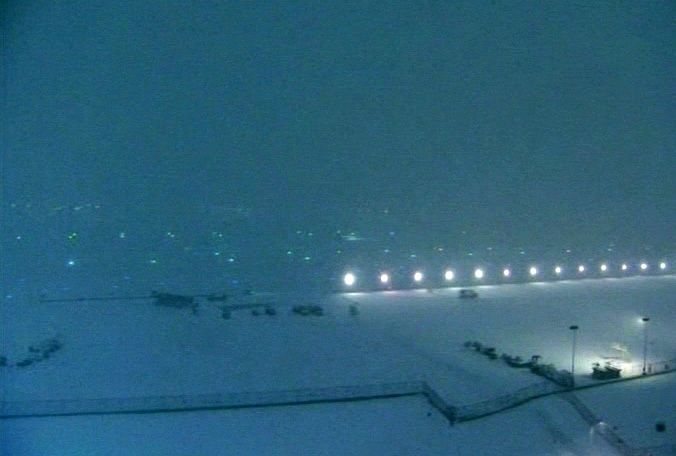 January: Atlanta gets a big snowfall. The South stops moving for a few days. Flights stop. People are stranded. I attended a conference a week after in Atlanta, and the staff who put on the show—all local—were still walking around in a little bit of a daze, albeit in great spirits. The airlines had contingency plans to cover these kinds of events, but still… when one of your major hubs sees snow like in the photo above, your network system is going to be a mess for a few days.

The bottom line is, you can still dig out of snow, even if you don't have the equipment to do so ready at hand. You may not have plows, but front-end loaders work just as well. And in the southern states, there may be warm weather the following week, which always helps.

February: Now for the East Coast and the Midwest. New York and Chicago get buried. 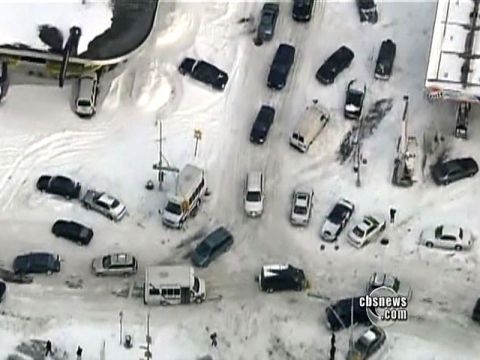 At the end of January a huge blast of cold air descended across Canada over a warm, moist air-mass. The result was snow, lots of it, and very fast. In Chicago the snow moved in so quickly that it was almost measured in feet per hour, not inches. Another storm-front moved north from the Gulf under that same arctic mass and created thunder snow in Virginia, New Jersey, and New York.

Three different storms, each with the same result. Within a few hours the Metro areas of New York, Chicago, and Washington, DC were snarled. Each was a separate snowfall, but they all had the same profile:  they dumped large amounts of snow very quickly. No preparation could have helped. In the DC area it rained throughout the day, washing any salt off the roads, and when the cold air hit the warm rain front, there was lighting, and snow fell at a rate of six inches an hour. Chicago saw almost the same play. But in both of those storms the crews worked to clear the roads and get people home who had sat in their cars overnight. In New York, work crews chose to use the event to make a political statement. 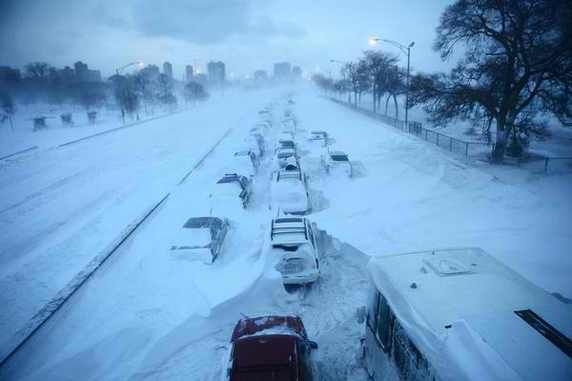 This picture of Lakefront Drive in Chicago drifted over, the snow trapping cars and buses, reminds us how quickly our transportation network can become snarled. Later in the spring, the city of Chicago suspended but did not fire its snow-emergency manager. I guess you could consider that to be just another example of the hubris-driven, unrealistic expectations with which mankind faces the realities of nature. 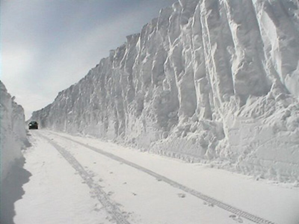 In North Dakota things were open. Impressive, and open. You want to remember this picture, it is the cause of something else.

March:  Japan gets sucker-punched by an earthquake and tsunami. Sitting in SFO airport listening to reports of the earthquake, I thought about how many of our clients would see supply chain disruption. Most of the news reports focused on West Coast preparation for the possibility that this tsunami might hit California. Just as I boarded the aircraft, I watched some of the first video of the waves as they swept over northeastern Japan.

It took over 18 months for Japan to dig itself out of the damage created by the waves. The problems they had with their nuclear power plants—and the lasting effects of those problems on commerce—serve to remind us that when you design a structure to withstand what you think the worst possible event could be, Mother Nature will present an even stronger event. Supply chains and manufacturing schedules across the globe were affected by the continuing challenges Japan faces. Ford Motor Company was unable to provide some of its most popular colors because the one source of a key ingredient in the pigment was no longer operational.

The Southeast US got its usual pounding from twisters and storms in the spring. But March was truly an unusual month in 2011, a harbinger of even more bad news to come.

As the map to the right shows, severe storms inundated the southeast quadrant of the US with rain. As a nation we are somewhat used to seeing that kind of activity, and in many cases the storms are small events in a very large country. It's only when you look at a plot of a month's activity that you begin to understand the impact. Most of the severe storms in March were heavy rains with straight winds, resulting in saturated ground. On such ground, trees lose their anchoring, and moderately stiff winds will blow them down over power lines and roads. The heavy rains also created localized flooding. Remember this map, because it helps set the stage for even more pain later on.

April: Tornadoes in Wisconsin. Tornadoes can happen almost anywhere, not just in the lower Midwest and South.

More tornadoes in North Carolina shut down spring break travel for many families. If your travel plans took you through Charlotte or Atlanta the week before Easter you may have had to change your plans. If you left on Friday you were fine, but Saturday departures were different story. That same storm system created havoc for a few distribution networks. A well-known grocery chain lost the use of one of its distribution centers when a tornado ripped the roof off the freezer, and in the process set off the sprinkler system in the dry-goods warehouse. A utility trailer manufacturing company dodged a bullet when a tornado skipped over the roof of its Glade Springs, Virginia plant. The plant suffered some structural damage, but production resumed within a few weeks.

Central Alabama suffered the most that spring, in terms of lives lost. Tornadoes ripped through Tuscaloosa and Birmingham, destroying not only neighborhoods and homes but businesses as well. A wall of tornadoes marched through the South that day, creating widespread damage. Several trucking companies saw their offices and shops destroyed, but were still able to maintain operations with backup data services and cell phone communications.

MAY: All that snow from the winter and the wet spring created floods on the lower Mississippi. Remember the pictures of the snow in Chicago and North Dakota? As that snow melted, it rolled down through the Missouri Valley and the upper Mississippi and Ohio rivers. 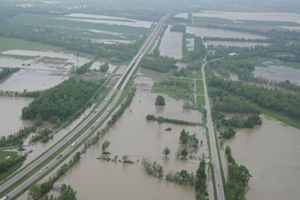 This situation spurred a historic move by the US Army Corps of Engineers:  all three major flood-control floodways in the system (Bird's Point in Missouri, and Bonnet Carre and Morganza in Louisiana) were put into action. The battle over the Bird's Point floodway in Missouri pitted farmers in Missouri against residents of Cairo, Illinois. This battle took place in courtrooms, as two states argued about who should sacrifice, until finally the Corps of Engineers dynamited the whole levy.

The flow of "Old Man River" just kept rolling along. The rains continued and traffic challenges became the norm. Within the week, traffic along Interstate 55 and the connections in and out of Memphis snarled to a stop as the Mississippi flood-waters closed the roads. Highways and roads throughout Arkansas closed daily as streams and rivers overflowed their banks.

Barge traffic slowed and at times even stopped along the river as cities in Mississippi and Louisiana either flooded or came very close to being flooded. Highways, rail lines, barge terminals…everyplace where man had built anything, the river pressed against it. Some won and others lost.

On Sunday, May 22, 2011, a single tornado visited Joplin, Missouri, carving a 3/4-mile wide, five-mile long swath of destruction across the city. One major hospital was a sure loss. WalMart and Home Depot were wiped out. Joplin is a transportation crossroads:  Interstate 44, the main highway between the Midwest and the Southwest, passes through the city of 50,000. Again, the loss of life and property from this single funnel was devastating to the community. 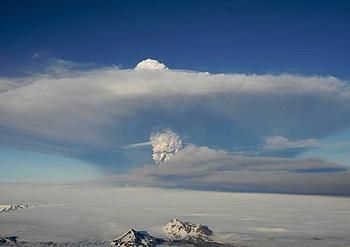 That same weekend the eruption of Iceland's most active volcano, Grimsvötn, sent a plume of ash more than 20 kilometers (12 miles) into the air, causing flight cancellations in Scotland and a change of plans for President Barack Obama, who was in the UK on a state visit.

So, How is Your Risk Coverage?

Some supply chain networks were unaffected by the long list of events presented above. Others were affected in ways not yet understood. The long-term effects of some of these events were minimal beyond the local area, but others were felt around the globe for some time.

Beyond the practical impact of the logistics assets and networks themselves was the impact on the revenue of the businesses that served these areas. Many wholesale distributors would see a 20% or greater hole in their revenue that year because their customers who were located in the flood or tornado areas were wiped out and most likely would not reopen. Those areas would recover, and perhaps new restaurants, grocery stores, and convenience markets would open and replace the businesses that were wiped out. But perhaps not.

This discussion is not only about the threat Mother Nature poses to your supply chain, but about how your demand chain is affected by those same storms. The snows of January and February 2011 were a major nuisance, but except for a few reports of warehouse roofs collapsing under the weight of the snow, very little loss of property or life resulted from the heavy snows. The flooding in the lower Mississippi River was a direct result of the combination of those heavy snows and the continued wet spring, which a logical mind could have foreseen.

Risk comes in many forms. How prepared are you?

Mike Tyson once said, "You know, there were a lot of people who got in the ring with the strategy of how they were going to beat me… and I hit them." Just like Mike Tyson, Mother Nature has the ability to knock you out.

What have you done to prepare yourself?