Can Meat Be Too Cool? 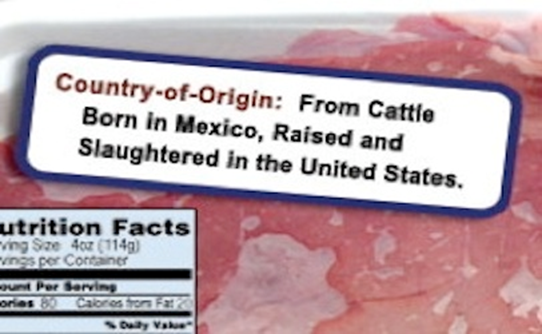 You may have noticed signs in grocery store meat departments announcing that the chicken is a product of the US, and that the beef may come from Canada, Mexico, or the US. Look at the price label on the next package of ground beef or steaks you pick up in the meat case, and you'll  find the Country of Origin (COO) information on it. Protein of all kinds, including fresh, frozen, and processed beef, pork, poultry, and seafood, must comply with Country of Origin Label (COOL) regulations in the US.

Country of Origin Labels became mandatory in March 2009 after years of debate between the government and various food industry groups. Both US farm and consumer groups support COOL because it helps consumers be better informed about where their food comes from. While the animal producers and consumer groups supported COOL, the processors in the middle of the food supply chain fought the measures because of the additional cost and effort involved in tracking the Country of Origin (COO) of each animal from carcass to final cuts and grindings.

In the past 30 years, US production and consumption of pork and poultry has grown much faster than beef. Since 1982, the poultry industry has almost tripled production, and the pork industry almost doubled it. In the same period, beef production has only increased about 20 percent. These order-of-magnitude increases in production feed the greater demand for pork and poultry in both the domestic and international markets.

While the processing operations of the beef industry consolidated, cattle production did not. Beef is the “American protein,” or at least, “It’s what’s for dinner,” as Robert Mitchum, Sam Elliott, and now Matthew McConaughey have been reminding us in television commercials dating back to the 1990s. But as a protein industry, the industry that converts cattle into food drives the growth of the meat packing business, and much of the beef industry today still operates the way it did in 1880. Dating back to the 1850s, major meat-packing operations are an American phenomenon fighting modern global regulation.

Understanding the History and Its Impact

Prior to the Civil War, in the 1840s – 1850s, the meat industry was local, just like the rest of the food supply chain. Farms around a city provided the vegetables, grains, and meats consumed by the people in the city. Without refrigeration, smoking and salting were the only ways to preserve meats, and canning was the only way to preserve vegetables. The transportation network still depended, for the most part, on horse-drawn wagons and the fledgling railroads in the Eastern US. Food rarely traveled more than 100 miles from farm to fork.

The Civil War started to change the meat distribution dynamic, as the Union and Confederate governments made contract purchases to buy meat to supply their armies. Larger meat-packing plants, dedicated to the production of barrels of salted pork and beef, sprang up on both sides of the conflict. The timing of the war proved to be one of the levers that propelled the meatpacking industry.

A young Philip Danforth Armour built one of the first of the major meatpacking powerhouses. After earning a fortune in the California Gold Rush, Armour first started a wholesale grocery company in Milwaukee, formed a business partnership with a grain merchant, and created a meatpacking partnership, Plankinton, Armour & Company. Using his sharp business skills and market vision, Armour took advantage of the changing prices of meat during and after the Civil War. He predicted that pork prices would fall with the fall of the Confederacy, and locked in contract pricing that proved to be double the market price after the war, earning a profit between $1 and $2 million. Armour used that profit to expand his packing plants into more cities, like Kansas City, Missouri.

After the Civil War, soldiers and farmers moved west, with the Westward Expansion, becoming cowboys. Men with capital bought land and started to raise cattle to feed the growing populations in the East. The great cattle drives brought the herds east to the railheads in Kansas City, and the trains carried the livestock to the stockyards of Chicago. Chicago became the center of meatpacking operations, taking hogs from Wisconsin, Illinois, and Indiana, and western cattle from the rail lines from Omaha and Kansas City.

Armour’s move to establish a slaughter and packing operation in Kansas City marked the first time any of the Chicago meatpackers had ever moved operations out of Chicago. By moving the packing operations closer to the end of the trails, Armour lowered the inbound cost of the main raw material — cattle. The Armour Company cattle buyers became the dominant force in the Kansas City stockyards after the Civil War.

The explosion of the railroads after the Civil War increased the supply of beef, building the dominance of the beef industry. Armour’s expansion of new packing plants in Kansas City, Omaha, and St. Louis did more than just increase capacity; these plants shaped a new way of running meatpacking operations. Armour’s new plants used the latest technology, such as steam boilers to drive steam-operated machines. The new plants introduced the assembly line to American industry, using overhead chain conveyors (driven by steam engines) to move the animal carcasses through the operations. Armour’s managers defined the steps in the process, from the movement of the live animal from the holding pens to the dressed carcass at the end of the line. The company engineered each of the cutting and handling steps in the process, and identified ways to harvest every part of the animal, eliminating what had traditionally been considered waste by converting “everything but the squeal” into useful articles and materials, like leather, fertilizer, and glue. Philip Armour clearly led the transformation of the industry.

The preservation and transportation of food — specifically meats — remained the greatest challenge. Of the three main protein sources, beef has the longest shelf life. Both pork and chicken rot quickly, but beef lasts longer. Still, the long transit times of the late 1860s and 1870s kept fresh meats a local commodity in the eastern US.

Point-to-point transportation in the 1870s was not rapid. Even with the first transcontinental railroad connection in 1869, rail freight transit times from Chicago to the eastern seaboard cities could take weeks. The rail network doubled from 53,000 miles in 1870 to over 110,000 miles in 1880.  New rail lines opened between Chicago and the major eastern cities to help spread machines and manufactured goods from the East and raw materials and foods from the West. Still, many eastern railroads did not use the standard gauge in 1870, making cooperation between the eastern railroads and the exchange of freight a challenge.

As Philip Armour built his meatpacking empire in Chicago and the Upper Midwest, another famous name in the meatpacking industry, Gustavus Franklin Swift, started his enterprise in Eastham, Massachusetts in 1855. After partnering to form Hathaway & Swift, Gus Swift followed the meat markets westward, through Buffalo, New York, before making a final move in 1875 to join the growing packing-house industry in Chicago.

Poultry remained the freshest of locally sourced meat, as everyone kept chickens for fresh eggs and ate the meat for Sunday dinner. Even in many cities, people who had even the smallest plot of land kept a chicken coop, harvesting eggs daily and picking a male chicken out of the yard for fresh meat, hence the term yardbird. Pork processing required a more extensive facility, and more space. The size of the animal prevented single families from processing a whole pig, so butchers processed the animal and sold the prime cuts to consumers. Today’s southern delicacy of smoked BBQ pork is really the product of what people did to preserve pork in the nineteenth century. 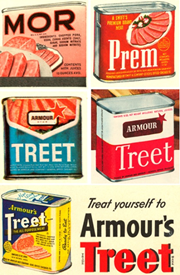 The growth of the railroads allowed the growth of the cattle industry, as cattle could be moved in rail cars to slaughterhouses in distant cities. These local facilities processed the animals for delivery to local retail and butcher shops. For the most part, the meatpacking industry preserved meat by smoking it or by packing it into barrels with salt. Corned beef is the modern form of what was cheap beef in the late nineteenth century. Until Armour developed a way to apply the canning process to meat, salted beef and pork were the low-cost protein alternatives.

Armour and Swift became the dominant companies in the meatpacking industry. Swift consolidated operations in Chicago, while Armour continued to apply his new techniques to his operations in distant cities. Imitation is another form of innovation, however, and both Swift and Armour copied and improved on what they saw their competitors do in growing their businesses. Swift quickly copied Armour’s assembly line and mechanization, and Armour copied Swift’s refrigeration and transportation techniques.

Swift wanted a way to ship dressed meat processed by his Chicago operations to eastern markets. In his first attempt, he shipped dressed beef in a string of ten box cars over the Grand Truck Railway from Chicago to New York in the wintertime. He attempted removing the doors so that cold air would keep the meat cold, but that idea proved impractical. The next design involved ice packed in chambers on either end of the freight car, with the dressed animal carcasses hung from rails installed in the roof of the car. The swinging meat made the cars top-heavy, and the swaying motion of the cargo could overturn and derail the cars on high speed curves.

Swift kept at the design, hiring Andrew Chase to design a car that packed the meat tightly at the bottom of the car to lower the center of gravity, and placed the ice chambers high so that the cold air dropped from the ice to keep the meats cold. This design worked, and Swift quickly started to sell boxed meats to eastern wholesalers, delivered by a fleet of refrigerator cars owned by the Swift Refrigerator Lines (SRL). By 1900, Swift operated about 3,500 cars. Philip Armour, ever keen to his competition, quickly embraced the idea, and then one-upped his competition by building a fleet four times the size of Swift’s.