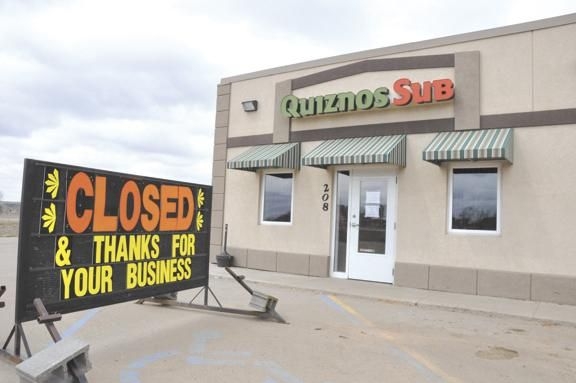 In 2012, the Quiznos sandwich chain  announced that the company was struggling with a sales slump. More frightening was Quiznos' $850 million debt-load.

With over 3,500 stores across the United States, Quiznos suffered mightily during the recession, as fewer consumers visited shopping centers and other places, like airports and rest areas, where Quiznos is located. That downturn forced Quiznos to close about 1,500 stores.

The toasted submarine sandwich is not nearly as unique or as new an idea as Quiznos would like us to believe. Toasted grinders and subs have long been mainstays of many of small sub shops in cities like Philadelphia and Baltimore. In the Midwest, the Schlotzsky's chain (Home of The Original® Sandwich) grew with the toasted sandwich. Now it looks like just about every sub-shop chain has a toasted treat.

Was Quiznos just a product of the overheated economy of the 200os? As the mac-daddy of the submarine sandwich industry, Subway added multiple flavors of bread and began to offer toasted sandwiches, did Quiznos become just another submarine sandwich joint?

Maybe the economy was just too rough for Quiznos. Or perhaps the real problem lay in the mountain of debt the company was under. Let us look at the history of the company to understand a bit better.

The first Quiznos opened in Denver's Capitol Hill neighborhood in 1981.  Quiznos CEO Rick Schaden purchased his first Quiznos franchise in Boulder, Colorado in 1987. Mr. Schaden and his father bought the entire Quiznos franchise operation, a total of 18 restaurants, in 1991. They rapidly expanded the chain, using debt from different investment banks and hedge fund investment groups. The company opened its first overseas location in Japan in 1999. In 2003, Quiznos became the world's 27th most popular sandwich chain, with over 4,000 restaurants.

To fuel that kind of growth you have to have a lot of cash. While the sub sandwich business will generate some cash, it probably cost in the neighborhood of $200,000 to open up a new sub sandwich shop with all the fixtures, construction, signage, permits, licenses, and working capital. If you were to start a restaurant chain today and instantly open 4,000 locations, you would need roughly $800 million capital. I would call that a significant amount of cash, wouldn't you?

Quiznos is a franchise:  they sell franchise ownerships to small-business people, including gas stations and convenience stores. To get started, they require $70,000 in cash and a minimum net worth of $125,000. A home-study program, Quiznos University Training, followed by 18 days in a regional training store and six more days at Quizno’s University headquarters in Denver, is part of the package. After meeting credit standards and passing the Quiznos Competency Test, the lucky franchise then has the right to plunk down the capital for a location, equipment, fixtures, licenses, and supplies. The cost of entry runs between $185,450 and $264,950.

Why Were They Failing?

As a franchiser, Quiznos makes its money by selling franchise rights to independent owners. They also make money from the food, which restaurants can buy only through authorized distributors. Each year a franchisee is open, they pay their annual tribute to Quiznos.

Now the survival rate of small businesses is pretty dismal. For every 100 small businesses that start, only five ever make it to their fifth birthday, and within the first three years 80% of new businesses fail. Some small-business people get into a franchise hoping to leverage the education and structure that an established franchise business provides.

As the economy tanked, over 1,000 Quiznos shops failed.  Some former owners reported that it was better to shut down and pay the rent on the closed store than to keep it open and operating. Labor and energy for a store that generates $7,000 to $8,000 per week is a painful expense. A typical store could be open as long as 90 hours per week, which usually requires a minimum staff of two to three people. At $8.00 an hour, the base labor is $2,160, plus another $750 for benefits and employment taxes, for a total labor cost of $2,900—about 40% of revenue if the store does only $7,000 per week.

Under the franchise agreement, the store operator must buy all food, supplies, and equipment from a Quiznos-authorized wholesale distributor. That can be costly. In 2010, store owners revolted and took the chain to court, and won over $100 million in price rebates and marketing costs.

As the franchises collapsed under the high costs and the dead economy of 2009 and 2010, Quiznos reworked some of its debt in June 2010, and started a program to open 600 company-owned and operated stores. Former Quiznos franchise owners contended that Quiznos did not understand the nuts and bolts of operating a profitable restaurant. Some reported that the franchisor's field consultants did not pass on best practices or what works at other stores, and the advice that they did give was based on making the franchising firm profitable.

As stores closed, the revenue generated by the annual franchise fees and the wholesale food-supply chain dropped. Add mounting legal bills and legal liability, and the company was in serious trouble.

Our sources report that the company remains cash-flow positive and is current on loan payments. The company’s loan terms forbid a total debt load of more than seven times EBITDA (earnings before taxes debt depreciation and amortization).  Assuming a debt load of $850 million, we back into an EBITDA of no more than $121 million.  In recent months, the company told lenders it had $118 million of annual adjusted EBITDA, which puts the debt load at 7.5 times earnings.

So what should Quiznos do? One option would be to hire a financial adviser to assist in working with the lenders to develop a new financial structure for the company. This is exactly what Quiznos did in 2012. Quiznos also announced that business would continue as usual for franchise owners, employees, and other stakeholders.

Quiznos was hoping for debt forgiveness, trading ownership stakes in the sandwich chain. Fortress Investment Group and Avenue Capital Group held a major chunk of Quiznos' debt, which was reported to be about $225 million and term loans.  The question was, would these two hedge funds accept an equity-for-debt trade?

So why does this matter to a supply-chain guy?

First, there are wholesale food-service distributors that provide distribution services to the chain. These distributors buy the food, inventory the food, distribute the food, collect payments from the stores, and pay some money to Quiznos. As stores continue to close, the distributors feel the pressure of the declining revenue.

Second, Quiznos is not the only franchise chain that is failing. Sbarro, Inc. filed for bankruptcy protection in April 2011. Others are failing too, as their revenues drop.

As these franchises fail, they put distributors and suppliers at risk. One of Quiznos' major bread suppliers failed and suddenly closed its doors in 2010. As other restaurant chains failed in 2009 and 2010, some wholesale distributors who loaded up big on systems sales felt a shortness of breath at their rapidly falling revenue. In order to avoid failure, some sold out quickly to larger distributors like Sysco, US Foodservice, and PFG—distributors with fortress-like balance sheets.

Businesses fail for a number of reasons.  Most die because of declining revenue and an inability to cut costs; often the cost of debt is the mortal wound.