“There they go again!”

“They just don’t do it right!”

“I wish that the managers would tell them to do it right!” 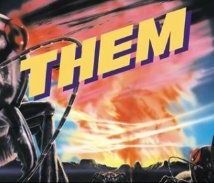 I stood there listening to the folks on the first shift picking and labeling teams complaining about the work that the second shift had done overnight. At first, I could not understand what was wrong. It looked like they had staged the picked product correctly. I saw some partially picked orders, but the paperwork on the pallets indicated that these orders were not complete, and the paperwork for the unpicked portion was in the orders-to-be-picked bin.

Finally I asked, “Who are they? Who is them? What are they not doing right?”

The coordinator started to list all of the sins on the pallet. As he was listing them, I looked at the paperwork and the pallet. “This item here is missing. They didn’t pick it!” he said with a triumphant harrumph.

After looking at the paper order, and looking in the large box on the pallet, I reached down and moved a bag of pins to reveal the bag that held the missing parts.

“You might want to check the facts more closely before starting to flail away at people who aren’t here to defend their work,” I said as I handed the paperwork back to the coordinator. “It looks like the missing parts were here all along.”

I looked at his confused, sheepish face before I turned away to go solve another problem the second shift had supposedly left for the first shift to fix.

“Who” Is One Word That Places Blame. So Is “They.”

There was quite a bit of blaming going around in this distribution center. The first shift complained about mistakes the second shift made. The second shift complained that the first shift did not produce as much work. The engineering manager complained that the pickers did not follow the process. The employees on the floor bitched about how some of the managers were stuck up. The shipping dock complained about the consolidators. The consolidators groused about the label tables.

The complaints always contained one of two words: Who and They (or Them). 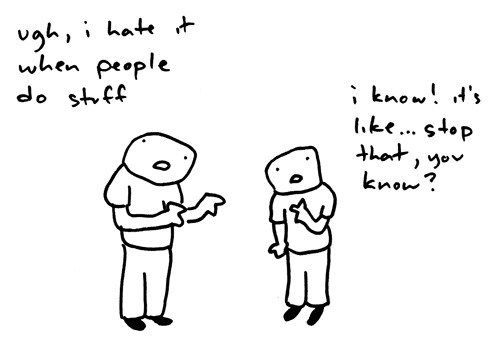 One of the true poisons in any organizational culture is blame. It is much easier to blame others than to to accept responsibility for your own actions. The more energy you spend on blaming others for their failures, the less energy you are putting into identifying and correcting your own behavior.

It is so easy to blame the faceless them. The process is easy because you are not naming names. It is easy to blame them for why you can’t do your job. “We can’t get to that because of the extra work we have because they did not do it right,” was a consistent complaint on the floor.

Blame is an ugly loop that breeds victims and procrastination. The emotional logic pattern:

Procrastination: “We can’t get this job done now because of the rework. They did not do the job right.”

Victim: “Who keeps leaving this trash in my way? I can’t get the work done because I have to take care of someone else’s trash!”

In both of the examples above, the easy blame of the faceless other justifies procrastination and victimhood. As long as that pattern of behavior is accepted in the organization’s culture, progress remains stalled.

Blaming the faceless others is easy because there is no true conflict. Any coward can blame them for the failure. It takes courage to name a name, to blame an actual person. Why? Because there is the chance for future conflict, a chance that the person who got named will hear about the complaint and confront the accuser.

It takes even more courage to place blame face to face, which will certainly create conflict. It takes courage to address someone else’s failures face-to-face, but holding people accountable is important.

The first step in driving a spike into the heart of blame behavior is to force the complainers to put a face to them. My practice is to nip the complaint in the bud by asking, “Who is ‘them’?” By asking that question I am making the person in front of me name a name, asking them to have the courage to actually place blame, and not just blindly accuse a nobody of being the cause of their failure. When you ask, “Who is ‘them’?”, you are making an effort to hold the person in front of you accountable for their own actions.

This is a confrontational process. As a leader, you must have the courage to step up and confront the behavior of the employees. That means confronting the errors as you see them, and quickly holding the line in driving accountability. The amazing thing is that most people will not shy away from the confrontation, and they will come back with a less faceless (but still nameless) blame statement very quickly. You must confront the blame again, forcing the complainer to name a name. Great leaders confront blame with rapid, relentless vigor, never letting up.

“You know; the second shift.”

“No, I don’t know what you mean. Who on the second shift?”

“Then how do you know enough to blame ‘them’? It could be anybody, even someone on the first shift. Right?”

In most distribution centers today, the systems track what employee did what work. Using the system you can discover the “who” that touched the work before it got to the complainer.

“I don’t want to hear 'they' in any of your complaints. The system knows who touches what – if the people are using the system. And you know that there is no way they could have picked the order without using the system, right?"

With that admission, we walk over to the system terminal and look up who touched the order. Often we discover that the last person to work the order was on the same shift, one of their direct co-workers.

“Let’s go talk to them right now about what you think.”

With that statement, I am stepping up the accountability. I am taking action to solve the problem, enlisting the associate to step up, to be accountable by helping hold his co-worker accountable for performance and behavior. The associate is more willing to step up because they know they do not have to go it alone, that I am there to guide the process and to ensure professionalism. By making that statement, I am showing my willingness to walk my talk.

Patterns of Blame Are Habits

How many times do you hit the snooze button on your alarm each morning? Which sock do you put on first, the left or the right? Do you brush your teeth before or after you shower? Do you make the coffee or feed the cat first? Examine these questions, and think about when you actually thought about what you were doing. These are habits. Blaming the faceless other is just another habit.

If you are going to break the habit of blame in your operations, you have to be relentless, constantly pushing people to have the courage to be accountable, to dig into the facts and point to the specific behavior that causes failure. You have to demonstrate respect and show them that confronting their co-workers’ behavior is being respectful—and that blaming the faceless ‘them’ is disrespectful.

I found that conversations like the one illustrated above happened every day, multiple times per day and multiple times with each person. They have to. It takes repeated effort to correct habitual behavior, to replace negative habits with positive habits. The more you work, it the easier it gets.

As a leader, changing your own behavior is the first order of business. If you find yourself in the bad habit of placing blame on others, step back and assess. What triggers your habit? Can you recognize the trigger? Work to see that trigger and you are halfway there.

The next step is to think about the outcome you want. As a leader, you want to inspire people to do the right thing in the organization. Building and supporting a culture of respectful accountability is one way to do that. Imagine what is in it for you when your co-workers see you as respectful and accountable.

Apply the same logic to influencing others to behave this way. Imagine what is in it for the people whom you work with when they act with respectful accountability. See the improvement in how they work together, the elimination of the stress in their lives. Picture that and use that as your measure of success.

Eliminating a culture of blame, removing “they” and “them” from the conversations in your operations, is a victory every worthy leader aspires to achieve.