It is not unusual for ships to run into rough seas. And it is not unusual for container ships to lose a few cans to Davy Jone's Locker in the rough stuff. But it is unusual for rough seas to break the back of a container ship, which is exactly what happened to MOL Comfort on June 18, 2013. Enroute from Singapore to Jeddah with a load of 7,041 TEU, the 8,000 TEU ship cracked in half about 200 miles from the Yemeni coast. All 26 crew – made up of 11 Russians, 1 Ukrainian and 14 Filipinos - escaped the sinking ship on two life rafts and a lifeboat. 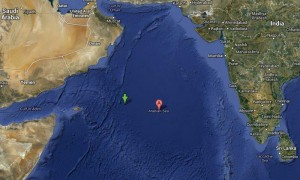 The information was sketchy and conflicting, with early reports that the ship sank. It now appears that both the fore and aft sections are afloat and adrift. At about noon JST on June 18, (07:00 local time), the fore part of the hull was drifting around 13'00"N 60'40"E, and the aft part was about 19 miles southwest from that position. Both parts of the ship were drifting in an east-northeast direction.

The weather in the area was poor when the accident occurred, and the crew of 26 had to cling to the lifeboat and rafts in six meter high waves. There was no new information that might shed light on why the hull suddenly began to crack. The 8110-TEU-container ship was close to being fully loaded with 7,041 TEU, spread over 4,500 containers, on board. 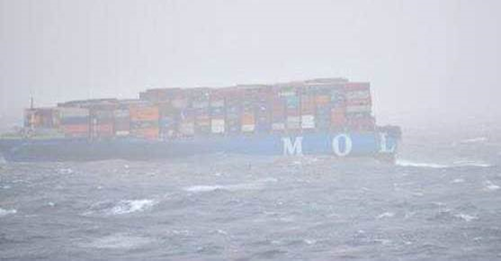 The MV Yantian Express was first to arrive on scene and rescued the 26 crew members as the ship broke into two pieces, and started drifting.

Built in 2008 at the APL Russia, the ship started sailing as the MOL Comfort in 2011. There is little to explain this catastrophic structural failure. Naval architects design container ships like this to handle long periods at sea and large waves that crest on the bow and stern and have a trough amidship. When the ends of the ship are suspended by the tops of the waves, the center section of the ship sags, putting extreme tension on the keel and compression at deck level. As the ship moves through the waves, the opposite action, hogging, occurs as the crest of the wave moves to the center of the ship and the trough of the waves are at bow and stern.

As a ship moves through the waves, the hull must withstand repeat flexing of the ship. This should not happen, as the engineers who design these ships follow rules to ensure the transverse “section modulus” of the vessel is sufficient to handle extreme stresses. Container loading could be one cause. While the container loading looks even in the photos of the broken Comfort, the weight distribution of the containers may have been uneven. Improper loading could have imperiled the ship before it left port, with loading of heavy containers in the bow and stern and light containers in the center.

The loss of the cargo can become very costly for Japan Ship Owner's P & I Association which has insured ship and cargo.

UPS Says The Love Logistics. But Do They Love You?